After running an unofficial 4.38-second 40-yard dash at the 2012 NFL Combine, it's fair to ask just how fast Robert Griffin III is in historical context. He was by far the fastest quarterback at the combine this year so far (other quarterbacks will run throughout the day). He's got the third-fastest time among all players behind Georgia Tech's Stephen Hill (4.3) and Miami's Travis Benjamin (4.37).

Among quarterbacks, he ran the fast 40-yard dash in 12 years, according to NFL Network. 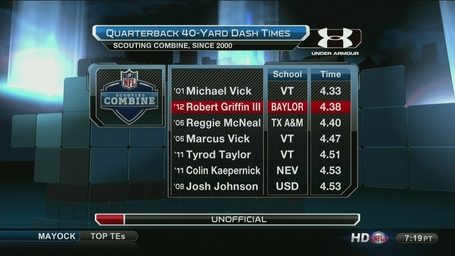 Michael Vick, the logical comparison with that type of speed, didn't run at the combine, but he ran a 4.33 at his pro day and a 4.25 earlier in his collegiate career at Virginia Tech. The other players in that universe of speed were guys like Marcus Vick and Tyrod Taylor and Colin Kaepernick last year. None of them had the arm and makeup like RGIII. It's pretty safe to say that if Andrew Luck weren't in the draft this year, RGIII would be the consensus No. 1 pick.

For more on the NFL Combine, stick with this StoryStream. To keep up on other developments in the 2012 NFL Draft, go to Mocking the Draft.