NFL Draft: How Well Do Teams Draft At Skill Positions?

Your dream scenario, if you're an NFL team: you find Tom Brady in the sixth round. Your nightmare scenario: your No. 1 pick ends up being JaMarcus Russell. Do teams draft well at skill positions? Here's how they did in the 2000s.

Share All sharing options for: NFL Draft: How Well Do Teams Draft At Skill Positions?

When I was younger, I didn't understand why NFL teams spent their first-round draft picks on offensive linemen or safeties. That just didn't strike me as a very fun way to spend a draft pick. Just draft the best quarterback one year, and the best wide receiver the next year, and by Year 3 you can call a Hail Mary and score a 90-yard touchdown on every other play. Boom. Super Bowls.

I still think that way, it's just tempered by the self-realization that I am a total idiot who should never be placed in charge of a football team as long as I live. And since I shouldn't, I may as well look at those who are in charge of drafting future NFL stars. When teams do spend their picks on skill positions, how well do they do? How long do those players last in the League? And do late-round picks have any real chance of panning out?

I looked up every quarterback, running back, wide receiver, and tight end drafted between 2000 and 2009 to try to find out. (I didn't include other skill positions, such as kickers, because not nearly as many of them are drafted, especially in the early rounds.)

First, let's look at how often these players are being selected, and in which rounds. 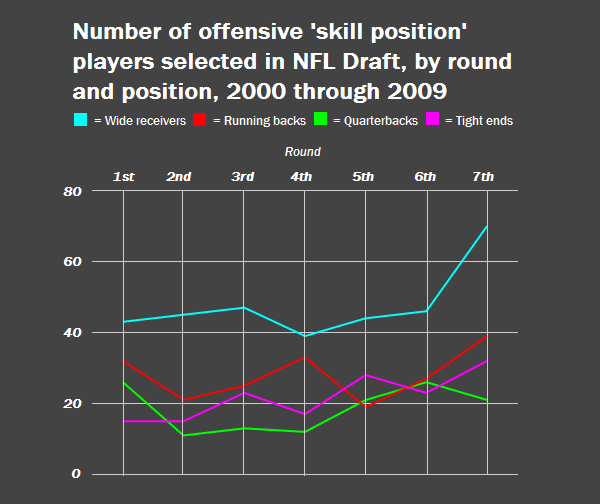 Between 2000 and 2009, 26 quarterbacks were taken in the first round, but the number dipped rather dramatically in the second through fourth rounds. Teams started selecting more quarterbacks in the later rounds.

In fact, teams seem to be fond of spending their final picks on offensive skill positions, as quarterback, running back and wide receiver selections all spike in the seventh round. I can't blame them. Final-round picks are gambles, and if I'm a general manager, I'd prefer to gamble on a marquee position. I don't know whether that's rational, but it sure sounds like more fun.

The following chart, which illustrates how long players at each position tend to stay in the League based on which round they were selected, is unsurprising, but let's take a look anyway. 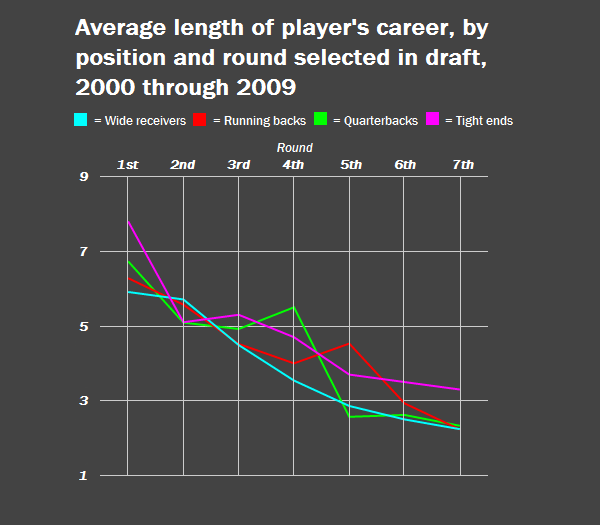 Well, actually, one thing is kind of shocking. Look at how the long-term prognosis for a quarterback completely falls off a cliff once he slips to the fifth round. On average, fifth-rounders last less than half as long as fourth-rounders -- 2.5 years versus 5.5. And, as fate would have it, the fifth round is actually when teams start picking more quarterbacks again.

To get closer to the point: how good are these players? To try to answer this question, I relied on Approximate Value, developed by Doug Drinen. Approximate Value is a statistical metric that reduces a player's overall value to a single number. I took a variant of this, Weighted Career Approximate Value (CarAV), and then found each player's average per season (so that we could include players who have only been in the league for three or four years).

Then I broke up the results by round selected, and I got this: 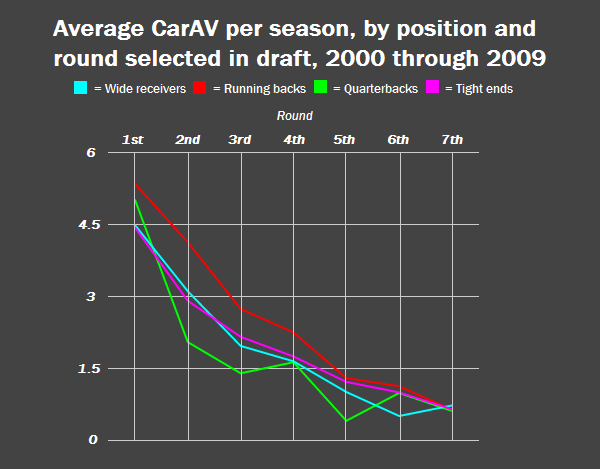 One important thing to note is that we aren't comparing the positions relative to one another, we're comparing the rates of the positions relative to one another. First-round running backs show up higher than first-round quarterbacks here, but all things being average, I would rather have a first-round quarterback because it's the most important position on the field.

So. The thing that really jumps out at me here is how quickly a quarterback's quality plummets after the first round. First-round quarterbacks scored a CarAV per season of 5.02 -- to give you an idea, that's about Carson Palmer-caliber. Second-round quarterbacks, however, scored 2.05, which is JaMarcus Russell/Matt Leinart territory.

The quarterback's overall trend here is more zig-zaggy than the others. If I had to try to explain it, I'd guess that this is because quarterback is the most complex position in the world of sports. You're a passer, a rusher, and a coach. If you're a 21-year-old quarterback you probably have tons to learn -- more than, say, a running back or tight end. You're further away from realizing your potential, and are therefore tougher for teams to qualify.

Which brings me to the lesson I think this data is really teaching us: teams are very good at gauging players. If they were flawlessly accurate draft-bots, those lines would dive almost completely straight. They don't, but they're close. It's worth acknowledging that to some degree, there's probably a chicken-egg effect going on here -- that being good depends on getting more of a shot, and you get more of a shot if they think you're good. But by and large, I'm convinced that NFL teams are very effective judges of talent.

Finally, let's plot out the draft histories of each position based on a) pick number, and b) average CarAV per season.

Tight ends aren't selected very often in the first two rounds, relatively speaking. But when a team does spend an early pick on a tight end, it usually works out pretty well for them. Tight ends selected in the fifth, sixth, and seventh rounds sometimes find a measure of success in the League, but many never even see significant action on the field. 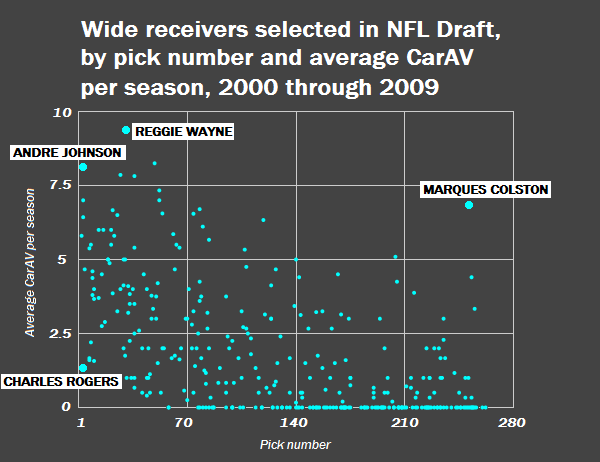 With wide receivers we see a similar story, one difference being that there's greater precedent for failure in the early rounds. About a third of all wide receivers selected in the first two rounds register(ed) an average CarAV of 2.5 or below. 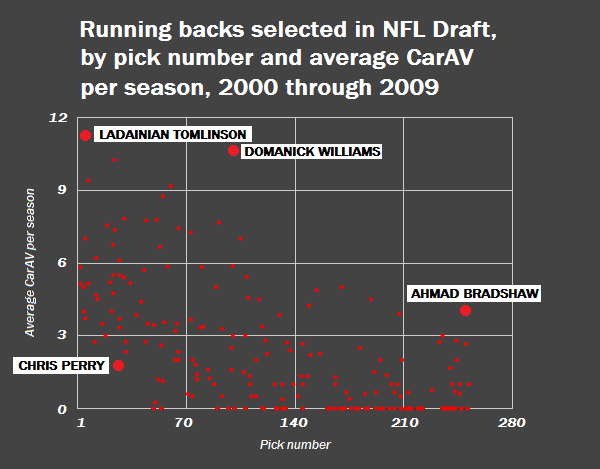 Things look a little better with early-round running back selections, but one thing's worth noting: on the whole, top-five running back selections don't necessarily pan out better than those taken late in the first round. You might get a LaDainian Tomlinson, but most of those guys sit in Tatum Bell territory. 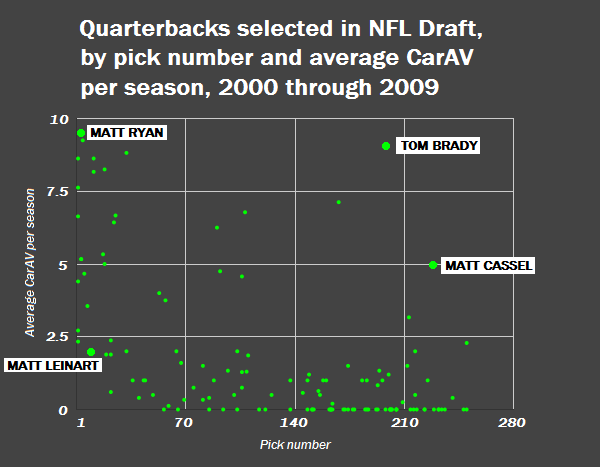 This plot is probably the scariest. Look at those dots hugging the left margin -- in other words, the top-three picks -- and observe how spread out they are. You might get a Matt Ryan, Philip Rivers or Drew Brees, but you're just as likely to end up with a Matt Leinart, JaMarcus Russell or Kyle Boller.

Good-to-great quarterbacks are relatively scarce, though, and in order to land one, you're almost always going to have to bet your first pick on him. If you settle for a quarterback in the third round or later, you're almost certainly drafting Josh McCown.