Do defense-oriented teams tend to win more Super Bowls? Does a two-week layoff impact teams either way? Does a Super Bowl team's regular-season record mean anything? Herein, we look at what the stats have to say as we lead up to the Patriots Vs. Giants on Sunday.

The other night I was talking with some friends about the Super Bowl, and I said something like the following:

The Super Bowl's just basically a coin toss, man. I mean, after a two-week layoff, it's like starting from scratch.

Given that I'm sort of an idiot who is wrong about things when asked to weigh in on them extemporaneously, I thought it would be prudent to take myself to task, look at the stats, and see how right or wrong I was. Do the things we sometimes take for granted as solid indicators -- regular-season record, strength of defense, "riding a head of steam," et cetera -- really mean anything?

Well, firstly, let's shoot down that unsubstantianted theory of mine:

A team is affected, either positively or negatively, by a two-week layoff.

Verdict: False, by and large.

There doesn't appear to be much of a large-scale trend. During the 2011 regular season, teams coming off a bye week put together a combined 16-16 record.

Even if we look at the track record of these individual teams, nothing changes. Since 2001, the Brady/Belichick Patriots hold a .789 winning percentage in games played after a two-week layoff (including Super Bowls and playoff byes). Their overall winning percentage, .778, is nearly identical. The story is roughly the same with the Manning/Coughlin Giants.

While it's quite possible that there have been isolated instances in which a two-week layoff somehow hurt a team's performance, I think we can safely conclude that there isn't a substantial trend at play. (As an aside, since this doesn't really apply to the Super Bowl: if there's anything interesting here, it's that teams don't appear to win much more after a week off, either.)

A team stands a better chance of winning if it enters the Super Bowl with a 'head of steam'. 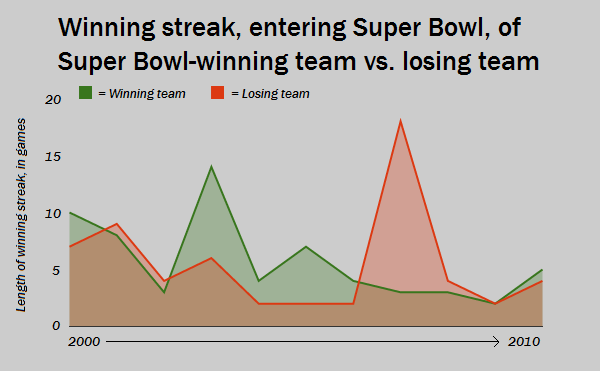 Maybe, in certain circumstances, teams do benefit from a winning streak, but the values we see above don't really indicate a substantial trend of any sort. Those two big spikes, by the way, come courtesy of the 2003 and 2007 Patriots. I decided not to count the '07 Patriots' full winning streak, which stretched back to the prior season, because the Patriots are dumb and nobody cares.

A Super Bowl team's regular season record does not matter.

Looking beyond the cliched "the only thing that matters is today" locker-room talk, it would initially seem reasonable to guess that Super Bowl winners would often have better regular-season records than their opponents. But given the league's relatively small talent gap and sample size, I don't really think you can set a 12-win team next to a 10-win team and declare with confidence that the 12-win team is superior. 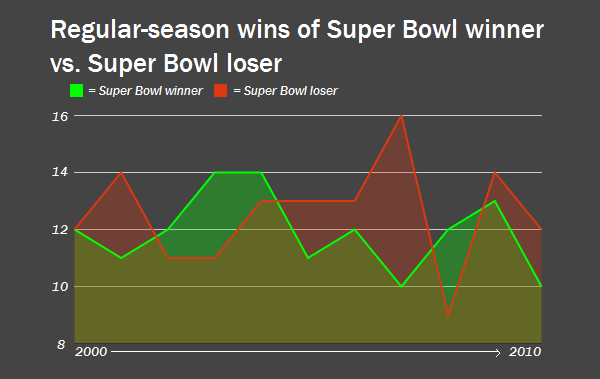 Of the 11 Super Bowls studied, 10 featured teams with different records. The team with the better record won only four of those 10.

There are several good reasons to declare the Patriots the favorite in this match-up. I suggest that their 13-3 record is not one of them.

Of this century's 11 Super Bowls, only two were won by teams whose offenses were, in the regular season, better than their opponents' defenses.

(Note: I should note here that the "points allowed" percentages of the defenses involved have been inverted. In other words, whether it's the offense or defense, higher means better on this chart.) 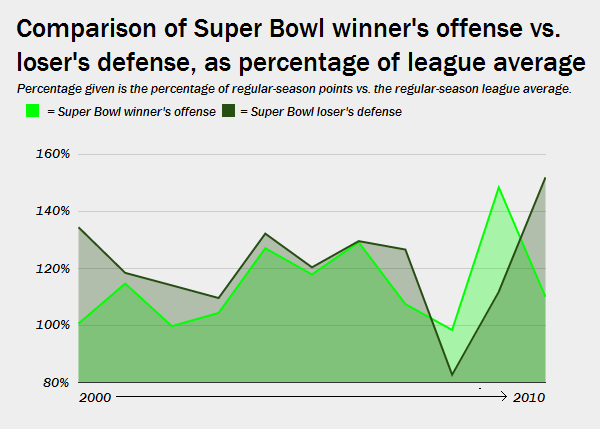 And now let's flip it over, and see how Winning Defense has fared against Losing Offense. 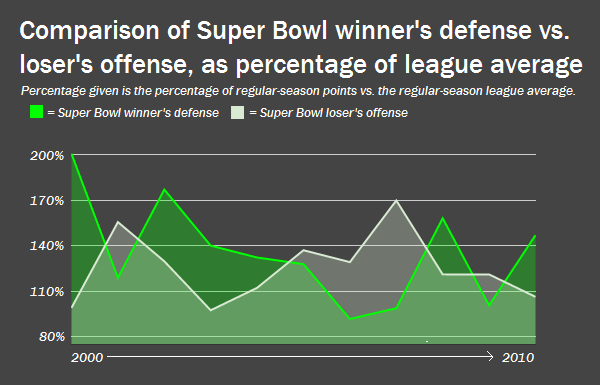 Of these last 11 Super Bowls, Winning Defense put up better regular-season numbers than Losing Offense six times. That's just over half. Once again, that doesn't really imply much of a trend. And given the zig-zaggy nature of this chart, it's hard to glean any sort of lesson from it apart from, "defense does not, as a rule, win championships."

All these non-indicators dig at a greater truth: that the Super Bowl champion might be the "better team", and it might not be. By "better team," I mean "the team you would pick to win a best-of-13 Super Bowl series." I think we would all pick the 2007 Patriots over the 2007 Giants in that mythical exercise, but the Giants won.

And maybe it's just fine this way. After catching wind of a proposal for a best-of-three Super Bowl series, my cohort @sorryeveryone argued:

football must continue to be ruled by an arbitrary but vengeful god, for the purity of the sport

in keeping with football being the most american of all sports. there will be brief, violent play. no 2nd act.

I'll buy that for a dollar.