Super Bowl Media Day Highlights: No, Tom Brady Will Not Touch Your Dragon

Super Bowl Media Day came and went on Tuesday, and we didn't learn anything new from the Giants and Patriots, but that doesn't mean it wasn't fun! Get caught up on all the highlights.

Share All sharing options for: Super Bowl Media Day Highlights: No, Tom Brady Will Not Touch Your Dragon

But yes, Media Day is definitely a thing.

Yep, that's a reporter talking to Tom Brady about a plastic dragon. 'Tis the season. Or day. Or whatever. In the name of celebrating this charade to its fullest, let's run down some other highlights.

There was Michael Irvin on NFL Network.

This makes me wish Mike, Deion, and Rich Eisen were announcing the actual game. Speaking of Deion... If anyone was ever born to perform on media day, it's gotta be Prime Time, right? Here's a collection of his greatest hits from this afternoon:

"Peyton has had an unbelievable career and in my opinion is the best I’ve ever seen play football," Eli said. "My goal is to get to his level of play. That’s something I’ve worked on."

That drew loud cheers from the more than 7,000 fans who purchased tickets to attend Media Day, many of them wearing Peyton Manning jerseys. Colts fans know they need to take every opportunity they get to cheer Peyton at Lucas Oil Stadium.

"Wait, Colts fans bought tickets to be Media Day?" Of course they did. 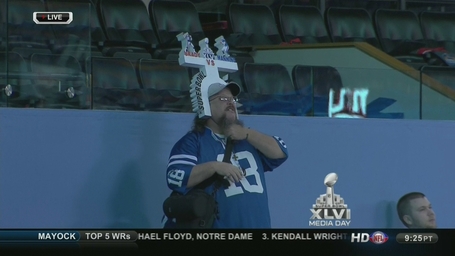 You notice the hat first, and then the beard, but that little fanny pack-type thing is what really completes the look. Speaking of style, this man right here has got it all figured out. (via) 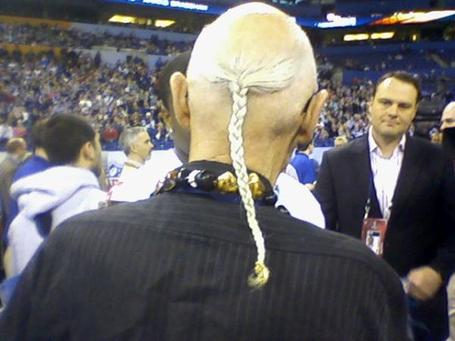 And Patriots wide receiver Tiquan Underwood begs the question: Has there ever been anyone with a Kid N Play haircut that the internet didn't immediately fall in love with? 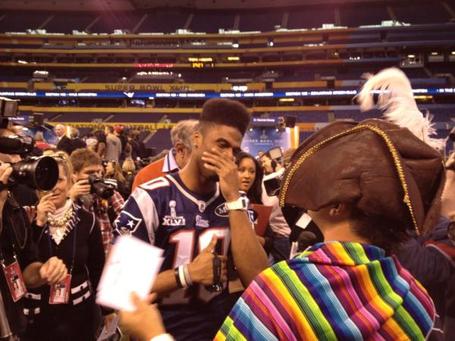 This is art--talking, living, breathing art. And you think you can just put on a funny hat and the tablecloth from a strip-mall Mexican restaurant, and just walk in here and strut with The Artist? Please. I cover my mouth at your amateurism. Pardon me, I have to speak to a real performance artist now, Adam Schefter. He hasn't seen the sun in five years in order to attain the perfect NFL reporter pallor, had his hair replaced with surgically implanted Man-stroturf to keep him camera-ready at all times. He had his soul surgically removed so he could mindmeld with NFL owners without dying from sadness. I've heard he pees once a week on Wednesdays. It takes an hour, and the screaming can be heard for miles.

Elsewhere in New England's receiving corps, Ochocinco is trying to convince everyone he's not crazy, apparently by acting like he's completely miserable.

Ochocinco was downcast during the time we spent around him, seemingly miserable and waiting for the experience to end. He was asked if he was happy. "You’re looking for the crazy Chad. He hasn’t been here all year," Ochocinco said while staring down the reporter who asked the question. "Why would I be different now?"

Asked what was different about this year: "I’m wearing a jersey. That’s the only difference."

On whether he was disappointed about his lack of production: "I don’t control that. I never have. Never been able to." 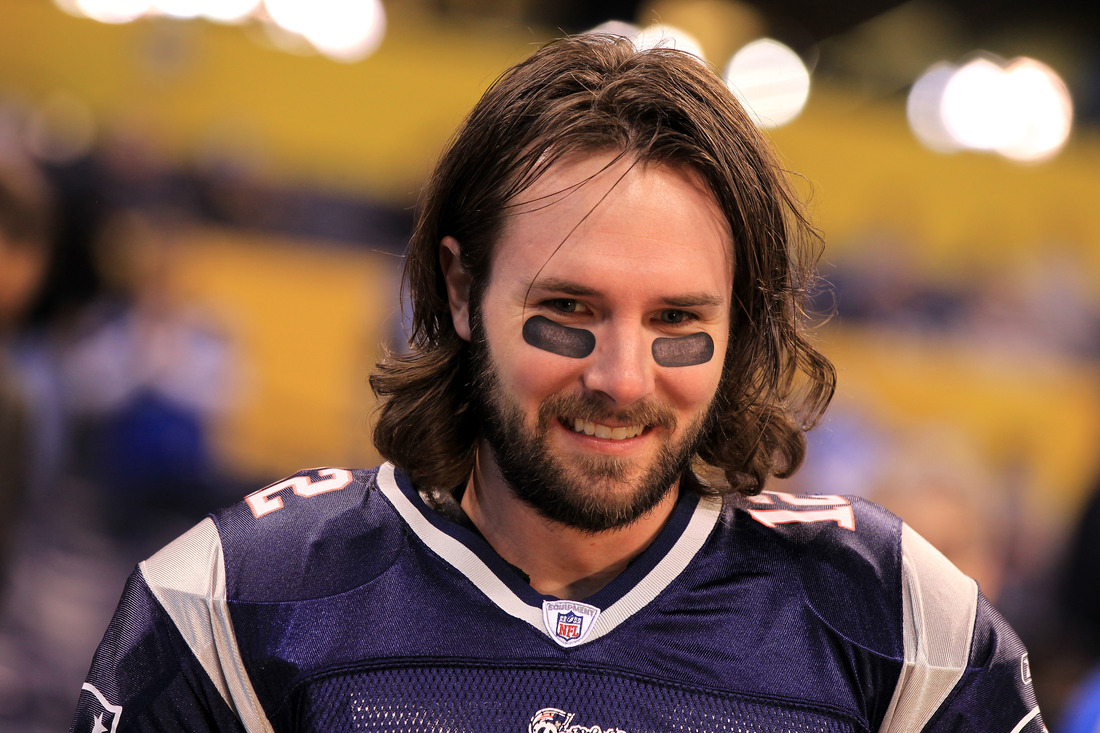 The Tom Brady impersonator would have been a much more fun interview than actual Tom Brady, who kicked the cliches into overdrive when he told reporters, "A win means everything. That's why we're here. We're trying to go out there and win this game. It's certainly not going to be easy. There's a lot of buildup around the fact that we played these guys four or five years ago but those were very different teams, too. The team that wins on Sunday will be the team that plays the best and that's what we're going to try to do, go out there and play our best." It's answers like those that makes you wish both teams had to attend Media Day drunk.

Here's Danny Woodhead, who still looks like an angsty teenager that snuck onto a football field. 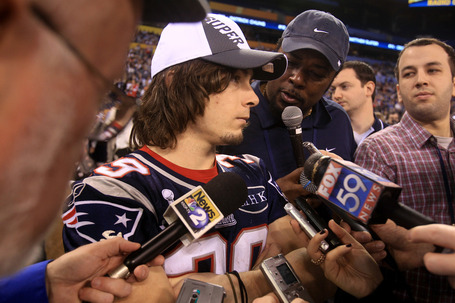 The only legitimate news of the day came from Rob Gronkowski, who wasn't wearing a protective boot on his injured ankle, which has to be a good sign for his progress toward playing Sunday. And finally, the best, most terrifying quote came from Brandon Jacobs (via Yahoo! Sports):