What If Eli Wasn't Named Manning?

Eli Manning is at the center of Super Bowl week in Indianapolis, but just like always, his brother Peyton's right there next to him. But to understand what makes Eli great, you have to look beyond the family ties.

Share All sharing options for: What If Eli Wasn't Named Manning?

As the playoffs have unfolded I've found myself rooting for the Giants, and a number of friends keep asking, "How can you root for Eli?" On the surface, he looks like a spoiled, spastic version of his big brother, part of a royal football family that just won't go away. But to understand what makes Eli great, you have to look past his bloodlines.

Eli Manning has always been famous because of his family. First when he was playing high school football in New Orleans, then throughout college at Ole Miss, then through the NFL Draft process, and even during the first half of his career. Every step of the way.

You've read this story a million times because it's been written over and over again for 15 years. It started in 1997, when Eli was a 16-year-old quarterback at Isidore Newman in New Orleans:

The two boys, Peyton and Eli, are as different as saucy shrimp Creole and a soothing mint julep. The whole family agrees about that. Olivia Peyton, their mother, says that Peyton was so organized at home, he bordered on compulsive. "He couldn't relax until everything was perfect," she said. "He'd be fluffing all the pillows on the sofa to make sure they were right."

He may never become Peyton, but Eli is a legit quarterback.

This is the sort of backhanded praise that's framed his entire career.

In 2001, the lede from a New York Times story on Eli at Ole Miss: "From the juke joints of the Delta to the feed stores of northern Mississippi, he is called Archie's boy, a son of one of sports' most famous Sons of the South. In Tuscaloosa, Ala., in Knoxville, Tenn., and in every other castle in the Southeastern Conference football kingdom, he is Peyton's brother."

In 2003, from USA Today: "Like his father, Archie, and older brother, Peyton, before him, however, Mississippi quarterback Eli Manning appears to have fallen into the close-but-no-cigar family routine."

In 2004, the day he was drafted: "It started in kindergarten. Eli Manning would join his classmates at recess, and they would already have a position picked out for him. Many of the children knew that Eli's father, Archie, had played in the National Football League. Some knew Eli's older brother Peyton, who was a neighborhood legend as a preteen. The decision was simple. Eli was playing quarterback again."

In 2004, the day after he was drafted: "Can he be as good as Peyton Manning, the NFL's co-MVP last season? ... Did the Giants get another Peyton Manning or just a player with the same last name?"

In 2008, after Eli pulled off one of the biggest upsets in Super Bowl history, it was another excuse to highlight the Mannings. As the Washington Post wrote: "When the New York Giants beat the Patriots in a stunning Super Bowl upset Sunday night, they did more than merely keep New England from completing an unbeaten season ... The Giants also gave a second straight Super Bowl triumph to the Manning quarterbacks, as Eli reached the pinnacle a year after his older brother, Peyton."

Even this week, Eli's family still frames his success. From Newsday (subscription required):

Peyton was very much on Eli's mind yesterday after the Giants arrived in Indianapolis for a week of preparation for Sunday's game. He thanked him for all his support over the years. And he even brought us back into their childhood in New Orleans, when Peyton occasionally would beat up on his younger brother.

"He'd pin me down and take his knuckles and knock on my chest and make me name the 12 schools in the SEC," Eli said. "I was 6 or 7 at the time, and I didn't know them, so I quickly learned them. It was a great learning technique, but I don't suggest anyone duplicate that or try that out."

"Once I figured those [SEC schools] out, we moved on to all 28 NFL teams, so I had to get my studying done for that," he said. "The one I never got was naming 10 brands of cigarettes. When he really wanted to torture me and I knew I had no shot of getting it, that's when I started screaming for my mom or dad to save me."

None of this is surprising. The Manning family has all the mystique to football fans that Camelot does for political nerds and Vanity Fair readers. In either case we're talking about surreal levels of fortune and success, and just enough mystery to keep everyone fascinated for years. It's nobody's fault that Eli's seen as a Manning first.

But what if he were just a quarterback from New Orleans who emerged from obscurity to become a superstar in the SEC, then graduated to New York City and the NFL, where he overcame growing pains and skeptics to lead one of the most memorable upsets football's ever seen? Doesn't that sound like someone America should be obsessed with?

Back in August, Eli had the audacity to say he's in the same class as Tom Brady, the quarterback he outplayed in the Super Bowl four years ago. This quote followed him all season, usually in the form of an awful Sports Talk teasers, "Is Eli Eli-te?" This should have been a short debate.

Mainly because the people who insist on qualifying players as "Elite" or "Not Elite" are generally the same people who look at a Super Bowl as the ultimate trump card in that debate. Eli has that trump card. He came up huge on the biggest stage possible. You can't see the first conversation as black-and-white and see a gray area in the next. But Peyton colors everyone's vision.

It's impossible to look at Eli without seeing shades of his big brother, and next to his big brother, it's impossible not to see where Eli comes up short. Peyton's taller, stronger, more accurate, more commanding, and more consistent. Peyton personifies the word "elite". With Eli, the first question's always been "Is he as good as his brother?" and any objective measure says no. That alone makes it hard to take him seriously. Next to Peyton Manning's Brad Pitt, Eli seems more like Owen Wilson.

But if Eli wasn't named Manning, he wouldn't have spent his whole life being compared to Peyton, and instead of looking down on his goofy style, we'd celebrate his ability to win that way. Instead of some off-brand version of his big brother, Eli would be a whole different commodity.

And he IS a whole different commodity. That's what we've started to see throughout the NFL Playoffs. If he wins Sunday, we'll have no other choice but to appreciate him apart from his brother. Next to someone like Peyton or Tom Brady or Drew Brees or Aaron Rodgers, Eli's nowhere near as perfect or consistent, but he's every bit as deadly--the guy who can look truly horrible against the Redskins in Week 15, then turn around a month later and beat the best team in the NFL on the road.

This is the problem with framing Eli next to his brother, or even Tom Brady. It distracts us from what makes Eli Manning so much fun: He isn't just elite, he's unique.

The best moments in sports come when ordinary humans do extraordinary things, but these are too rare to keep us interested. If you watch enough sports, you start to focus on the best players, and watching sports becomes more about gawking at extraordinary humans. But there are still moments when it all comes back to square one; this is where watching Eli is so much fun.

Any other "elite" quarterback in the NFL seems superhuman 98 percent of the time; Eli's the one who still looks just ordinary enough to make the extraordinary seem completely incredible.

I've spent the bulk of the playoffs trying to explain why I love Eli, and the best answer I have is this: Football bills itself as a science of X's and O's, but sometimes that science is a lie, and Eli's the proof. We look at him as continuing a tradition of greatness, but if he weren't named Manning, we'd see he's doing just the opposite. He does greatness like nobody else in football--herky-jerky throws, foolish bombs off his backfoot, looking lost for an entire drive or an entire half, then coming up bigger than anyone just as soon as everyone's ready to write him off.

For all of today's hyper-competitive, obsessive-compulsive icons who ooze brilliance as a rule, there are others with a pathological obsession with pranks, a mama's boy complex, and a stupid grin glued to their face way too often. And sometimes they win, too. How can you root against that? 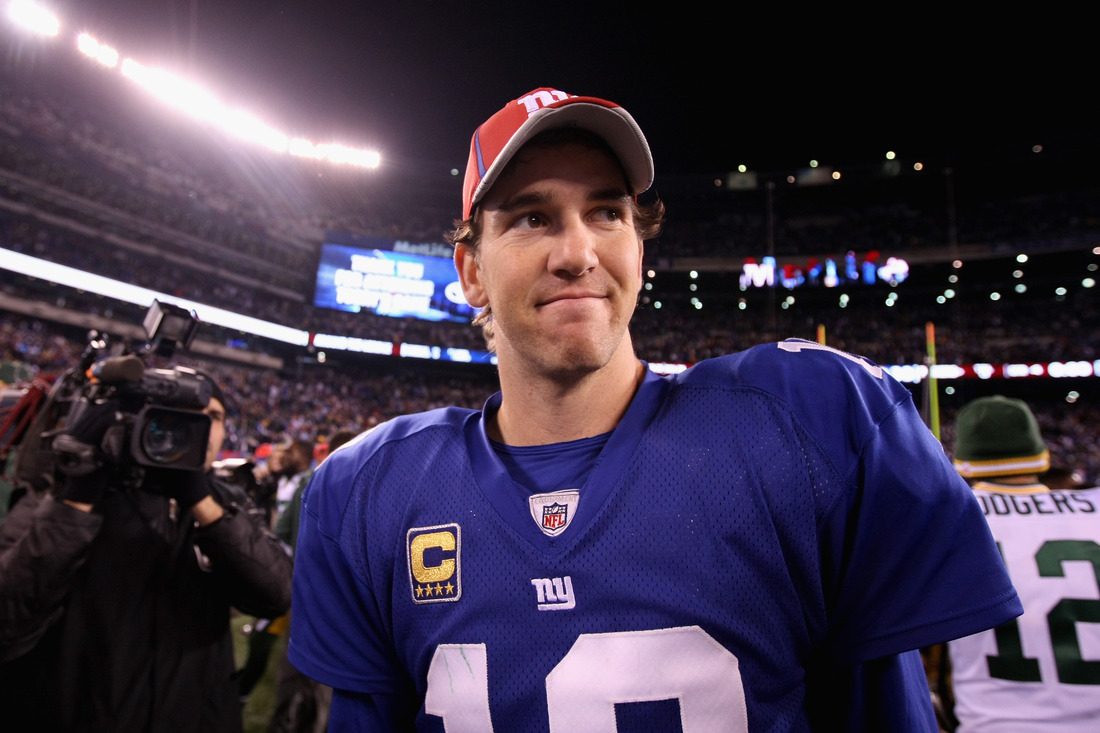