Super Bowl Talking Points: Rob Gronkowski Will Play On Sunday (Of Course He Will)

Rob Gronkowski will play, Gisele Bundchen wants her friends to pray, Tom Brady loves the feel of a brand new pair of socks, and NBC is not taking any chances with their Super Bowl broadcast. All that and more, in another edition of Super Bowl talking points.

Share All sharing options for: Super Bowl Talking Points: Rob Gronkowski Will Play On Sunday (Of Course He Will)

Rob Gronkowski has been in the news for the past 10 days, as everyone wonders whether a severe ankle sprain will keep him out of Super Bowl 46 in Indianapolis. Thursday we got an answer.

According to ESPN's Adam Schefter, "Barring a setback in practice this week, Patriots TE Rob Gronkowski will play in Super Bowl XLVI. Expected to be limited at practice today." But we knew this, right? It's an open question as to whether he'll be able to contribute on one-and-a-half legs, but it never should have been a question as to whether Gronk was gonna play.

Football players play through pain all the time. If guys will risk doing irreversible damage to an injury that's going to last the rest of their lives just to suit up for something like a Week 11 game against the Bucs, then yeah, they pretty much have to be in a wheelchair to sit out the Super Bowl. Especially somebody like Rob Gronkowski, who seems like the sort of fella who doesn't necessarily feel much pain.

Related: It's great to have Gronkowski around for the Super Bowl, if only because the world always needs more shameless meatheads, and there's nobody more shameless than Gronk.

Except maybe his brother.

Somebody should live-blog the Super Bowl from Gordie Gronkowski's sub-conscious. Their whole family is really something special, and if the Patriots win the Super Bowl, there will be an UNFATHOMABLE amount of Jagerbombs consumed at the Gronkowski family victory party.

(His laugh at the end of that clip is the most meathead laugh of ALL TIME. He's pretty much the jock from every '80s high school movie, brought to life on the biggest stage in sports. So, so perfect.)

Gisele wants her friends to pray for Tommy. Of course the New York Post would publish a private e-mail that Gisele Bundchen sent to friends asking them to keep "Tommy" in their prayers this weekend. That's a given. Putting it on their cover was a nice, extra-sleazy touch, though. 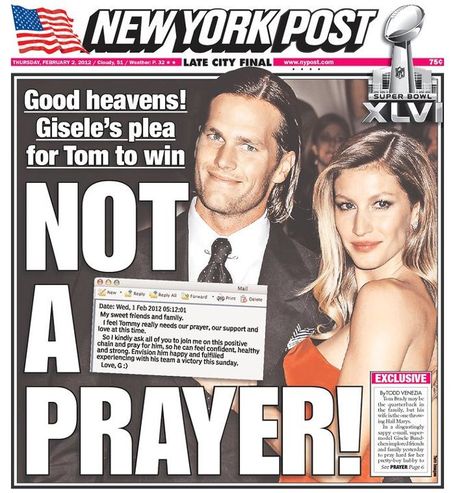 The text of the e-mail:

My sweet friends and family. This sunday will be a really important day in my husband’s life. He and his team worked so hard to get to this point and now they need us more than ever to send them positive energy so they can fulfill their dream of winning this super bowl . . .

So I kindly ask all of you to join me on this positive chain and pray for him, so he can feel confident, healthy and strong. Envision him happy and fulfilled experiencing with his team a victory this sunday.

Thank you for your love and support. Love, G :)

"LOL! The supermodel wants people to pray for him! Brady's such a p***y!" - Millions of people in New York City today, setting fire to what little shred of decency that place has left.

There are thousands of Super Bowl podcasts out there, but only one of those podcasts features Big Boi from Outkast. Here he is explaining why he's a Patriots fan: "I come from a long line of players and gamblers, so you know, my and Uncles' and dem, back in the day they teams was straight Boston teams, since the days of Larry Bird, and Danny Ainge, and Kevin McHale with the Celtics, and they go way back past Drew Bledsoe with the Patriots. We Georgia boys all day, but you know you gotta have a backup plan to backup your backup plan, you know what I'm sayin?" Honestly, this podcast might single-handedly make up for every other stupid thing that happens during Super Bowl week.

NBC takes no chances with their Super Bowl coverage. Via Deadspin:

This past Monday, two NBC crew members went to Fishers High School, in Fishers, Ind., to teach the school's football team the Patriots and Giants playbooks, offensive and defensive. On Friday, the Fishers Tigers will take the field in Lucas Oil Stadium to run a dress rehearsal, so that NBC can work out the camera positions for the whole assortment of formations and plays—and for all the contingencies that might arise from them.

"I'll have a guy run 100 yards up the near sideline as close to it as he can," producer Fred Gaudelli said. "I want a guy two yards, five yards, and 10 yards behind him. At every increment, I want to see which camera got the best look."

I know it's a big game and everything, but that's completely insane.

This is how you serve sandwiches on Super Bowl Sunday. 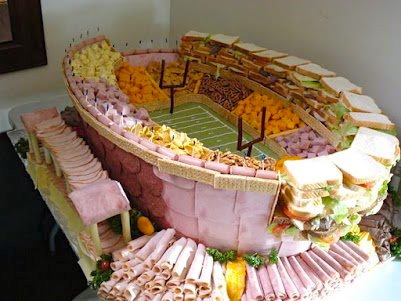 Check out some other sandwich stadiums here.

IMPORTANT NOTE. The beginning of PR e-mail I received this morning:

Watching the Super Bowl this weekend? Data suggests that 70%* of you will have a tablet in hand when doing so. And this year, Yahoo!’s IntoNow app (named best social networking iPad app of 2011 by Apple) is bringing a "second screen" experience – that lets you read up on the players, see what the social buzz is about the game, and re-hash the best moments from the game… and win Pepsi for life.

NOTE: If you're not in the media and working during the game, and you're one of the 70 percent* with a tablet in hand at your Super Bowl party, there's 100 percent chance you're kind of a douche.

None of that's true -- except for some of it, probably -- but here's ESPN's excellent Liz Merrill with 12 (real) details about Tom Brady that you probably didn't know. My favorite:

In those pride-swallowing days at the University of Michigan, when he was constantly trying to prove that he deserved to start, Brady used to sit up at night with his good friend Aaron Shea and talk about what they'd do when they made it big. Shea, a tight end for the Wolverines, used to rattle off the typical 20-year-old dream purchases. He wanted a Hummer and a Ferrari. Then Shea would ask what Brady wanted.

Gotta say -- dead serious -- that's the exact same dream I've always had. There's no better feeling than putting on a new pair of socks and wiggling around your toes, feeling the fresh fabric rub all over your feet. Doing that every single day? THAT'S when you know you've really made it.

But yeah, we're talking about socks now. Probably time to wrap it up. 'Til tomorrow...

Rob Gronkowski Undergoes Surgery On Injured Ankle, According To Report