The Victorious Sad Men Of The Every Super Bowl Club

Share All sharing options for: The Victorious Sad Men Of The Every Super Bowl Club

They seemed like the saddest men on the planet: showing off buttons, holding up frames of men with lacy autographs tossed over a corner in silver marker. They were the men of the Never Miss A Super Bowl club, and you knew about them because Visa, a Super Bowl sponsor, wanted you to know about them.

I really tried to figure out why this seemed so profoundly sad. Hobbies are always a little sad: they're this thing you do by yourself, and that in itself is kind of sad to outsiders because there you sit, painting away at a model airplane or chipping solitary balls onto a practice green out of a bunker. Taken alone without context, to an outsider a hobby looks like the way you choose to twiddle your thumbs until death. That by itself is sad.

The idea of your hobby being attending Super Bowls was doubly sad, and one word explained it: Toyotathon. 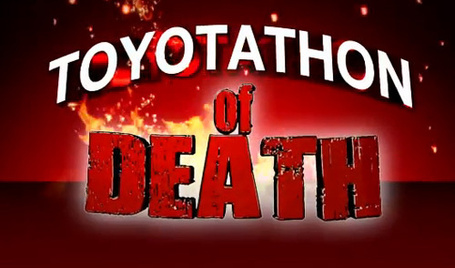 My parents were very fond of weekend car shopping. They would spend weekends just test driving car after car after car, rarely buying one, but forever testing the patience of sales people while my dad took the car a full 15 miles over the speed limit. (Unintentionally: my father has no understanding of space, time, or why you wouldn't make a car salesman flop sweat taking a 35 mph turn at 60 on a test drive.)

I never saw Toyotathon in any of the places we visited. Toyotathon is the car party that never ends, or ever existed, or is in fact real, fabulous, and is the best party you've never attended. Somewhere amidst the balloon gorillas, streamers and shiny cars, there was no party, no banners waving, no confetti guns going off, and certainly no dancing. It is merely the fall clearance event for Toyota dealers, and is meant to move product -- much like the Super Bowl, the overwrought, bloated nowhere of a game designed to blowout the NFL's inventory of content and cap a successful football sales season. Going to either for a holiday seems like a hollow waste of full hours, and is full of the sorrow you reserve when you accidentally ask older co-workers about their weekend plans.

The Super Bowl is a fully Toyotathon'd event, paired with so much commercial hoopla it cannot possibly live up to any expectations you might have of it. You will still watch it. It is a game, albeit one with an attendant commercial superstructure soldered to it, one so large it cannot possibly help but dwarf the game itself by scale and artifice. There is real sporting drama to be had, and it will be piped into your home with an ease and lack of effort on your part that borders on the shameful.

You will have Eli Manning, the worst first-down quarterback you've ever seen and yet simultaneously one of the best third-down quarterbacks you'll ever see. You will have Tom Brady, a quarterback whose casual, shuffling brilliance has now crossed into something close to glorious boredom. This boredom is why sportswriters have to pump storylines about how "focused" Brady is. It lets you know he is not in fact just rolling through green-lit targets on an infrared grid, and is in fact playing the quarterback position like a "human" QB would.

Vince Wilfork will throw grown men bodily out of his way. Justin Tuck will, in all likelihood, lay malicious hands on St. Thomas of Foxboro. Bill Belichick will glower, and Tom Coughlin will stand there looking shocked that something has dared happen in front of his eyes. Tom Coughlin reacts like this to everything including breakfasts, childbirth, and sunsets. Ignore him at all times.

The oddity comes in the viewing experience of the Super Bowl, which now in the third internet geological era seems so dated, clumpy, and unlike the rest of your viewing life. Typically, as a sports fan digesting content streams, you exist completely alone in your viewing booth. There is the event, and the announcer, and perhaps some form of social media you enjoy taking with you. You oblige the network by paying attention to the commercials, and then making fun of them on Facebook or Twitter. (Okay, mostly Twitter, which is the perfect ecosystem for snark to blossom unfettered by boring length or facts.)

The Super Bowl refuses to let you do this, mostly through the obstruction of sponsorship and the insistence to pander to every imaginable person who could conceivably be watching the game. Six hours of pregame precede three hours of action. Commercial breaks chop the game up into a long stutter of arrhythmic football plays. The announcers, already shooting at the knees of the least football-literate, dives even lower with the addition of hundreds of millions of new viewers.

The game is the sporting equivalent of your mother discovering Facebook, an exercise in awkward forced sporting community-building sponsored by Visa, aimed toward a demographic that by including everyone does not exist. With so many stakeholders, and so much invested in a single game, the Super Bowl as an entity is a gilded platypus, all flippers and spare parts tacked together by a committee made up of the most shameless, reptilian souls on the planet. It is Toyotathon'd to the gills, and so much the worse for the viewer as a result.

(You may now be imagining Al Michaels riding atop a giant platypus with a saddle and giant billboards stapled to its sides. You are welcome.)

The Bible tells us to love our neighbors, and also to love our enemies; probably because generally they are the same people.

This is when you meet your neighbors, so to speak, here at the Super Bowl, and find out that the bubble between you and reality is not only durable but opaque. You say, "Oh, Madonna? She's so not even charmingly retro." The woman your neighbor brought as a date is thrilled. The universally-panned Ferris Bueller ad you saw on Monday online, and hated with every fiber of your being? Your cousin thinks it's brilliant, and really wants you to send that to her on Facebook when she gets around to signing up or logging on or whatever she doesn't use the computer for much.

Someone will ask if Eli Manning is related to Peyton. These are your neighbors, friends and family members, and you have either assumed way too much about them, or not enough.

Bringing us back to the original point. I still think the Every Super Bowl Club guys are sad figures, mostly because I cannot fathom the satisfaction anyone could squeeze from the process of attending the world's largest corporate junket, a junket that occasionally has a quality asskicking football game attached to it. I'm not going to Indianapolis for anything, and I certainly won't pay thousands of dollars to watch an event I'm not personally invested in by team. That's an abhorrent, slatternly definition of fandom at best. You might as well collect badges for plumbing fixture conventions.

Someone probably does, and more power to them. As bizarre and pitiable as the Every Super Bowl Club guys are, they deserve some praise for being willing to go somewhere to see something, even if that something was a football game devoid of any color played between two very tired football teams on a blank canvas for the benefit of television advertisers. Those guys probably have no hesitation about talking to total strangers, or admitting that despite the lack of glamour, you know what? Indianapolis was pretty nice, and yes, they did enjoy that meal they had at the Olive Garden, not because the breadsticks were great, but because that waitress was so nice, and they hope she's doing well after the warm and not un-genuine talk they had over a meal.

They would have some authentic human interactions amidst all the Toyotathonage. This might not be totally terrifying to them. In this particular exchange, that puts them behind the wheel of the new car, sad octogenarians of the Every Super Bowl Club. The rest of us leave the dealership with little more than a test drive, and the knowledge that if the Super Bowl does nothing else, it lets you know how comfortably alone you really have become.