25 Super Bowl Prop Bets On The Patriots, Giants, Peyton, And So Much More

Super Bowl prop bets are an annual tradition right up there with Christmas, and with the Patriots and Giants getting ready for Sunday, it's time to prepare ourselves. Check out some of the best bets on the board.

Share All sharing options for: 25 Super Bowl Prop Bets On The Patriots, Giants, Peyton, And So Much More

The Super Bowl itself is something like New Years -- endless hype, weeks-long preparation, everybody calls in sick the next day, etc -- but for the people who bet on sports, the Super Bowl is more like Gambling Christmas. And nothing marks the occasion better than the prop bets.

You're probably familiar with how prop bets work, but in case there's someone out there who's NOT convinced that America has a gambling problem, these are the bets on the Super Bowl that have nothing to do with the outcome of the game. Instead of picking the Patriots or Giants, you pick heads or tails, red or yellow, hat or no hat, BenJarvus Green-Ellis or Mitt Romney, etc. It's fantastic.

NOTE: You can make good money on some of these, but that's not really the point. If someone wants to make money betting, they've already lost. Unless you put an insane amount of money on one bet and spend the game chainsmoking and twitching like a crack addict, nobody really beats the house. There are experts, sure, but we're not them. (My name is Sharp, and I'll never be a Sharp.)

The key to an enjoyable gambling afternoon is to just set aside a certain amount of money you're willing to lose -- 100 bucks, 500, whatever -- and then assume you've lost it as you soon as you bet. That way every single win feels like a bonus, and even if you lose, you still bet on Vince Wilfork, and that's awesome. With that in mind, here are some of this year's best bets. You can find more -- hundreds and hundreds more -- at just about any gambling site around. (We used Bovada.com).

In no particular order ...

1. How Many Times Will Peyton Manning Be Shown On Television During The Game?

Is this a joke? Peyton Manning has already overshadowed the Super Bowl all week long, he's overshadowed Eli for practically his entire career and he'll definitely be at the game, right? NBC will cut to Peyton anytime Eli does anything good or bad, and it'll continue all game. This is the easiest money on the board. Except for this.

2. How Many Times Gisele Bundchen Be Shown On Television During The Game?

Sorry, but if there's a supermodel at the game who's even a little bit relevant, she's getting shown at least once. If she's married to Tom Brady? We're talking Peyton territory. The next two are trickier.

3. How Many Times Will Robert Kraft Be Shown On TV During The Game?

Nobody cares about seeing the owner. Yes, Kraft is the subject of an outstanding pun on the cover of Sports Illustrated this week, but he's still a fuddy duddy owner. Unless he's sitting next to Gisele, I'm going under here. (The only x-factor is NBC showing him while they talk about his late wife, and oh wow look at that now I feel like a terrible person.)

4. How Many Times Will David Tyree's Catch Be Shown During The Game?

This one's tough. I mean, obviously NBC will be talking about the '08 game for hours on Sunday. If you include the hours and hours pregame shows, you can't possibly make this over/under high enough. On the other hand ... during the actual game, there won't be many places to shoehorn in a "oh yeah, remember this incredible play?" segment. If things get close down the stretch, then this definitely goes over. For now, it's tricky -- I'll take the over (because you can never underestimate sports broadcaster's getting nostalgic), but I'm not as confident as you'd think.

5. What Will The Result Of The First Challenge Be?

With a million cameras on the field and NBC's production team inevitably hopped up on amphetamines for the big game, the replays will come fast and often, and they'll be better than anything available during the regular season. With coordinators watching up in the booth, this has gotta increase the chances of successful challenges, right? Take "overturned".

6. Will Wes Welker Have A Touchdown In The Super Bowl?

WELKAHHHHHHHHHHHHHHHH. With Gronk hurt and New England dedicated to featuring GRITTINESS at every possible turn, it's a good bet that Welker's gonna score.

7. Will Victor Cruz Have A Touchdown In The Super Bowl?

Pretty disappointed in the lack of salsa dance prop bets this year.

8. Who Will Have More Receiving Yards -- Wes Welker Or Victor Cruz?

Again, with Gronk hurt, Welker's going to get even more looks than usual. With Hakeem Nicks and Mario Manningham facing a secondary with alarming depth issues, there's a decent chance that Cruz gets less looks than usual. Welker seems like the smart play here.

9. Who Will Have More Passing Yards?

Okay. Eli threw for 255 yards in 2008. So -- given the 59.5 yard spread -- is Vegas saying the over/under on Eli yards is 314.5? That seems like a lot, even against the Pats' secondary. For instance: Drew Brees only threw for 288 yards two years ago, and even though it felt like domination from start to finish, Aaron Rodgers only threw for 304 yards last year. Not saying Eli can't possibly outdo them, but I'd probably go safe with the under. On a related note, how awesome is it that you can bet against history in the Super Bowl?

11. How Many Viewers Will The Super Bowl Average?

Given that the NFL sets a new ratings record every other week, this game features two of the most recognizable teams in any sport, and even the Fox postgame show outdrew anything else on television a few weeks ago, it's fair to bet the Super Bowl audience will exceed expectations.

12. If Tom Brady's Son Is Shown On TV, Will He Be Wearing A Tom Brady Jersey?

Since when do toddlers wear jerseys? Definitely betting NO here. (Also: We're betting on toddlers!)

13. Which Team Will Make The Most Field Goals?

I like the Giants here, because you gotta think Eli will throw away a few easy ones early on, leading to stalled Giants drives in Pats territory.

The Giants don't seem like a team capable of blowing anyone out -- that's just not how they're wired to win -- but the Patriots at 3.5 to 1? Not a bad bet.

15. The Largest Lead Of The Game By Either Team.

On the other hand ... taking the under here is pretty tempting. Gambling is stupid.

16. How Many Yards Will The First Touchdown Pass Be?

OVER. I imagine a fifteen yard pass to about the five yard-line, where someone like Wes Welker wiggles out of a tackle, and everybody goes nuts because OH MY GOD SUPER BOWL TOUCHDOWN.

17. Will Madonna Wear A Hat At Any Point During The Halftime Show?

Betting on the halftime show is just about the only thing that makes today's halftime shows bearable. Thank God for Vegas. And the answer to this one is definitely yes. Madonna looks soooooooooo old. Old women wear hats not because they're regal or stylish, but because hats distract you from how old they look. Madonna will wear a hat.

18. Will The Game Be Decided By Exactly 3 Points?

Given the odds here, it's really not worth it to pick "No" OR "Yes". Gambling is stupid.

Both teams will be tight early on given the stakes, probably a little dazed from the cluster f**k of pregame activity, and both coaches will be happy getting three points early. FIELD GOAL.

A chance to bet against Chris Bosh in the Super Bowl? SIGN ME UP.

And those are only a few of the candidates. This is always one of the riskier plays, and betting the quarterbacks doesn't even make that much sense because the odds aren't good enough to win much. So, just remember, if you bet on Vince Wilfork, you may not win, but even if you lose, you'll feel good about your choice.

23. Who Will The Super Bowl MVP Thank First?

Teammates is the obvious frontrunner, but what's with all the disrespect to God here? You really think the MVP's more likely to thank NO ONE as opposed to thanking God? Have these people watched sports before?

24. What Will The Color Of Gatorade Be During The Gatorade Bath?

You know you've seen too many Super Bowl prop bets when you see the Gatorade odds and don't even blink. And I gotta say, Red is looking like a pretty solid sleeper. Now, finally ...

Ah, yes. The original gambling addict's prop. We bet this because it's TRADITION, damnit. And if you think it's silly to bet on something like the coin toss, just remember that A.) You're totally right, but B.) Super Bowl Sunday only comes once a year, C.) ALL prop bets are essentially betting on a coin toss, and most importantly D.) You always gotta go with tails. 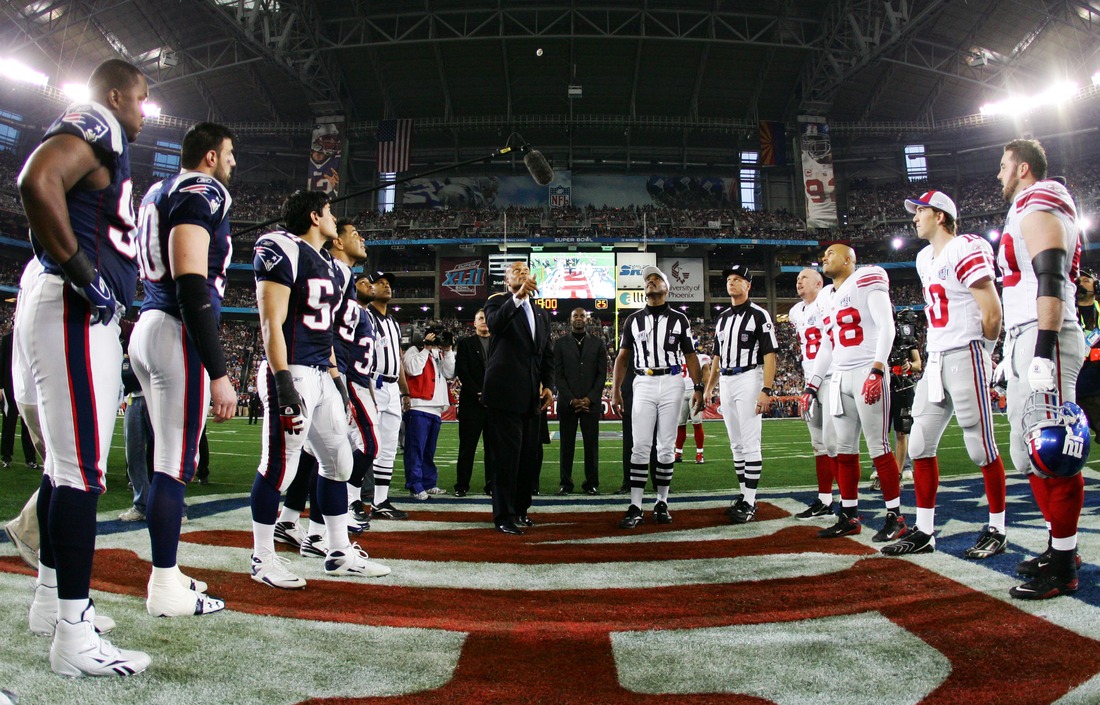