NFL Honors Show: The View From Behind The Scenes

SB Nation's Joel Thorman attended the NFL Honors event and spoke with multiple players regarding their experience. (Hint: They really like the idea of an awards show.)

Share All sharing options for: NFL Honors Show: The View From Behind The Scenes

The NFL went a little Hollywood on us and for the first time ever conducted an awards ceremony for postseason honors such as AP offensive player of the year, coach of the year and league MVP. Anything the NFL touches seems to turn to gold so, as expected, it was a terrific show with plenty of stars, both from the NFL and Hollywood.

I had a different view of the awards show than most. While those in attendance sat in the Murat Theater in Indianapolis, and those at home watched on TV, I spent my time in the XFINITY Lounge talking with the players that were honored throughout the evening. Think backstage pass.

The XFINITY couch, which has been featured on SB Nation before, is supposed to give you the best seat in the house and I'd say they did just that. 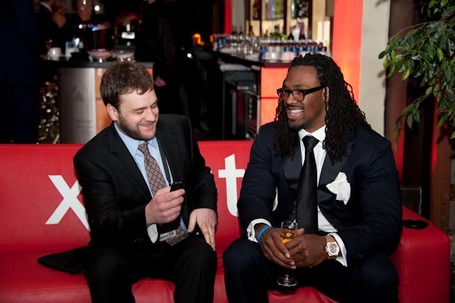 I was talking to the Steven Jackson in the picture above and as he was about to give me his Super Bowl pick, he paused, got quiet and started peeking over my shoulder at someone.

"Everything OK?" I asked. 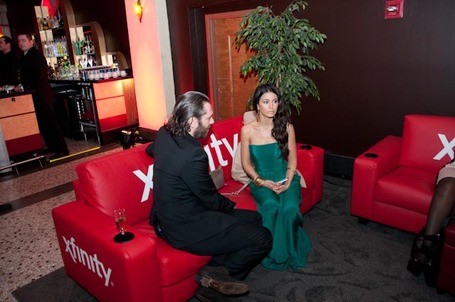 The event was done right with the red carpet and all, as if it were the Oscars. As players and coaches made their way off the red carpet, they passed through the XFINITY Lounge for a visit with Stacey Dales of NFL Network and stopped to chat in the lounge with people like Archie Manning, Alec Baldwin and Cam Newton. And, yes, Tim Tebow.

The player that many of the hometown Indianapolis Colts care about, Jeff Saturday, said it's important for the players to be recognized on a stage like this.

"As I look at what will be awarded, it's impressive," Saturday said. "I love to see the greatest players in our game be honored. It's such an important deal for our fans to realize that we're not just players on the field. We have lives off the field, too. Anytime I can be around these guys and pay respects to what they do, I'm glad to do it."

I entered the event expecting the unexpected and it delivered. On one side of the room you could see Packers receiver Greg Jennings chatting with Lions coach Jim Schwartz while Aaron Rodgers yelled at Alec Baldwin to get his attention on the other side of the room. 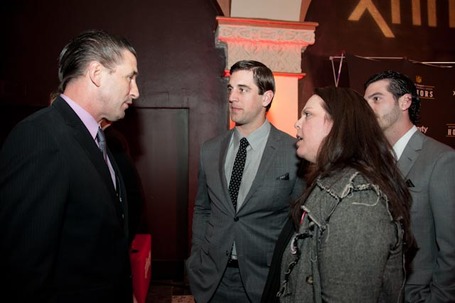 When you think of awards shows, you certainly don't think of the NFL, as Schwartz indicated, so this was new for a lot of the players.

"I'm usually on the other side of the ropes," Ravens offensive lineman Matt Birk said. "I'm usually at home."

Birk was honored not for his play on the field but for what he did off of it -- he was awarded the prestigious Walter Payton NFL Man of the Year award. Birk took a seat on the XFINITY couch and told me that when he first entered the league with the Vikings, his head coach at the time, Dennis Green, told the players that every Tuesday, their day off, was also a day they needed to be out in the community, and that's a lesson he's remembered ever since.

"I'm really excited about the event because the way we announced it before was leaking through the press and the AP had the rights to it," Steven Jackson said. "As big as the game is, why not celebrate some of the biggest stars and the guys who played the best that year? I think it should have a stage like this."

"The fact that I'm even here is an accomplishment for me," Bucs running back LeGarrette Blount said.

As for the awards themselves, we saw a number of players honored, including the offensive and defensive player of the year, rookie of the year and coach of the year, among others. And, yes, the various players I talked to had their favorites on who should win.

A few 49ers players, like Aldon Smith, Patrick Willis and Vernon Davis were in attendance. Smith said he was pulling for his coach, Jim Harbaugh, to win the coach of the year award and shortly after our conversation Alex Smith was stepping onto the stage to accept the award on behalf of Harbaugh. 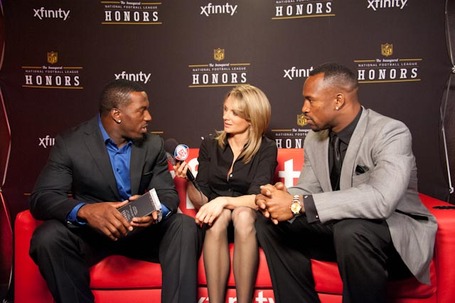 Willis said he was appreciative of what went into creating this event because keeping them on TV is what keeps the fans interested. (He was also wondering if XFINITY could hook him up with a good deal on a new TV. He was kidding...I think)

"A lot of awards to give out and a ton of great athletes," Greg Jennings said. "The one everyone is waiting to hear...hopefully my guy gets the nod."

That would be the MVP award he's referring to and, yes, his quarterback, Aaron Rodgers, took it home with 48 of the 50 votes.

One of the biggest attractions in the XFINITY Lounge was Panthers quarterback Cam Newton, who took home the offensive rookie of the year award. After he gave his acceptance speech on stage, he was paraded through the media rounds, which included a stop at a press conference with a few dozen media members. There was a TV on in the background that was playing the event and Newton paused before taking questions to see who won the next award, defensive rookie of the year. He predicted it would be Von Miller and he was correct as the Broncos linebacker took home the hardware.

As for the Super Bowl itself, the players were split on their picks. Matt Birk called Bill Belichick an "innovator," but had to pick the Giants because the Ravens loss to the Patriots in the AFC Championship game still stung. Steve Jackson said Belichick has "some sort of intangible" and thinks they'll pull out the win. Patrick Willis, whose 49ers lost to the Giants in the NFC Championship game, said New York has too many weapons and should win the game.

All in all, the NFL Honors event was a success. The players really seemed to enjoy it, the fans can't seem to get enough football, whether it's an actual game or not, and the league has found a way to honor their best players on a big stage.