The New York Giants and New England Patriots have been the star attraction in Indianapolis over the last week but after the Giants Super Bowl XLVI victory over the Patriots, it's time to head home. Both the Giants and Patriots are packing their bags and heading back.

The Patriots are scheduled to arrive back home around 3:30 p.m. (ET) on Monday afternoon.

The Giants are hopping on the plane as we type and they'll be greeted by their fans back in New York. But after they get home, the Giants still have some business to take care of -- like the Super Bowl parade. Here's a look at your Super Bowl champion Giants boarding their victory plane: 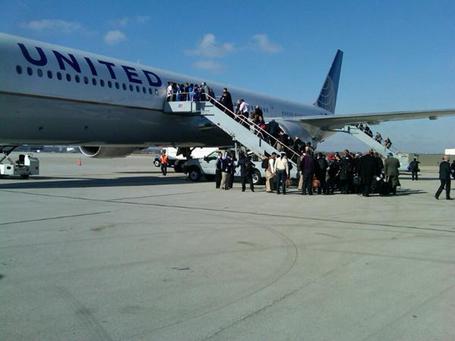 The Giants Super Bowl parade will be held on Tuesday, February 7. Here are the details of the Giants parade.

Deja Blue: Complete Day-After Coverage Of The Giants' Second Triumph Over The Pats