Turn on the radio.

I found a YouTube channel with vintage baseball stuff on it. There's a 1976 Dodgers/Pirates game, '78 Cards/Phillies, and some '80 Cubs/Giants. When I see an image like this, it's like a youth-and-peyote smoothie for me: 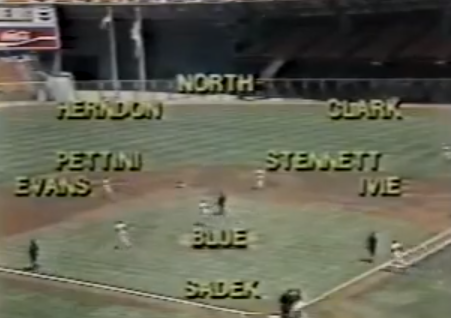 So amazing. But you can't see the video. I'm not going to tell you what YouTube channel it's on. The second something like this gets out, MLB Advanced Media will deploy an army of electronic minions. They'll force YouTube to delete the user's account, and all of the beautiful vintage baseball along with it. You seem like a nice person, but you're not worth it.

Sorry. MLB wants stuff like this taken down because they want you to go to MLB.com and not buy the vintage baseball games that they don't have for sale. Makes perfect sense.

When it comes to YouTube and Major League Baseball, there's a zero-tolerance policy. Whereas with the NBA, you can search for "LeBron mix" and get hundreds of highlight packages with the league's biggest star, MLB has dedicated full-time employees looking for things like a 30-second clip of a fan catching a Vinny Castilla foul ball in 2005. If you think that's hyperbole, it's exactly what happened to me. I spent hours getting the clip from my TiVo onto YouTube, but it offended MLB's sensibilities. Zero tolerance means zero tolerance.

Fine. I'll pay the $3.99 MLB might want for a Giants/Nationals game from 2005. Nothing's for free, and Bud Selig's $25 million salary isn't going to pay for itself. I'll pay my money to see me catch a foul ball.

Not for sale. At any price. Go away. And if you find it, it will be scrubbed from existence.

Hey, free market, baby. I get it. It's their product, and they have a right to make money with it. I remember being similarly annoyed when vintage video games became available over the internet in ROM format. Nintendo kept shutting down sites that offered games that Nintendo wasn't selling anymore. It was beyond frustrating, and it didn't make sense if Nintendo wasn't going to sell their vintage games. Then years later, the Wii came out, and Nintendo started selling those vintage games to play on the new system. Like a good consumer monkey, I bought too many of them. The business strategy made sense to me after that.

But does MLB really have a plan to digitize and upload the 100,000+ games that have been broadcast since the '60s? Is there really some sort of "Operation: Holy Crap Amazing" going on behind the scenes? If so, then this all makes sense. Something like that would make an incredible amount of money. If they keep the $1.99 pricing model that they currently have on the iTunes store for the games they do have for sale, MLB will be rolling around in liquid cash. I'm guessing that there's a plan to make a lot of games available.

I'm guessing it's not going to include the Cubs/Giants came from 1980 that I'm watching right now. I'm guessing there's a good chance that I'll never be able to buy a random, forgotten game from 30 or 40 years ago. Maybe in a couple of decades, something will become available.

Until then -- and this is the important part -- how does the availability of such a game do anything but help Major League Baseball?

The existence of a grainy, straight-from-Betamax video of the 1980 Giants isn't something that's going to make me say, "Well, so long MLB.tv subscription! Joe Pettini videos are online!" It's something that I'll send to my dad with a note asking if he remembers when Pettini gave me an autograph that one time. It's something that will make me look up Pettini's stats on Baseball Reference. Say, did you know that the only home run in Pettini's career came against Willie Hernandez, future Cy Young winner?

It would keep me engaged with baseball-related activities in the winter. It would allow me to share my memories of the game.

But until MLB Advanced Media realizes that a draconian zero-tolerance policy is something that only made sense in 2000 before they could figure out a better policy, I'm keeping this guy's YouTube channel to myself. If you really want a link, wear a carnation on your lapel, and meet me in front of the library at noon. I can't tell you which library. That would give away too much.