The Bob Famine: Athletes Aren't Named 'Bob' Anymore And There's Nothing We Can Do About It

Nearly two thousand men named Bob have played in major American sports. Bob Sanders is still playing, but he is the only one. Here, we attempt to come to grips with the most pressing crisis in major athletics.

Share All sharing options for: The Bob Famine: Athletes Aren't Named 'Bob' Anymore And There's Nothing We Can Do About It

Across the histories of Major League Baseball, the NFL, the NBA, the NHL, and NCAA football and basketball, there have been a total of 1,884 athletes who primarily went by the name Bob. Not Robert, or Bobby, but Bob.

Via Wikipedia, the story of how San Diego Chargers safety Bob Sanders came to be known as Bob:

Having been given a name that was difficult for many to pronounce correctly (Demond), Sanders asked his mother if his name could be changed. His mother suggested "Bob" as a nickname, and the name stuck.

Of those 1,884 Bobs, Sanders is the only one still playing.

I take no pleasure in being the one to inform you that the Bobs are gone. They were all around us, and now they are nowhere, and their exit was slow, silent, imperceptible. 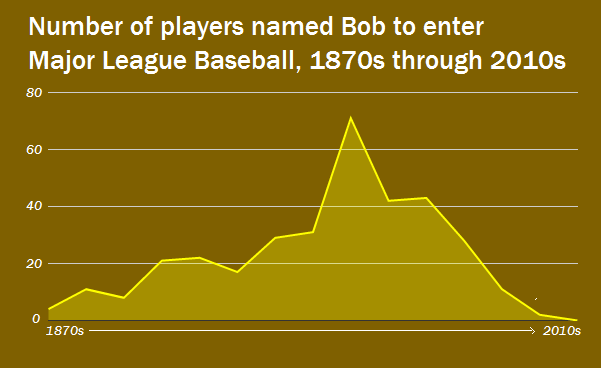 How closely is this trend a reflection of a greater trend, that of "Bob" being a less common name in the first place? That's one of the things about Bobs: they are difficult to count. Even during the Bob surplus of the 20th century, Bobs were rarely actually called Bob on their birth certificate. And that's another of the things about Bobs: they choose to transform their given name of Robert into "Bob," and in so doing enter Bobhood of their own accord.

And it is the 21st century, and nobody is interested in making the right decisions anymore. 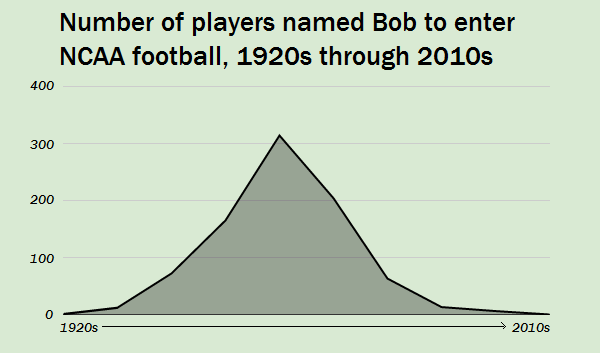 This is not an attempt to determine what is going on. We know what is going on: men are no longer calling themselves Bob. This is instead a funeral for a snappy name, decades after the term "rescue effort" ceased to apply: a wallowing in insufficience and despair. 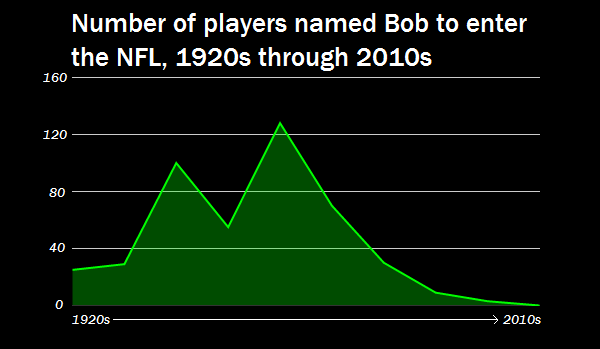 Again: only one of 1,844 Bob-athletes are currently active, and most of the rest were playing only a handful of decades ago. If that slope were a road, it would have been gated off years ago. Very few trends drop off at such a startling rate without some sort of explanation: yes, people are buying fewer typewriters in favor of computers and the like. But who usurped Bob? Where is our better Bob? 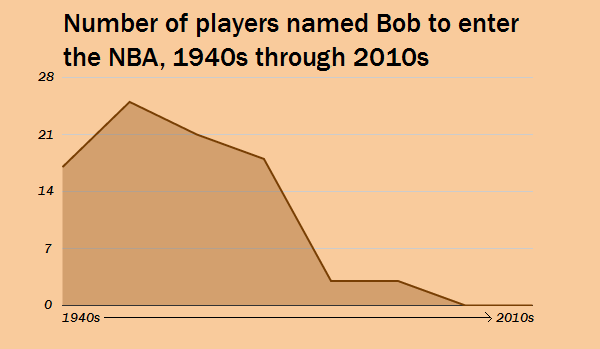 No ... these charts do not indicate a casual, gradual out-moding. They instead indicate a grand, sudden exit, all the Bobs in lockstep, leaving us at once.

Was it something we did? 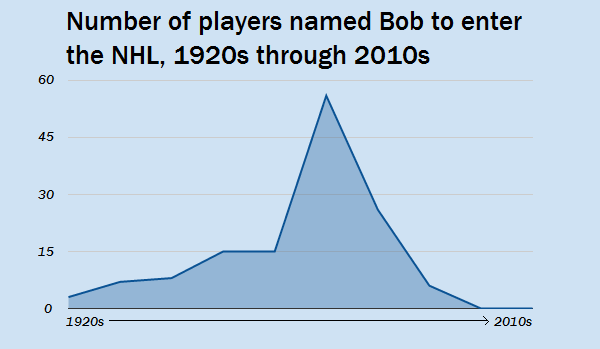 The Bobs arrived, didn't like what they saw, and left. Maybe they're off in another land, playing a sport superior to any of ours, with a ball that kicks straight and never bounces off the post. I hope they're enjoying themselves, wherever they are.

But they should know that we miss them: 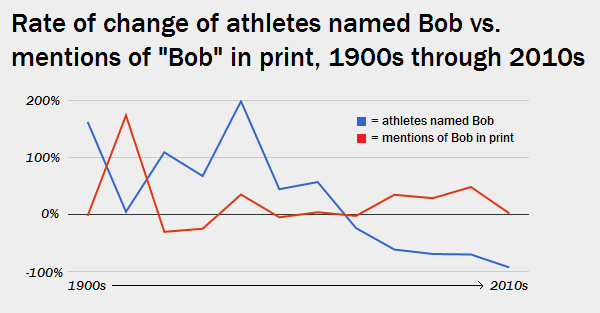 We haven't stopped talking or writing about Bobs. Sometimes, we demonize them.

But always, we miss them. Our lone remaining Bob, Bob Sanders, is a defensive player. "There goes Bob with the ball. A terrific score by Bob!" We will likely never hear it again. I invite you to scour through every "top high school prospects" list in the land, as I did. There are no Bobs.

But it isn't simply that we as athletes, as fans, as experts, as blowhards, will have to find our way without Bob. Indeed, we have now been doing so for decades. We never imagined we would stand on our own, and here we are, careering into a Bobless future without a jet pack or a second thought.

I have to think that we will make it without Bobs, that we will be just fine in the end. But we will be poorer for it, and I suppose the only proper thing to do is to thank the Bobs for attending, hope they enjoyed themselves, and wish them well on whichever journey they find themselves in this uncertain age.

Goodbye, Bob. You sure were something.