The Greatest Animated Sports GIFs Of 2011, Numbers 35 Through 31

In 2011, fans made hundreds of animated GIFs of the best, worst, silliest, and most amazing moments in the world of sports. Here are the 50 greatest animations we saw all year.

Share All sharing options for: The Greatest Animated Sports GIFs Of 2011, Numbers 35 Through 31

There is no way that the guy who got hit in the face with the football is a high school kid who got lost on his way to the bus stop. Stop it. Stop that right now, Jon. There are plenty of reasons why someone would wear a backpack on the sideline. Maybe he's carrying filming equipment for that cameraman or something. Maybe an extra football, or just general football miscellanea! I mean, there has to be one guy who has extra kicking tees or end zone cones or something on hand, right, just in case?

Yes, yes, I know, it looks like a school uniform. Knock it off! Plenty of grown men wear khakis and a white button-down shirt, okay? I mean, listen. Do you really think--

Aw, f*** it. Yeah, okay, this is a 16-year-old who never made it to school on Monday because he just wandered aimlessly through New Jersey and found himself in the Meadowlands and then he got hit in the dome by a football and it is hilarious. That is totally what happened. You happy, Jon? Listen, you can make one snide remark. One. And then we're done, because we have a lot of other GIFs to get to. Make it good!

Well, this guy may not have found the bus stop, but HE STILL GOT TAKEN TO SCHOOL! WOOOOOO

This GIF was originally funny to me because Carlos Boozer was left hanging. And now I'm looking at it again, and it's way funnier, because I just noticed that there are THREE people in this GIF who are offering up un-answered high fives. Four if you count the headless suit in the upper left.

33. Matt Forte has to go now, his planet needs him

I just spent like 15 minutes trying to express my feelings on this GIF, and I think this is just about the best I can do.

32. Cliff Lee declines to run out his own grounder

I'm a firm opponent of the designated hitter rule, because just as I love to watch a punter try to scoop up a bad snap and try to throw it, or see a 7'1" center with no range try to chuck up a last-second three, I love watching pitchers hit.

Never will I come closer to seeing what it would be like if someone with my skill set tried to perform on a professional level. I mean, how nuts is this: in the National League, five to 10 percent of all at-bats are taken by men who, by everyone's admission, are profoundly bad at it! It's Dada performance art, and the ubiquity of such comical nonsense -- over the course of a game, a season, and the history of baseball -- is unrivaled by anything in any other sport.

This GIF features a delightful bonus: the catcher starts jogging to the dugout well before the play ends. It's beautiful. 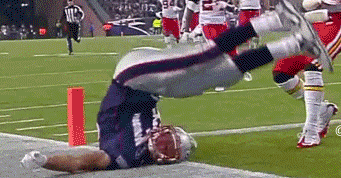 As I type this, this man, Rob Gronkowski is not only alive, but well. Right now he's probably watching his favorite television show or making macaroni and cheese or having a conversation about Mazdas or something. Things that alive humans do. Remember, I am talking about this guy.

It looks like a human being as plated with artisanal finesse at a Michelin-star restaurant, with a head as garnish. No no no no no. Not interested in this GIF anymore. Not participating. PLEASE CLICK TO THE NEXT PAGE PLEASE AND THANK YOU