You saw the homer, but you might have missed everything that preceded it. Here's a look at one of the greatest at-bats you'll ever see.

Share All sharing options for: Jayson Werth and Lance Lynn: Pitch by pitch

Jayson Werth hit a walk-off home run off Lance Lynn in Game 4 of the National League Division Series, and it forced a deciding Game 5. You've probably seen the highlights, whether on ESPN, MLB.com, or MLB Network. But a lot of those highlights just showed the home run. It was a beautiful, majestic home run -- the archetype of what a right-handed hitter's home run should look like.

There's more to the at-bat, though. It was the greatest at-bat we'll see in the playoffs. That might be a premature prediction, especially since Jay Bruce had one almost as good just a couple hours earlier, so there's obviously room for plenty of great at-bats. But if there's a better at-bat than Werth's this postseason, it will be a major, major upset.

Jayson Werth vs. Lance Lynn, a miniseries in 13 parts: 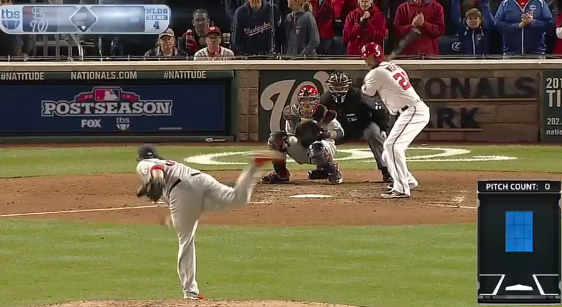 As far as first pitches go, this is just about perfect. Right at the knees, with movement. One of the announcers said this pitch had fuzz on it, but I think they were talking about Werth. Or Lynn. 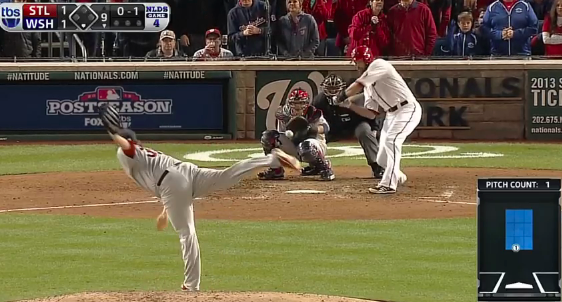 Even better than the first pitch. The movement brings it back to the plate, and it's a clear strike. Werth can't get a swing off.

Batters did just a little better against Lynn, hitting .182/.203/.312 with an 0-2 count, but that's a small sample. And remember: Lynn was a starter for much of the year, and he has a starter's repertoire. In addition to a fastball, Lynn throws a superb curveball and a changeup. 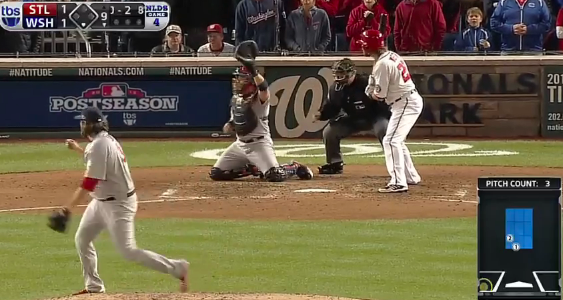 A waste pitch that Werth wasn't tempted by. Instead of showing you where the ball bounced, I figured I'd use this picture of everyone looking in a direction where a baseball should not be. 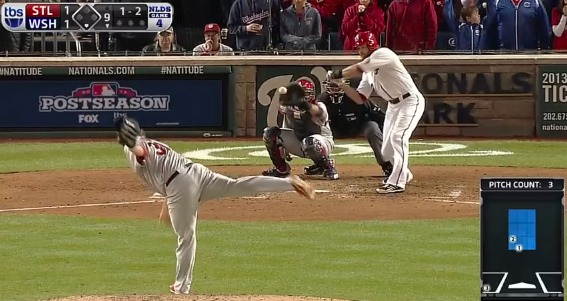 This was a great location, especially following the curve in the dirt. The picture below this one will show you where the TBS tracker had it -- just high, just outside. Werth somehow laid off. And while the location was great, the velocity was improved, too. A 96 m.p.h. fastball? It was probably just adrenaline, and Lynn would be back to normal after this pitch. 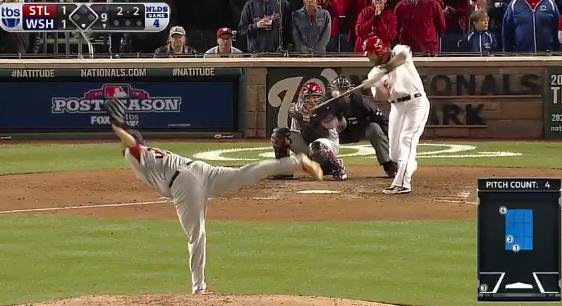 Nope. Lynn's lowest average fastball of the season was 91.9 m.p.h. His highest average fastball was 94.9, also in relief. Against Werth in the ninth of a possible series-clincher, he was throwing as hard as he'd thrown all season, and he was getting great location. This one ran right up the bat, and Werth fouled it away; it's a wonder that the bat made it out alive. 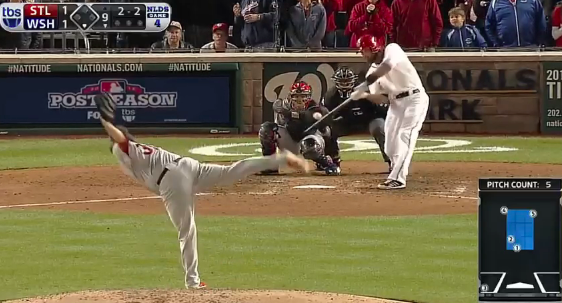 The worst pitch Lynn threw before the final pitch. This had the same velocity as the previous two pitches, but it didn't have the location. Werth was still a little late, fouling it off, but it was definitely a pitch he could have hammered. 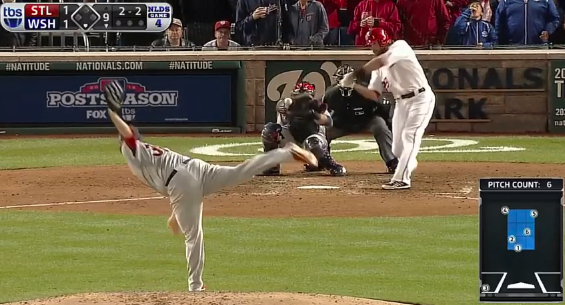 Lynn's back to normal here, getting the velocity and rediscovering his touch with the location. That's not a strike, but it's too close to take, so Werth lets off an emergency swing, just fouling it away. 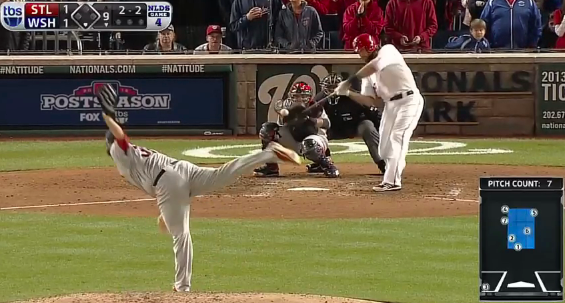 Almost the same pitch of the last one, and Werth popped it up. It landed just out of Allen Craig's reach: 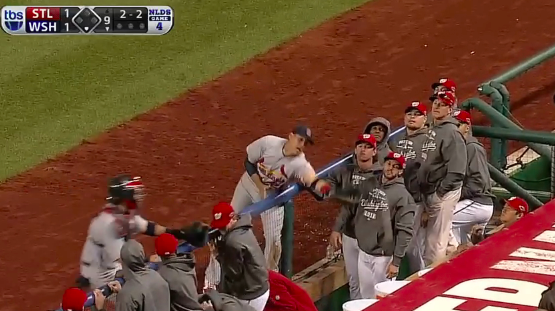 It's a little tricky to see, but the ball is a white blur, just beyond Craig's glove. You can see it in the sweatshirt of that Jonathan Sanchez-looking dude in the front of that Nationals herd. So whoever wins the World Series this year, remember that specific championship might not have happened if Nationals Park had their dugout railings a foot farther back.

Hey, look! A fastball down the middle! 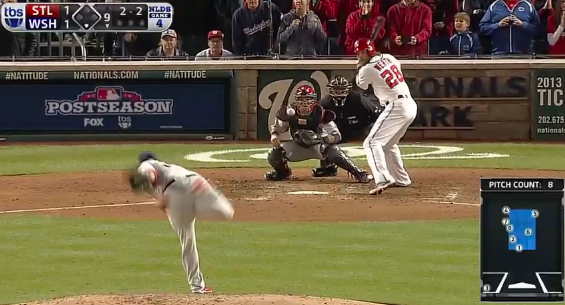 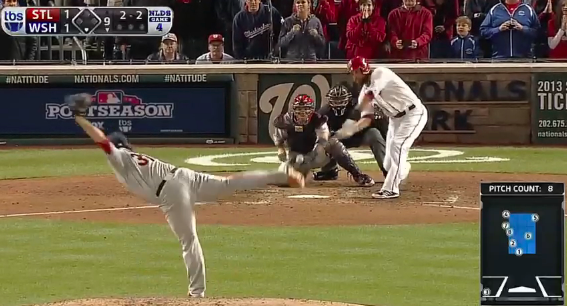 Lynn, again, threw a perfect pitch. It looked like it was in the strike zone at first. It was too good to take. It ended up below the strike zone on a 2-2 count. Werth was just able to foul it off. 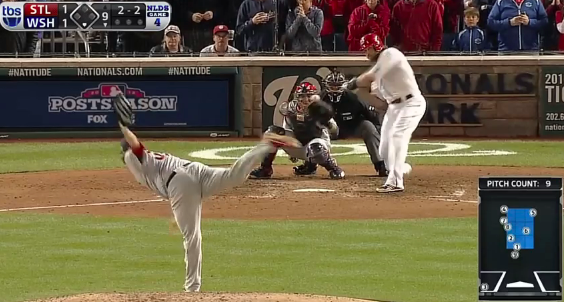 This one had a little late movement, so it looks worse in this still. It actually ended up in the top corner of the strike zone, similar to where pitch #5 was. 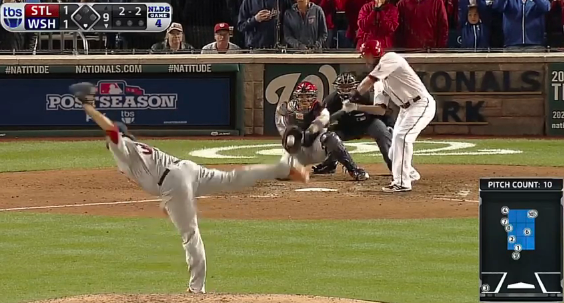 This one needs a GIF:

Is it possible to throw a better 2-2 curve? That's something of a koan, so you don't have to answer it. According to Brooks Baseball, the pitch was right on the edge of the strike zone. It was the borderline call to end all borderline calls. If Yadier Molina catches it, there's a chance it could have been called a strike. 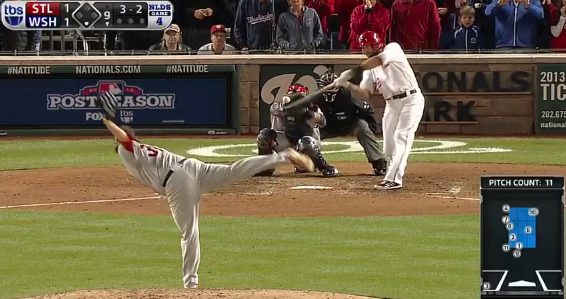 This is another perfect location, and again it comes following a tempting curveball on the bottom corner of the zone. If Werth doesn't swing, it might be a called strike. 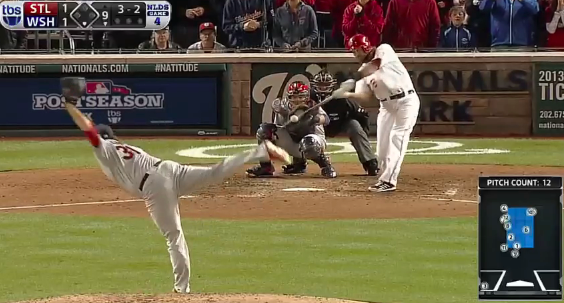 And, well, dang it all to heck, that was sure fun while it lasted.

If you're a Cardinals fan, and you know someone who cursed Lynn out, or who cursed Mike Matheny out for putting Lynn in the game instead of Jason Motte, send this to them. Because Lance Lynn threw some of the best pitches he possibly could; Yadier Molina called for them, and Lynn executed them perfectly. There was one waste pitch, 10 beautiful pitches, and two hittable pitches. Werth didn't miss the last hittable pitch.

But that's a credit to Werth, not a demerit for Lynn. In every 13-pitch at bat -- whether we're talking vintage Pedro or Justin Verlander -- there will be a pitch to hit. Most of the time, the hitter won't do anything with it. Werth did something with his, and it went a long way. There are still two games on Friday, and there will be anywhere from 12 to 21 games after that. But there isn't going to be a better showdown than Jayson Werth vs. Lance Lynn.