Timex Sports sent Ryan Hudson to Kona, Hawaii to experience the 2012 Ironman Championship first hand. What he discovered was the most difficult sporting event in the world.

Share All sharing options for: 2012 Ironman World Championship: The hardest day in sports

Mirinda Carfrae, a 5'3 Australian with a short crop of blond hair that gives her a slight resemblance to Tinkerbell -- if Tinkerbell were a 115-pound collection of sinewy muscle, bulging shoulders and quads -- crosses the finish line in third place.

She shuffles forward down the finishing ramp, looks around, and collapses.

"That's how you want to look," commented fellow professional triathlete Jackie Arendt. "You want to be the one collapsing."

Welcome to the Ironman World Championship, the single most difficult day in sports. 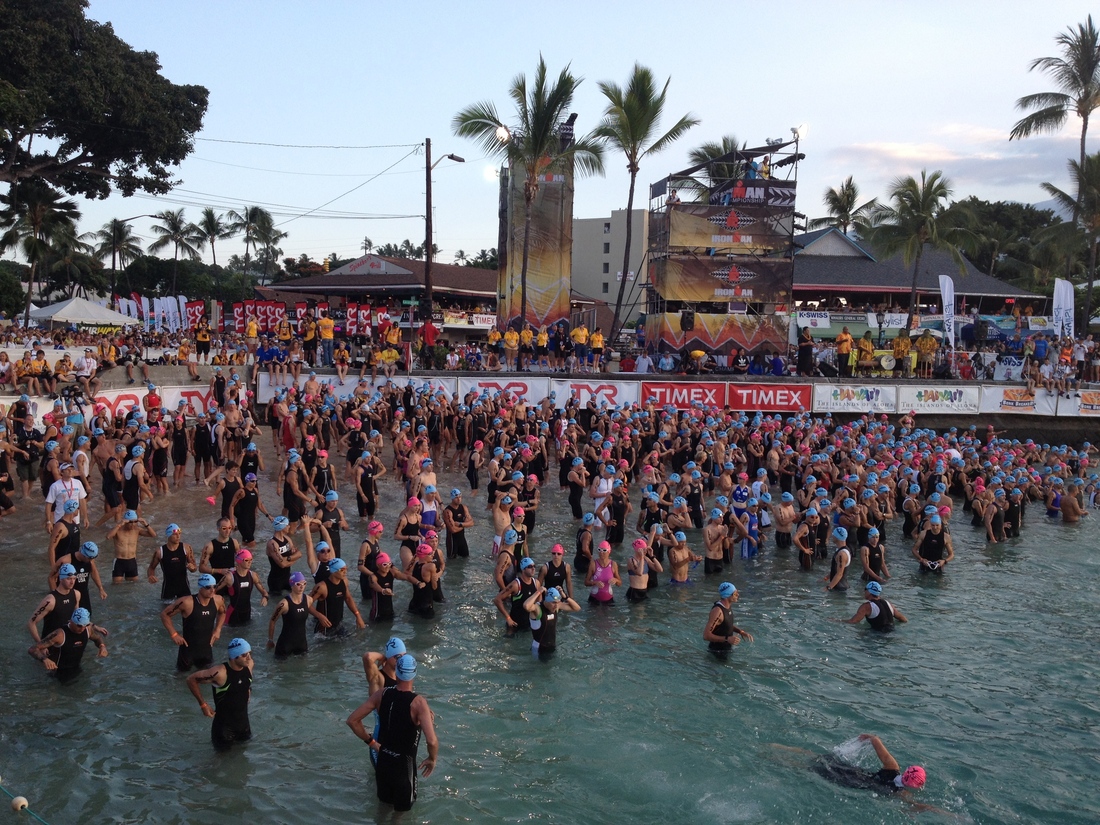 Like many events that border the fine line between physically challenging and completely insane, the Ironman came to be after military men got a hold of too much beer. While at a banquet, U.S. Navy Commander John Collins began debating with friends about which athlete was in the best shape -- swimmers, cyclists or runners. The argument continued until Collins finally suggested a race to settle it -- a combination of the 2.4-mile Waikiki Rough Water Swim, the Round the Island Bike Race (shortened from 115 to 112 miles for logistical reasons) and the Honolulu Marathon.

"So I got on stage and suggested that we put all three Oahu events together and I said the gun would go off and the clock keep running and who ever finished first, well, we'd call them the Ironman."

"It got a really good laugh at the time!"

When he first heard about the race, Dave Scott, who would later go on to become a legend in the sport, winning six titles, responded by saying, "That sounds like a pretty tough weekend." He laughed when they told him it was a single-day event.

For years, like many, I'd only seen the spectacle from afar, thanks to now famous and memorable clips from ABC's Wide World of Sports and NBC's tape-delayed program: Julie Moss collapsing in 1992, getting passed by Kathleen McCartney, and then crawling her way to the finish (the two are now friends and training partners, and both raced in 2012); "The Crawl" in 1997, when Sian Welch and Wendy Ingraham, in a fight for fourth place, both crossed the finish line on all fours after their bodies began literally shutting down and collapsing; the images of Chris Leigh getting so dehydrated that his body, just 50 meters short of the finish, finally said, "No more. We stop here."

But what makes it so hard? In a word: everything.

The swim turns a typically tranquil Kailua Bay in a literal sea of humanity. The bike takes you through lava fields and winds that can blow you over. And if the heat hasn't gotten you by that point, the oppressive humidity will surely drain your last bit of energy, and force you to question why you're putting yourself through this.

"It's such a hard race," said Timex Sports athlete Chris Thomas, who finished fourth in his category (85th overall). "I'll be out there, and I'll be like, 'There is no way I am doing this race again. I can't believe I actually paid money to do this.' 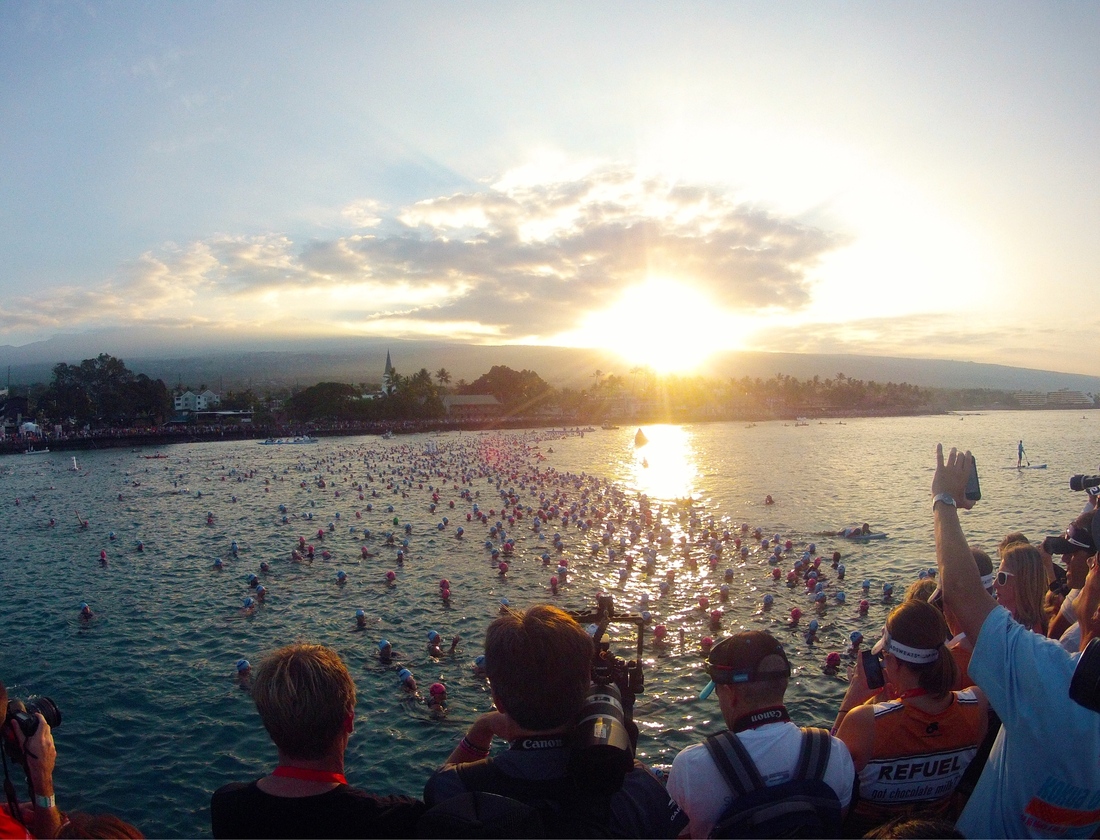 "I'm most anxious about the start of the swim, and not getting clobbered. Making sure my goggles stay on, and I don't get punched and kicked." -- Meghan Fillnow, first-year amateur at Kona

The cannon fires and what was once a group of nearly 2000, all nervously treading water, becomes a mess of splashing, sea foam and limbs. The Ironman World Championship has begun.

The day starts with a 2.4-mile open water swim. It's a mass start, which means you have people in front of you, behind you, to either side, and often, quite literally swimming on top of you. Hope you're not too claustrophobic. You will definitely bump into other swimmers. And you'll probably get hit, or clawed, or scraped. You just hope you don't get punched. And you really hope you make it through with your goggles still attached to your face. You have two hours and twenty minutes to complete the course (the pros will do it in a bit more than 50 minutes).

After you fight through the final swell near the sea wall that tries its best to push you back out from where you came -- it's as though even the ocean itself is conspiring against you to ensure this day is the most difficult imaginable -- you climb up the stairs and make your way into transition.

"Your body can endure so much more than you think it can." -- Kelly Fillnow, Timex Sports pro athlete

After a quick run through transition, where volunteers do everything from offer to water to apply sunscreen, athletes hop on their bikes to begin the 112-mile suffer fest. Maybe the only thing you need to know about the difficulty of the bike course is that the race does not allow athletes to use disc wheels on the back tires -- for their own safety. The crosswinds are so strong that they very literally can blow competitors off the road (and have before).

Athletes take a quick tour through town, bomb down Hot Corner and then make their way out toward Hawi, a ranching town some 50 miles away that's so tiny you get the impression it is sustained almost entirely by the Ironman week.

And there's a second thing you should probably know to help explain the insanity of biking 112 miles in Hawaii -- the heat. The route takes competitors though lava fields. For miles and miles, not only are you completely exposed to the sun, but on either side of the Queen K Highway is hardened black lava, radiating heat. The only respite are the collection of white rocks family and friends use to leave inspirational messages to athletes.

Wondering what it would be like to go for a bike ride in your oven? Wonder no more. 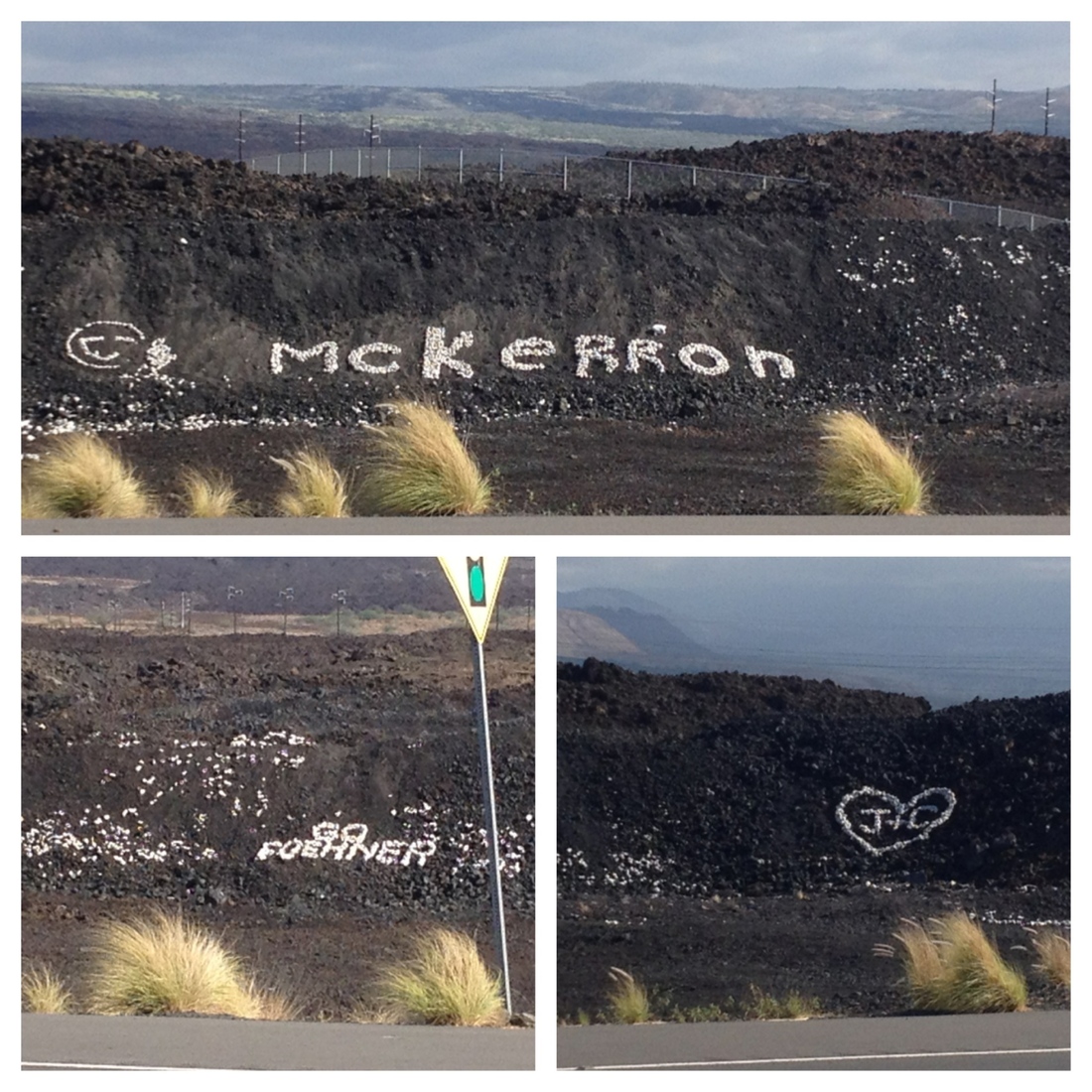 "You come off the bike, and you're so exhausted, and the last thing you want to think is, 'Oh my God, I have to do a marathon. Are you kidding me?'" -- Chris Thomas

After 2.4 miles of swimming in a washing machine, and biking 112 miles inside a furnace, you've finally reached the third and final leg of the Ironman -- a full marathon. All that separates you from the finish line is 26.2 miles, a run in near 90-degree heat with a stifling humidity.

"During this race, my legs will fatigue so much that I'll just count foot strikes," said Chris Thomas. "'OK, count the next 100 foot strikes.' Just to take my mind off the pain."

The marathon course takes you through downtown Kona before dumping you back onto the unforgiving Queen Ka'ahumanu Highway and its unrelenting heat. But the worse is yet to come. Just when you're feeling weakest. Just when you're nearing The Wall. Just when you're questioning why in the Hell you do this, the course turns for the Energy Lab.

Don't let the name "Energy Lab" fool you -- this sadistic section does anything but provide energy, and instead sucks it right out of you. The crowds disappear. The heat intensifies, smacking you in the face. Haven't been hydrating enough? Nutrition slightly off? These few miles will expose any mistakes or weakness, suffocating your will to push on.

"For some reason, it is unnaturally hot out there," says Jackie Arendt. "And you think, 'Holy crap, I can't wait to turn around,' but then you do. And realize it's all uphill."

So how do you cope? How do you not listen to your body as it cries out for mercy?

When Tim Hola was asked to explain what makes Ironman different from any other sport, he paused, and thought about it for a minute or two, seemingly drawing on the 13 times he had previously suffered through the lava fields, or battled the howling winds and Kona's extreme heat, before finally responding.

"Imagine something physically that you think is impossible ... And then do it."