Fumblr Week 4: A cat for every quarterback

Share All sharing options for: Fumblr Week 4: A cat for every quarterback

Just as the NFL surprises us every week (hello, 4-0 Cardinals), so too does the Internet endlessly co-opt news and media for new memes. Every week, a sure bet is upended by an underdog, and a new cat captures Reddit's attention and makes the social media rounds: Tumblr, then Twitter, then (six weeks later) Facebook.

The creation of a meme is a beautiful thing to see: a community of users who take a gem of an idea and polish it until every facet shines. Of course, that doesn't stop me from making a bunch every week for Fumblr. "Has anyone done cats and quarterbacks before? No? Okay, cats and quarterbacks it is." 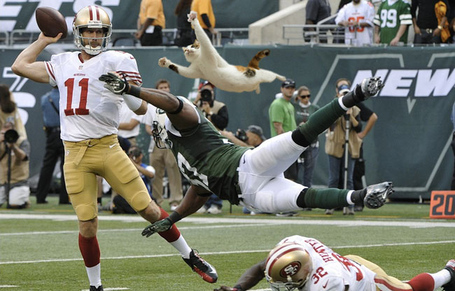 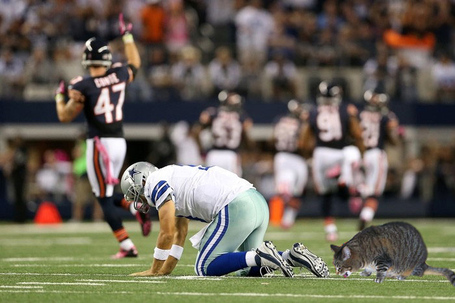 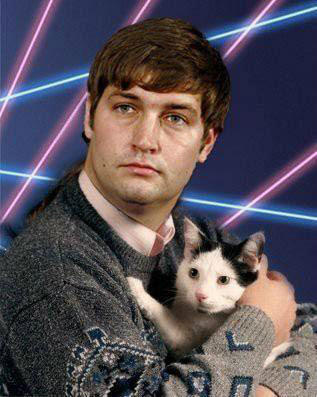 Whoa whoa whoa, SportsNation actually made a decent Photoshop? Tentative applause for whichever unpaid intern put this together. (Use some blur tool on that neck next time, though.)

While we're on the subject of Jay Cutler, this GIF from Monday Night Football beautifully captures his sullen dickishness. I love watching Bears games strictly for moments like that. After just a few minutes of watching Cutler, it's easy to see how he inspired memes like Jay Cutler Is A Cat and Smokin' Jay Cutler: whatever human complexity he may possess is hidden by his morose features and apathetic body language. He's a caricature of the asshole jock, a letter-jacketed goon from an '80s teen comedy who knocks a lunch tray from the protagonist's hands and is already exiting the frame as he delivers a witless put-down. He's perfect. I love him.

Sad Mark Sanchez could also live at another single-serving blog: 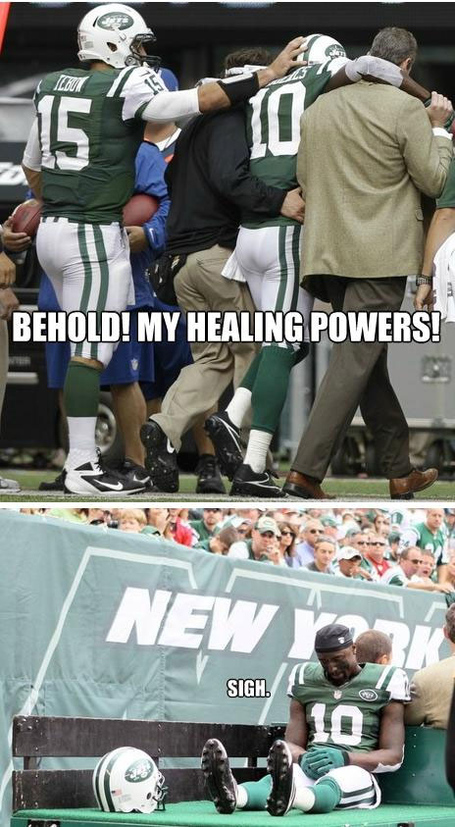 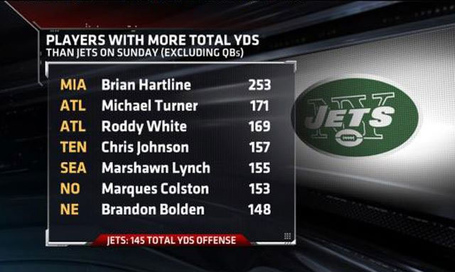 Perhaps if you already hate the Jets, you can enjoy the bloodbath of injuries and bad decisions that has sent the Jets' season into a tailspin (airplane term). But I don't hate the Jets, and so I feel only pity and sadness. A competent Jets team delivers two things that I appreciate as an NFL writer: a free-wheeling Rex Ryan, and Tim Tebow in a backup role. Even when they're good, the Jets are a Japanese game show of a team -- dangerous and embarrassing, but good for a laugh. Their current version of suck is a disservice to the consumer.

Cross out "Arkansas" and write in "Jets." 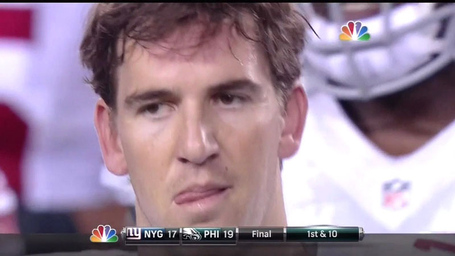 Given Archie Manning's unimpressive NFL career, fans' love of Manningface likely predates the Internet. It certainly predates Tumblr, which helps explain Manningface.com's imperfect format. It's not a new phenomenon, but that shouldn't preclude it from being documented and preserved and savored forever. Mmmmm, delicious disappointment, with some woody notes of pouting.

(For what it's worth, there IS a Manningface Tumblr, but its caretaker is less diligent than the meme deserves.)

Which NFL player could most easily make the move to pro wrestling? I say Jared Allen. 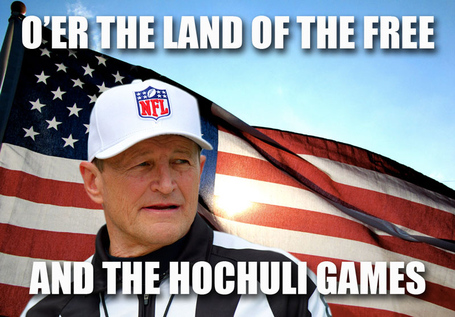 Like every NFL fan, I'm thrilled that the real referees are back at work. Even with Jeff Triplette's crew flirting with disaster in Green Bay on Sunday, it's a relief to know that these are professionals who can discern the difference between defensive pass interference and defensive holding. Yay, refs! Welcome back!

...but, uh, I don't actually care about you THAT much.

Still, cool to know that Ed Hochuli was a Miner.

Oh my! Colorful words in a violent sport played by angry men? I do declare! My delicate sensibilities! Billingsworth, carry me to the fainting couch!

No, despite Mark Sanchez's best efforts to get fired. Or would those be his worst efforts? What I'm trying to say is that he's awful.