Lolo Jones tweets at Eric LeGrand, 'Get Checked for a concussion'

Lolo Jones had herself a bit of a Twitter mishap Tuesday night, telling Eric LeGrand to "get checked for a concussion." Whoops. But really, that's the beginning.

Share All sharing options for: Lolo Jones tweets at Eric LeGrand, 'Get Checked for a concussion' 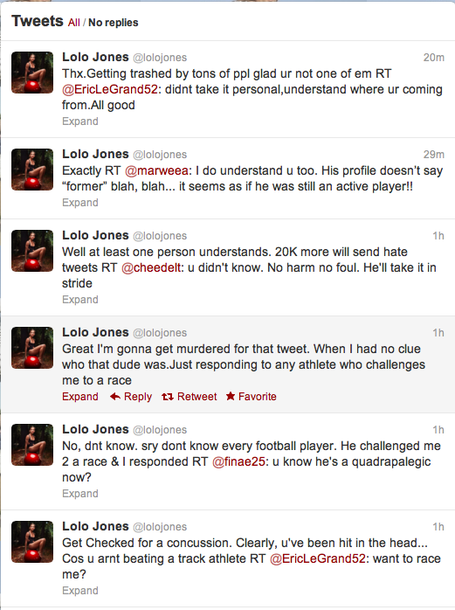 @ERicLeGrand52, for those who might not know (like Lolo), is Eric LeGrand is a former football player at Rutgers who was paralyzed during a kickoff against Army in October of 2010. Since then, LeGrand has had stood upright on his own, led the Scarlet Knights onto the field for a game in 2011, been given the Jimmy V Award for Perseverance at the ESPYs, vowed to walk again, and basically just been an all around inspirational story in every way imaginable.

But, as Jones says, it was a simple mistake -- she didn't know LeGrand, or anything about him, and she (competitively) responded. And to her (but more so his) credit, LeGrand has tweeted "sorry for all this crazy stuff being said. Much respect for you" and "this is wild did not know this was going to happen. You have a supporter in me for sure."

Jones, as she points out (and manages to make herself sound like the victim in all this), will "get murdered for that tweet" ... And she's probably right, I am sure people are lambasting her on Twitter right now. But why? Or rather, what's the point? I suppose some will want an apology -- please note, she never actually apologized. Jones only said sorry for not knowing every football player. Which, okay?

But apology or studying up on NFL rosters won't really change Lolo Jones, or who she is. Everything you need to know about her intentions are clearly on display in her original tweet that started it all. Ignoring the fact LeGrand is paralyzed and in a wheelchair, Lolo Jones' first response was to make a concussion joke about a football player. With everything we now know about how damaging head injuries can be, she still opted to make light of brain damage because HARF HARF FOOTBALL PLAYERS DUMB.

Edit: Lolo Jones, in a statement to Yahoo! Sports, apologized: "I'm truly sorry if I offended anyone by my tweet. When Eric challenged me to a race earlier all I knew was that he was a football player, but certainly had no idea he had become paralyzed from a football injury. I thought I was tweeting in good fun like I always do with the many athletes who challenge me to races."