Who is the mystery Marlins fan at the World Series?

Who is the guy in the bright orange Marlins jersey that has been sitting behind the plate during San Francisco Giants home games? Amy K. Nelson, in an exclusive from AT&T Park, met the superfan, and got some answers.

Share All sharing options for: Who is the mystery Marlins fan at the World Series?

SAN FRANCISCO - During Game 7 of the National League Championship Series, cameras spotted a strange fan sitting behind home plate in the Giants' home ballpark, wearing, of all things, a bright orange Marlins jersey. The internet was abuzz; how did this man score such prime seats, and why, on earth, would he actually wear a MARLINS jersey?

The Giants went on to win Game 7 to make it to the World Series, but the man remained a mystery.

Then, during Game 1 of the World Series against the Detroit Tigers on Wednesday night, the man was back again. Who was this guy, how did he score the same sweet seats again and why is he still wearing the SAME BRIGHT ORANGE MARLINS JERSEY?

So, naturally, I went to find him -- and more importantly, find answers to those questions.

In the middle of the fourth inning, I went behind home plate and talked with Laurence Leavy, who at first seemed shocked some stranger was creeping up beside him. But he agreed to exclusively give SB Nation his story.

But before, just in case security wouldn't let me through, I had made a note to pass to him: 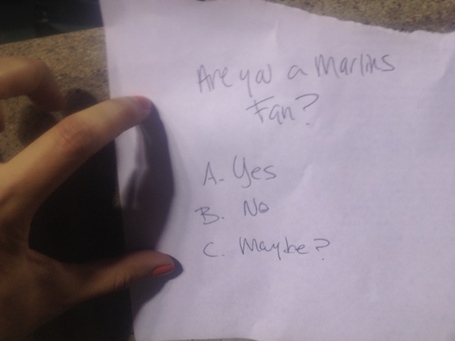 Luckily, I didn't need it, and Leavy, 52, couldn't have been nicer. Turns out he really is a Marlins fan.

"I'm a season ticket holder," he says. "I was in New York for the Yankees games [for the ALCS] I was all over. I just love baseball. I wear the same thing, everywhere I go."

Leavy got the tickets through StubHub, but then also adds that the Marlins helped him out. He owns a law firm that specializes in worker's compensation cases, and is a Miami resident. He has seats right behind home plate at the new Marlins ballpark, and said he's had season tickets since the organization's inception. 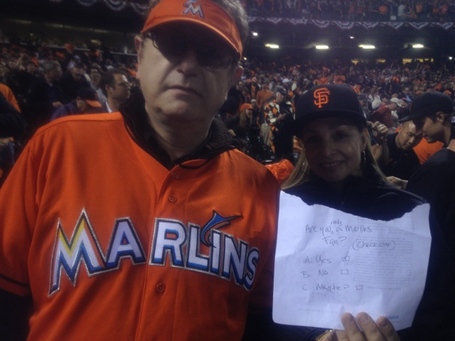 He's here with his friend Lisa DeCosta, a San Francisco local and a huge Giants fan who used to work for Leavy.

And Leavy says, amazingly, no one gives him a hard time about wearing the same Marlins jersey to every game. He says he's been to 26 Super Bowls and 80 World Series games, and he just loves sports.

"The best [photo of him] is the Heat game when everybody was in white and I was in orange," he says while flipping through his photo gallery. "It's hysterical you're gonna crack up."

And there he is, a lone orange shirt sitting in a sea of white. He says he went to the Marlins game earlier that night and, of course, wore the same jersey to the Heat game in the NBA Finals, not getting the memo that everyone was supposed to wear white.

Since they won, everyone told him to keep wearing it. And he did, and the Heat won the championship.

"All because of the doubleheader," he says, "it was totally by accident."

I had to ask him some burning Marlins questions, here's where Leavy stands:

And there you have it. Laurence Leavy is the man. He thinks Ozzie should have been fired, his favorite player is Stanton, he hates the home run structure, and he wants Bobby Valentine as the Marlins' new manager. Perfection.

Oh, wait, it gets better — Leavy has two Panda hats he wears, and said he put the white one on after Pablo Sandoval's first home run in Game 1. 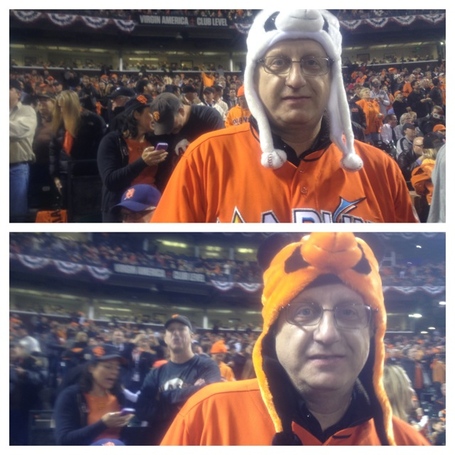