2012-13 NBA mascot preview: Rating the fake animals of the East

The Raptor is, of course, the greatest mascot in NBA history. Let's work our way through the rest of the Eastern Conference and sort the best from the worst.

Share All sharing options for: 2012-13 NBA mascot preview: Rating the fake animals of the East

Welcome to Part II of our 2012-13 NBA mascot preview. Monday, my pal Bill Hanstock reviewed every mascot of the Western Conference, and today I conclude with the Eastern Conference. 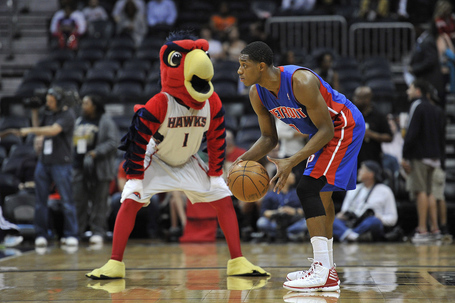 When I was 11 years old, I had a very No Fear-looking Atlanta Hawks T-shirt that read, "NEVER UNDERESTIMATE YOUR OPPONENT," which in retrospect is quite unusual, since there is very little in the way of team-branded gear that carries the message, "HEY THE OTHER TEAM IS PRETTY GOOD TOO." Upon seeing my shirt, my grandfather solemnly remarked, "You know, that's very good advice."

And it is, and I can only assume that Harry the Hawk is complicit in this pragmatic humility.

Weaknesses: I think I'm the only one who would appreciate pragmatic humility in a mascot. 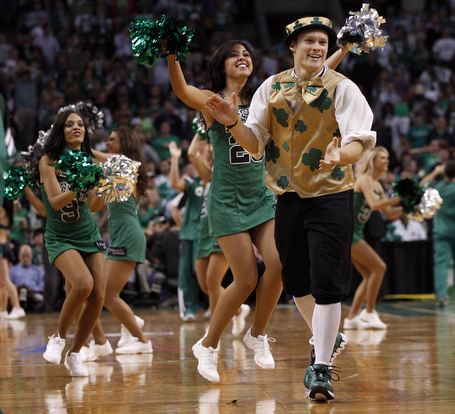 Strengths: One of only a handful of individuals in the Celtics organization who is younger than 45.

Weaknesses: He's just a human person, which is frankly sort of bullshit. Oh, and hey, you know what? The Celtics have a job posting, in case you're interested in becoming the next Lucky. Several essential skills are listed, such as, "proficient with Microsoft Excel, Word and Outlook." Which suggests to me that on any given night, Lucky is just some humiliated office intern they choose at random. 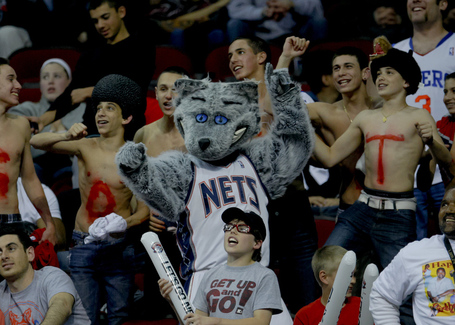 Type: Not a net, that's for damn sure.

Strengths: Clearly this mascot has nothing to do with basketball netting. In light of this, the Nets have actually created a second mascot.

Weaknesses: The second mascot is just another, smaller fox. 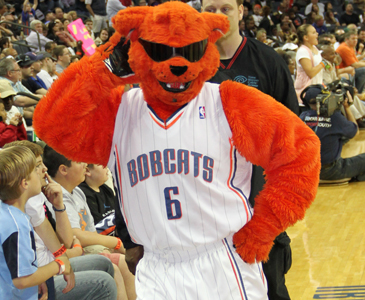 Strengths: Thanks to those Oakley-looking wrap-around glasses, he serves as delightfully sublime commentary. "What up, Charlotte? Remember the 1990s? I bet that if Charlotte had basketball in the 1990s it would have been just like this!" [goes 7-59]

Weaknesses: Secretly wishes he was back working his old gig: touring elementary-school cafeterias and espousing the importance of drinking orange juice, preferably whilst riding a skateboard. 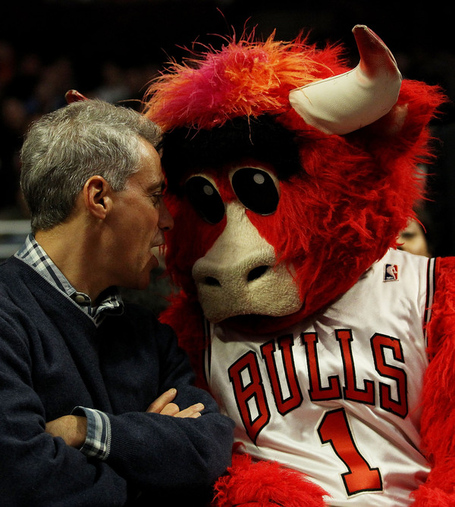 Strengths: Apparently he can type, because he clearly wrote his own Wikipedia entry.

He has become just as popular as some of the franchise's most notable figures, such as players Michael Jordan, Scottie Pippen and Dennis Rodman, and head coach Phil Jackson.

Weaknesses: The "Book Benny the Bull for your next event" page reeks of desperation.

Got a weird idea? Let's hear it. That's what we do.

"Want Benny to bang 'God Bless America' into a xylophone with a police-issue billy club while you roll around in horse blood and shriek the names of Confederate officers lost at sea? Sounds like a real hoot!" 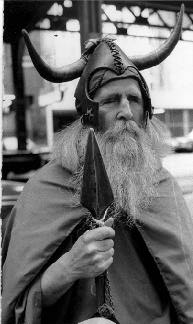 Strengths: You can read more about Moondog here, but here are the basics: in 1932, at age 16, he lost his sight in a farm accident and subsequently dedicated himself to musical pursuits. By the late 40s, he busked in New York City as a street musician while dressing as a Viking. He was an enormous influence on many 20th-century minimalist composers, and even invented a couple of his own instruments.

Weaknesses: Unfortunately, this is a different Moondog. The Cavaliers' Moondog is just a guy in a dog suit. 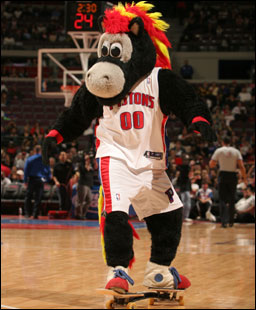 Strengths: I think I became aware of the Detroit Pistons' existence when i was five years old. I have spent the last 25 or so years, up until literally three minutes ago, without understanding the team's horse imagery. Pistons. Horsepower. Damn it.

Also, unlike some of the other knuckleheads on this list, Hooper has the good sense not to wear an actual player's jersey number. 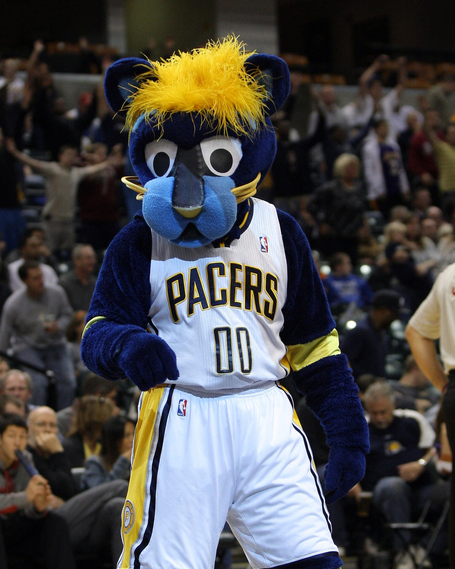 Type: Cat of some sort.

Strengths: Is no longer a shadow of his companion mascot, Bowser, who was retired a couple years ago. Bowser's bio notes that his favorite movie was Dog Day Afternoon, a tremendous film in which Al Pacino attempts to rob a bank in an effort to fund his lover's sex-reassignment surgery. This is the single most interesting fact about any mascot I've ever heard of. With Bowser phased out, Boomer seems far less vanilla in comparison. 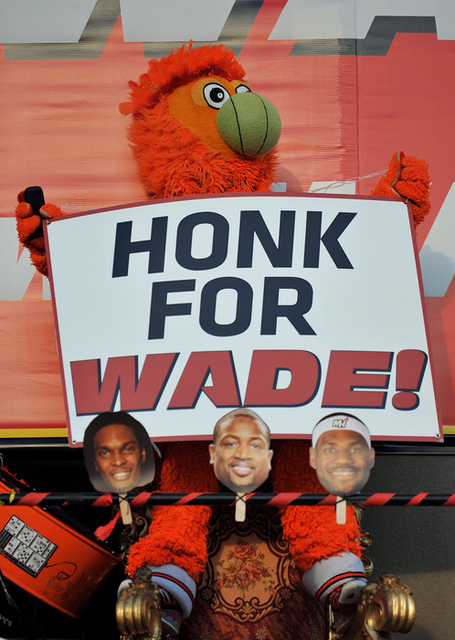 Strengths: Burnie, aesthetically speaking, is the most mailed-in mascot of all times, and he is not interested in making any apologies for this. His Neighborhood of Make-Believe-lookin' self appears as though it was conceived of decades before the Heat even existed.

That this mascot represents the NBA's premier franchise is wonderfully sublime commentary on how little the appearance or creativity of a mascot actually matters. Seriously, you could just send an intern to roll around in confetti and packing tape and call him "MR. CRAZY GUY MAN" and tell him his favorite song is "Wild Thing" and boom, mascot.

Weaknesses: In 1994, Burnie grabbed a random woman on the crowd by her feet and tried to force her to dance with him. The humiliated woman fell while trying to get away from him. This is an unbelievably shitty thing to do, and it's also something that mascots tend to get away with to some degree or another.

Not this time. Said woman was the wife of a federal judge, and the jackwilly in the suit was originally threatened with 20 years in prison. 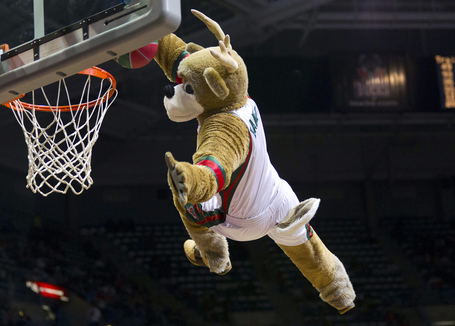 Strengths: Can do this.

Weaknesses: It would be better if he were a deer, as per the Bucks' theme. Instead he is just a frog though. 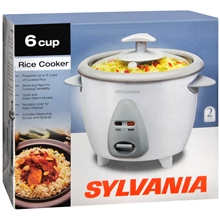 Strengths: Does one thing, and one thing well, and one thing that was beyond the abilities of the Warriors' previous mascot, Thunder, who was axed once Oklahoma's franchise stole the name: cook rice. This sucker comes complete with an auto-shutoff switch, steaming tray, and measuring cup. The Sylvania can also cook quinoa, couscous, and many other sorts of grains!

Weaknesses: Tends to break after a year. Still, perhaps the best $10 you could spend for your kitchen. 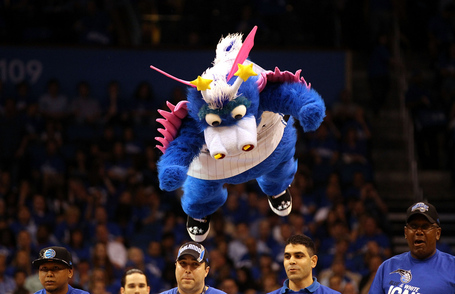 This, according to Stuff's official page, is where he lives. 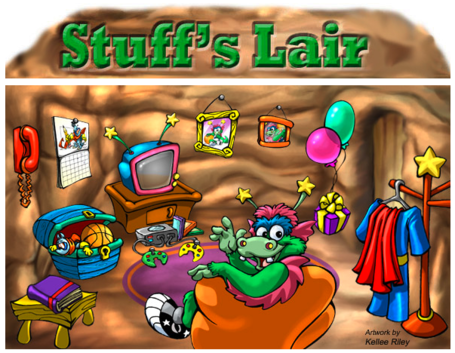 Mascot: None. The Sixers' most recent mascot was a sunglasses-wearing rabbit named Hip-Hop. Almost a year ago, the team commissioned Jim Henson' Creature Shop to develop a new one. So the shop came up with three possibilities, none of which were really any good, and put them to a vote. There's been no news on this front since.

Strengths: Does not exist.

Strengths: If you've been around these parts for a while, you may remember the Raptor's dominance in our Animated GIF Tournaments. His GIF has been crowned the undisputed best sports GIF in the history of the Internet.

He was quite proud: 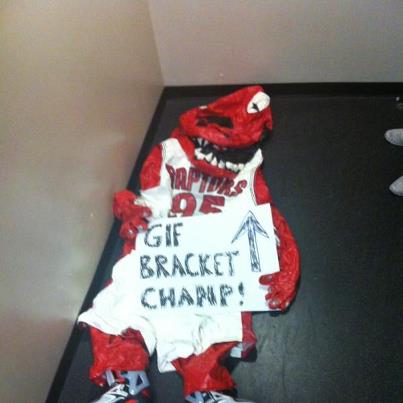 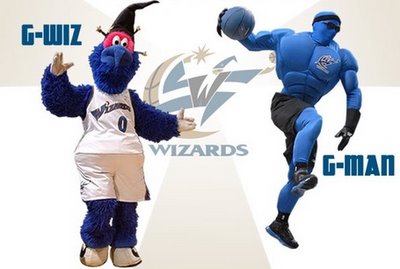 Strengths: These two perfectly illustrate the contemporary state of mascot-ing. G-Wiz is fuzzy and funny-looking and absolutely no different from 95 percent of other mascots. G-Man is "Poochie" from Itchy & Scratchy: the franchise's attempt at a hip, cutting-edge avatar.

Weaknesses: And they inadvertently, but poignantly, illustrate this point: it doesn't really matter what a mascot is or looks like, it's about what the mascot actually does. Does it tumble down a flight of steps on rollerblades? Does it backflip-dunk off the top rung of a painter's ladder? Show me someone who can do these things while wearing an upside-down sleeping bag, and I will show you a terrific mascot.