The Phoenix Suns are finally without Steve Nash, and it's pretty evident that no one in the franchise knows what happens next. Except losing. Everyone knows that losing comes next.

Share All sharing options for: Suns preview: Finding an identity after Steve Nash

Everyone has pegged the Orlando Magic as a contender for the worst record in basketball because the team lost its overwhelmingly best player and got limited talent in return. The Phoenix Suns lost their best player by a country mile in Steve Nash and ... got a couple of picks for it.

So why aren't we talking about the Suns as the champion of Ls? Should we be?

Phoenix's strength last season -- and throughout Nash's tenure -- was offense. The Suns ranked No. 9 in offensive efficiency in 2011-12, including No. 9 in shooting and No. 10 in turnover rate. The other two major offensive categories -- offensive rebounding and free throw rate -- were mediocre. There is very obvious reason to believe that minus Nash, the team's shooting numbers will fall off of a cliff. Not only was Nash the team's most efficient scorer (by no small margin over Marcin Gortat), but studies have shown that he has long been the best in the league at making teammates more efficient.

In particular, Gortat seems to have benefited greatly from Nash. The Polish Hammer was Phoenix's top scorer in '11-12, averaging 15 points per game on .578 True Shooting, which are good numbers for a center primarily known for his defense. But in Gortat's 1-1/2 seasons in Phoenix, almost 80 percent of his field goals have been assisted. Needless to say, while Goran Dragic (Nash's replacement) is a swell guy, he's not remotely the passer that Nash is. So everything will necessarily get more difficult on offense for Gortat, and that's going to hurt the Suns' bottom line.

So the most efficient scorer is gone. The top scorer has lost his top set-up man and will likely either become less efficient or less prolific. Who does Phoenix have to fill the void? 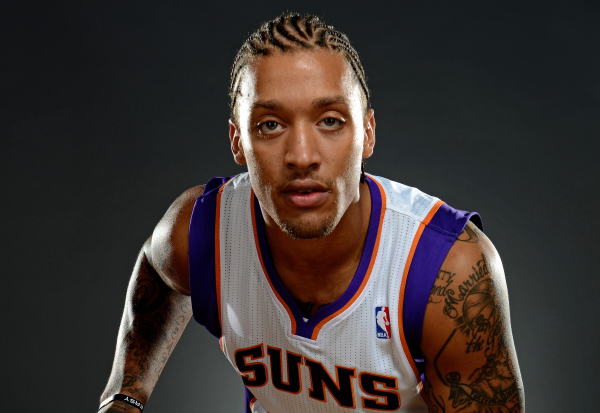 Well hello, Mr. Beasley! Glad you could join us.

In theory, the offense could again be a strength for Phoenix. Alvin Gentry quite obviously knows how to run an offense. Dragic is pretty good. He's nothing close to an All-Star, or Nash, but he is above average. A top-12 point guard, if you will. Gortat is a pick-and-roll lothario. Luis Scola can still get things done, and Kendall Marshall is promising. Jared Dudley is still like the weirdest good player in the league. But twist it this way: this team finished .500 and out of the playoffs with Nash last season. Excepting anything close to that, given the roster changes, is foolish.

There is reason to believe that the Suns' major '11-12 weakness -- defense -- could improve on account of Nash's exit. But Dragic is not known as a plus defensive point guard, and Grant Hill -- who covered a lot of tail for the last few years -- is gone. Scola will play lots of minutes (especially since Channing Frye will unfortunately miss the season with a heart issue), and he's not exactly a stopper. Gortat, Dudley and (if he gets minutes) Wes Johnson are the defensive-minded players here. That's ... it. Gentry has struggled to get much defense out of his teams for a while now. The marginal improvement at point guard and possibly up front (through the absence of Frye) isn't going to turn the tide.

There's also the fact that bad teams tend to be particularly susceptible to falling apart on defense. Defense is largely effort and focus, in addition to agility and strength and smarts and all of that. When you're 14-30, that focus is going to drift, and it's going to take effort with it.

The Suns also happened to be a really bad rebounding team in '11-12: No. 23 on offense (creating few second chances) and No. 24 on defense (giving up many second chances). That's a terrible combination, and again we're left searching for something this team might actually do well.

Lose. They will lose well.

The headline "Michael Beasley is the New Grant Hill" appears in a publication not named Bleacher Report, Slate or The Onion.

Channing Frye fails to create level-80 World of Warcraft heroes for each of his teammates. (Luis Scola has dibs on the Tauren shaman.)

Luis Scola is not on the trading block by mid-January.

The Gorilla isn't Phoenix's No. 3 scorer.

Anyone utters the phrase, "But they have Luke Zeller!" and actually gets nods of agreement.