Persistence is futile: QWOP, the funniest sports game of all time

Share All sharing options for: Persistence is futile: QWOP, the funniest sports game of all time

QWOP is the funniest fucking game I've ever played. I think it's just the matter-of-factness by which the game engages the player in complete absurdity. You're a track athlete competing against nobody in a stadium full of people. Mm? No, of course you don't know how to run or use your legs. What a stupid assumption to make. Are you stupid? Anyway, you ran 2.3 meters. Here is a medal. You have won first and last place.

You can play QWOP right here, if you'd like. If you're much like me, you'll spent 45 seconds mashing the Q, W, O and P keys -- which control Mr. QWOP's calves and thighs -- before writing off the game as the poor man's Kobayashi Maru, an exercise that is impossible to win.

No, really. Try it. Your first attempt will look like this.

So will your 20th attempt.

That is the goddamned stupidest thing I've ever seen. Mostly because I couldn't figure out how to be good at it.

I asked people to play QWOP for five whole minutes -- an eternity, because I am demanding -- then complete a short survey detailing how far they were able to run and how they enjoyed the game. In all, 251 of you responded.

Simple Flash games are simple and easy to pick up. That's sort of the point. But only 71 of you -- that's 28 percent -- reported that you got any better at QWOP within the five minutes you played it.

"I'm not sure how I arrived at this philosophy," says Bennett Foddy, the game's creator, "but I don't feel any sympathy for people who find a video game hard. At all. It never occurred to me to try to modify QWOP so that it was easier to play."

Well, that certainly isn't surprising. Nothing about QWOP implies that its creator gives a shit about how difficult I find the game. In real life you don't have to think about running, you just run. This game makes me feel like I'm writing and mailing letters to every muscle in my legs, telling them to stop and start. Holy Hell it's awful.

Made me want to cry

What is the point, exactly?

i used to think i could do things

Foddy, who designed the game in 2008, drew inspiration from several sources, including the NES classic Track & Field. "I loved the nature of the multiplayer in those games, where you perform in front of your friends while they wait their turn, and often embarrass yourself terribly."

Indeed. The first time I played QWOP, my friends and I spent 20 minutes passing around an iPhone and trying to reckon how the Hell to play it. I died laughing. Tears in my eyes, doubled-over laughing. We all were. Like, here's this well-polished, well-made game. Visuals look good, the controls do what they say they do, et cetera.

At the outset, it looks like one should be able to pick this up and run 100 meters right away. 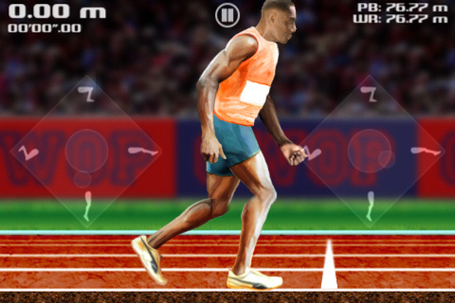 QWOP for iPhone, before the player touches any controls.

And you can't, and you're an idiot. It all goes to Hell. That, I guess, is the root of QWOP's humor.

why is he a runner if his legs don't work

QWOP reminds me that it's a miracle that we can do any sports things at all. Let's start small: we can pick up a football for the first time in months and throw a spiral without really thinking about how we're gripping it. Like, Average Folk like you and me can do that. It feels like such a feat of engineering should be difficult.

And then I start thinking about what the best among us can do: how Stephen Strasburg can chuck a 97-mph two-seam fastball that completely bottoms out, and Marshawn Lynch can sprint in a suit of armor while essentially fighting people, and Ricky Rubio can put perfect English on a bounce pass while looking the other direction. It's just such a non sequitur. Every other human accomplishment -- society, technology, art -- is the result of conscious experimentation and planning and study, and a whole lot of it.

I don't feel any of that when I throw a football. I just throw it. Can it rightly be called a miracle if millions of people can do it? I don't know, but without it, I am QWOP.

Whomever invented this game is a mean-spirited doodiehead, and is also a genius. It is a testament to the foolhardiness of the human competitive spirit that this game is so often played. I could use a cigarette.

Foddy, despite having created the game, says he's "just mediocre" at QWOP. I'm horrible at it; after having the game on my phone for a year, I haven't made it past the 20-meter mark. There has to be a secret, right? There has to be a right way of moving QWOP's legs and galloping into a full sprint. I have to be overlooking it or over-thinking it. It can't be hard. I had to ask.

"I guess if you were to approach me in the street and ask me how to play QWOP," he said, "I'd tell you to take a more experimental attitude in your life, and not to rely so much on the hard work of others."