Dan McQuade of Philly Mag brought to our attention that Rob Ryan's play card appeared to have a very strange product placement on it during Sunday's game between the Dallas Cowboys and Philadelphia Eagles.

So we did a little investigation of the footage, and SURE ENOUGH: 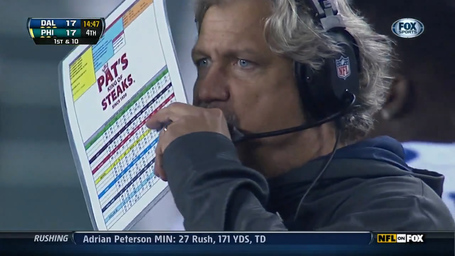 And in moving form!

Help us out, guys! Is he saying "small fries" at the end there? Probably. How else is he going to get a small fries?

The jury is out as to whether this is an actual paid-for advertisement or if PAT'S KING OF STEAKS is just an appropriately-named defensive play that Ryan came up with. Some other plays that Rob Ryan has devised for the Cowboys defense: