Bikinis: Reviewing the menu of every sports bar ever

Bikinis Sports Bar & Grill is exactly what it sounds like. Let's take a look through the menu, and visit the intersection of ground beef and softcore erotica.

Share All sharing options for: Bikinis: Reviewing the menu of every sports bar ever

Many strange things have settled in as fixtures of American life. One of those strange things is the Sports Bar With Pretty Ladies. You know, the sort of hyper-vanilla establishment in which they could hang a pennant that reads "GO COLLEGE STATE" on the wall and nobody would notice or understand why it was funny.

This sort of establishment, in what I'm tempted to perceive as a gasping, flailing effort to escape its profound vanilla-dom, insists upon hiring traditionally attractive, suggestively-dressed women as servers, and then threatening to fire them if they are selfish enough to weigh 132 pounds. This perfectly well-adjusted and not-misanthropic behavior might not be common in all such establishments, but one defining qualifier of Sports Bar With Pretty Ladies is that you will not be hired if you don't conform to the definition of "pretty" that is roughly congruent with that of the "Find Single Christians NOW" Facebook ads. This element is rather mean and creepy, which suggests by definition that it is, at the least, not boring.

Bikinis Sports Bar & Grill, a restaurant chain with a handful of locations across Texas, is not terribly unlike hundreds of other Sports Bars With Pretty Ladies across the country, but it's the one @norunsupport alerted me to over the weekend, so that's the one we're going to make fun of today. Let's open the menu. 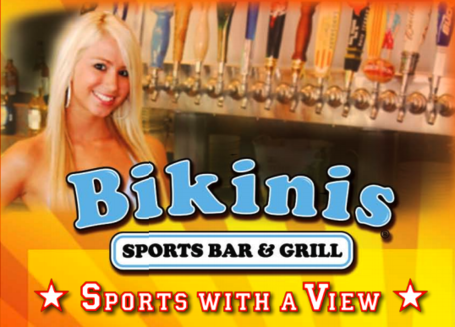 SPORTS WITH A VIEW. I just got home from the Cowboys game, which I enjoyed while wearing an iron pail over my head. I occasionally banged it with a xylophone mallet when the mood struck, which was somewhat rewarding in its own right, but I very much look forward to patronizing an establishment in which I can look around and see objects. Thank you for your time and God bless your wonderful slogan! 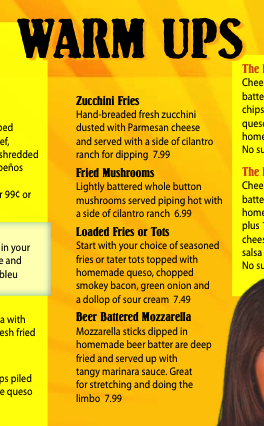 When you open the Sports Bars With Pretty Ladies menu template that ships with Adobe Illustrator (ennui.ait), "Warmups" is the filler headline over the appetizers section. The creator of this menu, who I suppose I'll refer to as Jimmy from here forth, changed it to "Warm Ups" in a fit of Kubrickian perfectionism.

Please note the beer battered mozzarella, which is "great for stretching and doing the limbo." Jimmy has this problem, you see; he loses focus. Here, he just sort of drifted into a Craigslist ad for a rusted-out metal pole he found on the shoulder of I-20 and is trying to sell on the cheap. Come on, Jimmy! Eye on the ball, fella! 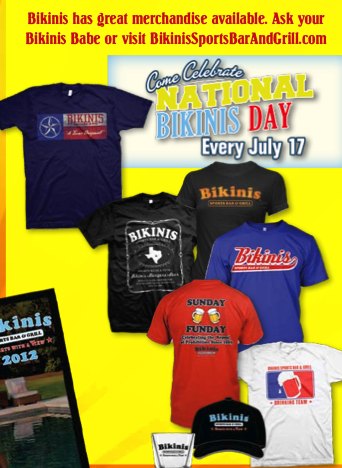 The target demographic for this merchandise is, "guy selling sports cards from his chipboard folding table in the mall." I don't know why they offer all these different shirts, because this is not the sort of individual who owns multiple shirts. He is in the market for a new one, though, because his "FBI: FEDERAL BREAST INSPECTOR" shirt has half a Four Loko spilled all over it, which would at least be manageable if it didn't attract bees.

I stared at this and stared and stared and was certain that "B.A.F." had to be some sort of suggestive acronym. It is not! It is just a three-letter acronym for a six-letter phrase!

Overtime = desserts. Sidelines = side items. It's like staring into the face of God.

"Add a side for a more inspired meal!" AAAGH this is so goddang earnest I could just melt into a puddle. Why is there not clip art of a guy with a beret, paintbrush and palette kissing his fingertips? If a job's worth doing, Jimmy, it's worth doing right. 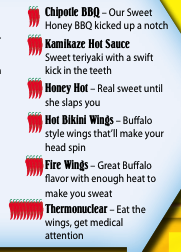 hey y'all wanna order some waings THROW THE GODDANG BALL ROMO think i might get th' honey hot waings on account o' the sauce is an abusive woman ROMO CHECKDAAYWN ROMO! CHECKDAYYWN might could mix 'n match with some'a this kamikaze hot sauce on account o' the implication o'bod'ly harm CATCH THE GODDANG BALL DEZ MIGHT CATCH IT IF YA AIN'T WEARIN ALL THAT JEWELRY awww hell look y'all these waings, lemme read it, says tharmonuclear waings! says, lookit this, lookit, says get medical attention, that's how hot it is, y'COMEOWWWWN GARRETT Y'DON'T PUNT ON FOURTH AND SIX NOT WHEN YA GOT JASON WITTEN USE YOUR ARSENAL YOU'RE AT WAR GOTTA HAVE WAR MENTALITY let's ask ansee maybe they might could let us mix 'n match, every other waings place lets y'mix an' match except for the hooters at the airport COMOWWWWN DEFENSE Y'GOTTA FILL THE BOX AGAINST BRADY QUINN HE WAS A HEISMAN FINALIST yes scuse me ma'am could uh, lemme look could uh, could y'all could might let us mix 'n match waings, get some o' the honey waings and some o' the tharmonuclear waings on th'same platter? ok! ok! pearfect! if y'all could might just make sure y'all put 'em on different platters so we know which waingsGODDANGIT QUINNS GONNA SCRAMBLE FOUR YARDS EVERY TIME! JASON GARRETT HAS LOWST THE FAN BASE

"Bring a bib and share it with your date."

HI I AM JON. YOU ARE LADY. WOULD LIKE TO GO TO RESTAURANT?!??!?!!?!?! WE EAT 5 LB BEEF. YOU EAT 2.5 LB OF BEEF. I EAT 2.5 LB OF BEEF. STARE AT TELEVISION WHILST EAT BEEF. SHAKE HANDS. MARRIAGE. GROW OLD TOGETHER. BUY HOUSE BY LAKE. STOCK LAKE WITH BEEF. HAVE CHILDS, TAKE CHILDS FISHING, CATCH BEEF. CHILDS ALL NAMED "BIB." /sneezes stray crumbles of ground beef out of nostrils

Man, Jimmy was really at the top of this game when he wrote this bit. Prose like that doesn't come on the first try. He nearly went with:

OK. The folks at Bikinis certainly didn't ask to be bagged on like this, but as a child and longtime resident of Real America, I have been dragged to restaurants like this more times than I would like, and I don't particularly feel bad about it. I don't know whether we're all collectively responsible for the existence of establishments where the ladies are objectified, or if it's just one guy from Plano who thought it would be really neat to fill a building with three dozen men with tater tots and unrequited boners; if the latter, it would certainly be easier to assign responsibility.