For one night, Roy Hibbert was himself again

The Indiana Pacers' star was mired in a shocking slump to start the season, but after a 20-point, 12-rebound performance against the Washington Wizards, he can breathe easy ... for now.

Share All sharing options for: For one night, Roy Hibbert was himself again

WASHINGTON -- Roy Hibbert's cell phone rang at 11:30 on Sunday night, nine hours after the Indiana Pacers' center continued his awful start to the 2012-13 season with a six-point, six-turnover effort in a blowout loss to the New York Knicks. Surprised, Hibbert picked up the phone and saw a familiar man's number: Frank Vogel's.

The Pacers' coach was simply calling to let his center know that he was still behind him. In return, Hibbert made Vogel a promise: he would score 20 points and grab 10 rebounds against the Washington Wizards the next night.

Hibbert's 20 points and 12 rebounds, along with David West's 30 points, helped the Pacers stave off a desperate run from the winless Wizards to get a 96-89 win at the Verizon Center. It wasn't pretty, and it very nearly was disastrous for a Pacers team that badly needed a win as well.

But it was also just what the doctor ordered for Hibbert, who had been struggling so badly since signing a four-year, $58 million contract extension last summer. Prior to this game, Hibbert was averaging just 8.5 points per game on 37-percent shooting. He had only scored in double figures four times and had yet to notch more than 14 points in a game. The Pacers needed him to raise his game with the absence of Danny Granger, and Hibbert had fallen flat. He was still a presence defensively, of course, but for a maximum-contract player, that wasn't nearly enough.

Certainly, one good game against the awful Wizards isn't going to fix the problem all by itself, but it's most definitely a start.

"It's huge. We need him. He knows we need him, and we believe in him," Vogel said. "We say it every game, but it's just a matter of time. He'll come around."

Vogel has insisted that nothing was seriously wrong with his center. Shots he hit last year were spinning out. Looks he was getting last season weren't coming as easily as this year. The numbers certainly bear this out. Through 11 games, Hibbert had attempted more shots (4.5) at the rim per game than he did last season, according to Hoopdata. His percentage on attempts from 3-9 feet, his patented hook shot range, was all the way down at 27.6 percent after being at 51.1 percent last year.

The only way those numbers continue to look that bad is if Hibbert starts to lose all confidence in his game. That's why Vogel kept up his relentless positivity. Otherwise, Hibbert might be buried for good.

"We're going to continue to build him up," West said. "You can't just tear guys down because the year's so long."

"He's the most positive coach I've ever had," Hibbert said of Vogel.

If there was a tactical adjustment to be made, it was with where Hibbert was catching the ball. Defenders have been pushing Hibbert out far off the block, making it difficult for him to get to his sweet spot in the middle of the lane. Many of Hibbert's post-ups this year have begun like this. 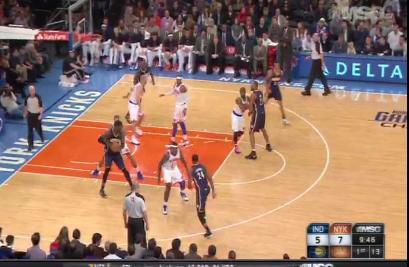 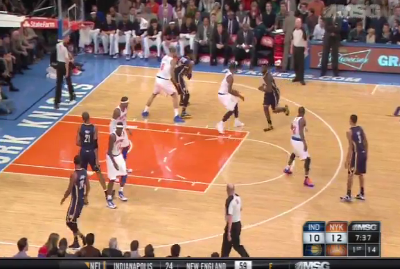 But on Monday, Hibbert did more to get better post position, and the result was easier shots in the lane. Look at how deep he was on these two screenshots. 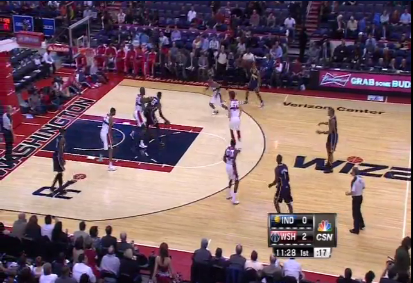 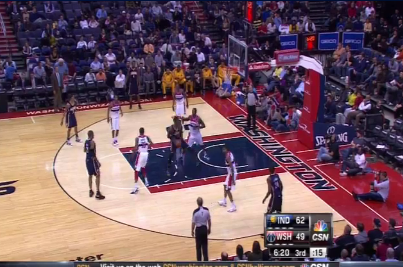 The difference was something West noticed after the game.

"I thought he was a lot more active before he got the ball, doing things to get himself in good position where he can just catch and get himself a good shot at the rim," West said.

Whatever change took place, it was much needed. Hibbert knows that one game doesn't buck a trend, telling a reporter that he should only ask him if he got the monkey off his back "once I string a couple of these together." But his one-liners -- he joked that he should use his new contract to pay for his parents, sitting courtside in his return home to the D.C. area, to accompany him on every road trip -- and his relaxed posture told a very different tale.

There come times in the season where a big game, even against a woeful team like the Wizards, can do so much for a player's confidence. Clearly, this one game did it for Roy Hibbert.