Montreal, where sports are now dead

Last weekend, Montreal played host to a dramatic UFC fight and a CFL conference championship. Normally, attention would turn to the Habs. This is what it looks like when sports leave a city entirely.

Share All sharing options for: Montreal, where sports are now dead

There is no hockey in Montreal. For 24 hours or so last weekend, it didn't seem to matter so much. Saturday night, the thoroughly likable Georges St-Pierre defended his UFC welterweight title at the Bell Centre, and it must be understood: St-Pierre, a native Quebecer, has achieved sainthood in this city. Local sports heroes abound on this continent, but in the eighteen months since St-Pierre last fought, most of these heroes have competed for 50 to 250 to 500 hours. This man, and these people, had 30 minutes.

A few blocks away, I watched the fight in a bar. I was emotionally invested, but was also the least emotionally-invested person present, and so I was free to break away from the screen and watch the faces in the room. In the third round, Carlos Condit wrecked St-Pierre's momentum with a head kick that sent him to the mat. Silence, aside from a few hushed utterances that were probably French if they were any tongue at all. I think, for a moment, that I saw St-Pierre's eyes flutter and roll as he struggled to guard. Some watched with their mouths covered, others buried their faces in their hands entirely.

St-Pierre endured, found his feet, and won by unanimous decision. Some of those around me hugged and cheered; others simply sat, relieved. The fellow sitting across the table was blunt: "I was worried. I was ... very, very worried." And that was that, for this fighter and these folks, for what is sure to be a year or so.

That was beautiful, but it was not strange. The next day was profoundly strange for an American football fan: Julie and I took the Metro to Olympic Stadium, where the Montreal Alouettes hosted the Toronto Argonauts for the CFL's analogue to the AFC Championship Game. Like St-Pierre, the Alouettes, winners of two of the last three Grey Cups, entered as consensus favorites.

Stade olympique does not, and could not possibly, exist in the United States. 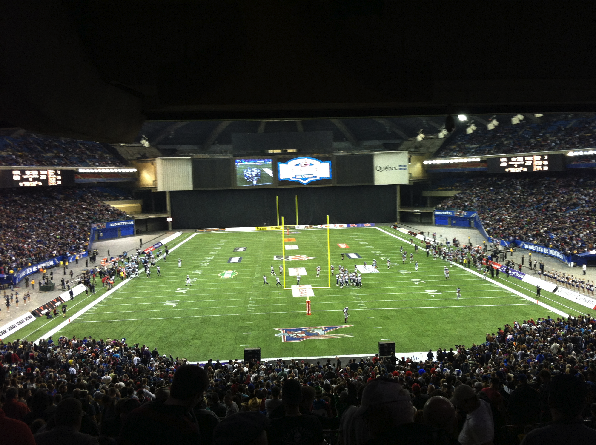 From a distance it's terribly impressive; the giant fin-like apparatus that hangs above helps it to resemble a docked extraterrestrial cruiser in a way other domes do not. Inside, it is 1988. The yellow metal seats clack up and down without resistance, and regulars are fond of standing half-upright and using them as noisemakers.

It feels like an enormous unfinished basement. The frame is concrete-upon-concrete, and the light structures are checkered with lamps dimmer and more yellowed than others. The simple, monochrome scoreboards are surely decades old, and sport the occasional dead lamps -- when they displayed, "SHHHH ..." during Montreal's offensive drives, it resembled, "SHGHH ...," and this idiot American initially reasoned that this was simply how Francophones said it. Where the Expos' center-field wall used to stand, there is now a giant black curtain. It looks just like a batter's eye. As I look at that photo now, I receive this image of the stadium waiting, as long as it takes, for Tim Raines to step into the box.

The score of the game wriggled into the oddest contortions -- 10-3, 10-4, 10-6 -- before neatly collapsing into a 27-20 final that at last felt familiar to me. And so did the end. Lord God, so did the end. Forty-year-old quarterback Anthony Calvillo, who has played for Montreal since before the turn of the century, needed a touchdown in the final minute. On the third and final down, he spotted receiver Brian Bratton deep in this cavernous end zone.

The ball knocked off Bratton's hands with an almost cruel flourish, high enough for everyone to see, no matter the line-of-sight. "AAAAUUUUGH," said 51,000 people, exactly once, and then it was dead.

As I walked with Julie back to the Metro, she said, "that was it. There are no sports. Those were all the sports."

She had little interest in speculating when the NHL lockout, a miserable, sputtering machine of inept bickering and not-news, would end. In any other year, the season of Montreal's beloved Habs would be over a month old.

We have always dodged this fate in America. When baseball players struck in 1994, they at least did so when the NFL season was near. Disaster loomed in 2011, when NFL and NBA owners imposed lockouts, but full -- or mostly-full -- seasons came to pass.

But as of this week, Montreal is a sports-obsessed metropolis with zero sports. I can't imagine it. I don't know what you or I would do if all our sports left in lockstep. And I can't glean any more than a second-hand account of how it feels for such a dramatic 24 hours to be followed by an indefinite void.

Two fantastic episodes comprised this unacceptable finale -- one part dramatic victory, one part needlessly cruel defeat. Those were your sports, Montreal, in their most vivid, bleeding hues, and they were tremendous. Were. They've left, perhaps for quite a long time. I hope they haven't broken your heart.