Today in TAKEAWAYS Robert Wheel wants Bob Costas off his screen and the Dead Schembechlers on it as he recaps NFL Week 12.

Bob Costas is a total pro. In "Those Guys Have All The Fun," an ESPN producer noted that Costas was one of two people (the other being Keith Olbermann) that he could always count on to deliver a segment flawlessly.

So of course the brass at NBC, in appreciation of his years of hard work, gave Costas a valedictory by letting him deliver a halftime address during Sunday Night Football on whatever's rolling around in his brain. Unfortunately, Costas is an old-timey baseball person, so more often than not it involves talking about Willie Mays or Mickey Mantle or some other player who a) retired before I was even born and b) has nothing to do with football.
Costas has also been in the media bubble for too long and has no idea how regular people talk about sports. He has a habit of injecting black-and-white moralism into situations that don't call for it and of talking down to his audience because he assumes that he knows more than us; he still equates access with knowledge. His halftime segments may be a nice way to thank Costas for all he's done at NBC, but it's also a miserable way to condescend to your audience.
Bob Costas, you've had a hell of a career. But get your baseball out of my football.

TAKEAWAY: Thanks for getting Mom to turn on the TV, Lions

Most years this is a crap game because most years the Lions are a crap team. This usually means I miss the end of the Lions because I come from an early Thanksgiving dinner household. But this year we got to put on the game during the meal because it went to overtime. So I'd like to thank the Lions for being good (well, competitive) because not watching football when it's on is a terrible waste. There are kids in February-August who have no football, so you'd better fill up on what you can get. For this we say thanks.

Thanksgiving and New Years Day are like the two times my mom watches football all year, so this was the first time she'd ever seen Robert Griffin III. At the risk of sounding like a geriatric Hollywood producer, whatever "it" is, RGIII has got it. Lord help me if I'm ever back home for a Giants-Redskins game and she starts comparing him to Eli.

TAKEAWAY: This was a great game to watch after Thanksgiving dinner

Once Thanksgiving is over you're drunk and sluggish with turkey meat, an exciting football game is the last thing you can handle in such a state. You need the football equivalent of Billy Madison. So thanks for the LOLs in this one, Jets. Running into your own lineman's butt is hero work in my book. So is making Fireman Ed quit; he's the most annoying New Yorker not named Andrea Peyser or Pam Geller.

TAKEAWAY: Of course the sprinklers went off during a Dolphins game

Stephen Ross is sneakily one of the more incompetent owners in pro sports. His "sell celebrities a tenth of an LP interest" scam is a joke. He tried to hire Jim Harbaugh. When Harbaugh said no, he decided the team would play a whole year with a lame duck coach, and he actually let the team appear on Hard Knocks. So it makes perfect sense that if the sprinklers went off in the middle of the game, it'd be a Dolphins game.

If you are of small school weeknight football (sidenote: if you aren't then what's wrong with you?) then you already know T.Y. Hilton is a bawse return man/receiver. So you weren't surprised when he had touchdowns of the punt return and conventional varieties. Also, let's all start hating Colts fans again once Chuck Pagano is feeling well because they only had to suffer one year bad of quarterback play. Even I had to slog through the Kent Graham/Danny Kanell/Dave Brown triumvirate.

At least last year Colts fans knew they'd get Andrew Luck and the year before that the Panthers got Cam Newton. Meanwhile the Chiefs get...Jarvis Jones? Manti Te'o? Enjoy wasting a first round pick on the most fungible position, doods.

TAKEAWAY: Outlaw Raiders back y'all

I was nervous for a little while after Al Davis died. The Raiders hired a defensive coordinator as their new head coach? They didn't take Usain Bolt in the first round? They didn't trade three first-round picks for a guy coming off a PED suspension? But when the Raiders threw down with the Bengals toward the end of this game, it came as a relief. The NFL is a happier place when the Raiders and their Juggalo fans are getting into fights.

Eight turnovers! That's how many turnovers my high school would have when we'd play the state champion. And the Browns still barely won because Pat Shurmur just wants to get fired at this point. C'mon Jimmy Haslam, use your truck stop money to cut Pat a severance check so he can book a villa in Zihuatenejo before rates go up in the winter.

TAKEAWAY: The new injured reserve rule will fuck with your fantasy team

What? Beanie Wells was playing? He had the "IR" tag next to him in fantasy! 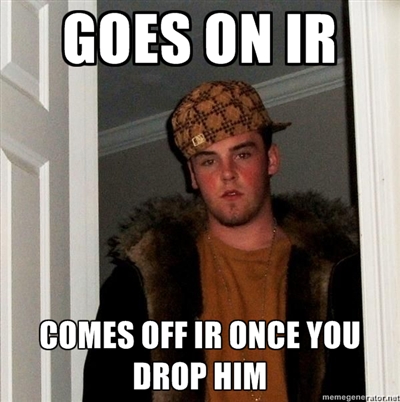 He tied his own lineman's shoe during this game! He's truly America's first meme quarterback. I could see him doing any of the following:

TAKEAWAY: The Falcons are setting up their fans for another disappointing postseason

I'm not a mathematician, but unlike Peggy Noonan and Mitch Albom I realize that numbers aren't witchcraft. And when Atlanta keeps eking it out in close games it doesn't mean they "know how to win" but rather they are "so lucky they're pooping horseshoes." The comeuppance will happen in the playoffs; my guess is that another 9-7 Giants squad will be the ones who do them in.

TAKEAWAY: Blaine Gabbert will be your team's next backup quarterback

The Chad Henne Era is upon us! Let's celebrate with an incredibly NSFW song.
Heart u, Dead Schembechlers

Every interview with Harbaugh makes him seem like a bit of a preening jerk (or at the very least like Mark Cuban if he wore a collared shirt) except he's played this team like a goddamn Stradivarius for the past two years. Now he's perfecting a midseason quarterback change for a division-leading team. This is going to be worse than when Belichick was racking up titles.

Who else is going to coach a team that loses because it can't stop its opponent on fourth and 29? Other than Mike Sherman, that is.

For all the hand-wringing over Eli's elbow owie, I was mostly concerned with how listless the Giants defensive line looked against the Bengals and Steelers. Apparently all they needed was the chance to play against a third string left tackle because they looked fabulous last night. Up next: the Redskins offensive line which, typical of the D.C. area, consists mostly of statuary.

What To Do Tonight Instead of Watching Monday Night Football

Panthers-Eagles will be a dud, so it's time for you to shed that turkey weight off at spin class, tubby. I'll be there because my Thanksgiving strategy is gravy makes everything taste better (note: strategy has worked for the past 28 years in a row).