Share All sharing options for: Kyle Lowry injury: Raptors' G rolls ankle, will not return to game vs. Thunder

Toronto Raptors guard Kyle Lowry left the game after rolling an ankle in the second quarter in Tuesday's contest against the Oklahoma City Thunder.

Lowry's ankle landed on the foot of Oklahoma City's Serge Ibaka, and he headed straight to Toronto's locker room. This picture, via Twitter user @cjzero, shows Lowry's ankle rolling near the front of Ibaka's right foot. 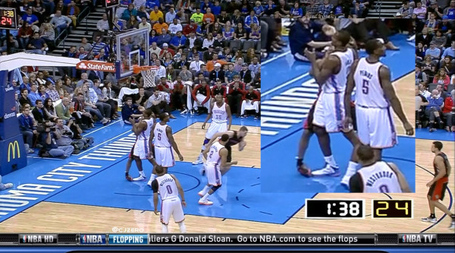 The injury is being called an ankle sprain and Lowry will not return to Tuesday's game, according to The Oklahoman's Darnell Mayberry.

Through three games this season with the Raptors, Lowry has been off to a scorching start, averaging 23.7 points, 7.0 assists and 7.3 rebounds per game. Additionally, he's shooting 57.5 percent from the field and 50 percent from the three-point line.

In Toronto's lone win of the season to this point, a 105-86 victory over the Minnesota Timberwolves on Sunday night, Lowry scored 22 points and added seven rebounds, five assists and three steals.