Lakers' inconsistent defense is a killer

In the aggregate, the numbers say the Lakers should be 13-8 right now. But a serious problem with consistency -- especially on defense -- has the team 9-12. The Hook looks at the good and bad in L.A.

Share All sharing options for: Lakers' inconsistent defense is a killer

On one hand, the L.A. Lakers are 9-12, 5 1/2 games behind the Clippers in the Pacific, in 11th place in the West, eight games out of first place, 2-6 on the road, having played five more home games than road games to date.

On the other hand ... nah, let's focus on that first hand for a while.

This is bad. This isn't a Small Sample Size Theater production any more: 21 games is more than a quarter of a season. It is at this point of the season that we start to get a sense of teams' true identity. Surprisingly decent teams who should be bad tend to fall off. (Hello, Bobcats. Meet the 2010-11 Cavaliers.) Surprising mediocre teams who should be great break out. (Great to hear from you, 2010-11 Heat.) Things come together, and the season begins to show real definition.

The Lakers enter this zone of the season on a two-game skid, giving up a combined 231 points to the Thunder and Jazz. Sunday's loss to Utah came at home, which is particularly odd: the Jazz are terrible on the road -- they had been 3-9 away from Salt Lake, with the wins coming in Toronto, D.C. and New Orleans -- and the Lakers had been passable if not good at home -- 7-5 with a solid margin of victory before the loss. Why would the defense crumble the way it did?

It's been a recurring theme, actually: the defense has been really, really erratic.

In the aggregate, over 21 games, the Lakers have a scoring margin of ... +3.1, which is roughly second-tier in the NBA. (It currently lands No. 8 in the NBA.) Using the Pythagorean theorem (brought to sports by baseball mastermind Bill James), you can determine that a +3.1 scoring margin through 21 games indicates a 13-8 record. The Lakers are not 13-8. They are 9-12.

Looking at individual game results helps ascertain why there's such a discrepancy: the Lakers' wins have a tendency toward blowout, and their losses are typically closer affairs. In the team's nine wins, the average margin is 17 points. L.A. has three wins of at least 20 points (and two of them, against the Mavericks and Warriors, came against decent teams). The Lakers' average margin in the team's 12 losses is -7. Eight of the 12 losses were single-digit affairs, compared to just one of the nine wins. The Lakers typically win blowouts and lose squeakers.

You know all of those studies that show "clutch" is basically a unicorn gene and that close games are more often than not toss-ups, no matter what Kobe Bryant fans scream? Those same studies say that, assuming nothing truly funky is going on, the Lakers' record will come around eventually, based on margin of victory. Scoring margin is a better implement than win-loss record, and scoring margin says the Lakers are currently the No. 8 team in the league.

But there is something funky going on -- nothing that will prevent L.A. from making the playoffs or even necessarily going deep. The Lakers' defense is just incredibly inconsistent. It's had some of the best performances in the league this season ... and some of the worst. This chart shows L.A.'s offensive and defensive performance game by game. Obviously, it's better for points scored per possession to be higher and points allowed to be lower. 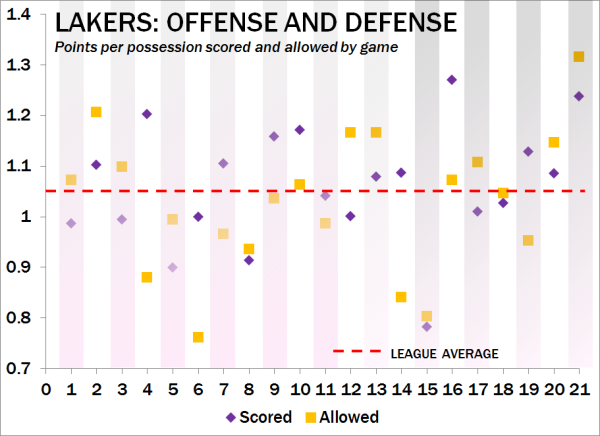 There are some outliers for L.A.'s offense (the diamonds), but it's pretty much tightly grouped around league average, skewing slightly above. (The Lakers have the No. 7 offense in the NBA.) The defense? It's all over the place. The data shows that the defense indeed has a greater variance than the offense on a game-to-game basis. The best defenses over the years tend to be pretty consistent. That's the thing about defense: effort is such a big part of it that it's hard to go "cold" on that end. The Lakers are proving that theory wrong. (By the way, the Lakers have fallen to No. 15 in defense after the two-game skid. A team with three-time Defensive Player of the Year Dwight Howard and perennial All-Defense honoree Kobe Bryant, at No. 15 in the league in defense.)

This is where all of those worries about how little time Mike D'Antoni reportedly puts into practicing defense makes you sweat (if you happen to be one of those people who actually want the Lakers to succeed). Consistency comes from preparation, from confidence, from effort effort effort. I'm not sure we saw any of that on Sunday in L.A.'s loss to Utah, let alone all of it. And, spoiler alert, Steve Nash is not going to fix the Lakers' defensive consistency. So while the win-loss record will eventually catch up to the team's true character (that of a good team), and while the offense will look nicer when Nash is cutting around and taking a load off of Kobe, there's a legitimate chance that this inconsistent defense will be the death of the Lakers. At this point, it's hard to imagine them slowing down the Thunder, Spurs, Knicks, Clippers or Heat enough in a seven-game series to win four.