Kyrie Irving's return spurred the Cavaliers to a 100-94 win over the Lakers. It also allowed us to remember just how good he is.

The Lakers' issues have been well-documented, and none of them really changed based on this result. They tried starting Jordan Hill over Antawn Jamison at power forward, and it didn't solve their defensive problems. The Cavaliers led throughout and finished the Lakers off late thanks to the brilliance of Kyrie Irving and Anderson Varejao.

Let's talk about those two for a second. For a 20-year-old, Irving has such an incredible understanding of the geometry of the court. Look at how he holds off the two Lakers defenders trying to contain him on the pick and roll, waits for Jordan Hill to retreat back to Tristan Thompson and only then delivers the pocket bounce pass to Varejao for the layup. 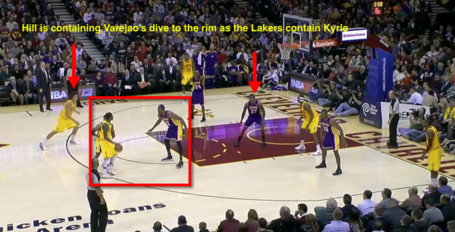 Kyrie maintains his dribble beautifully as the Lakers box him in, and as soon as Hill retreats to Thompson, Irving delivers a difficult pocket bounce pass to Varejao for an easy layup. 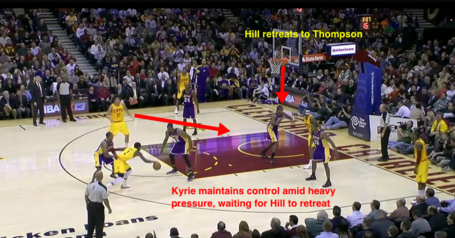 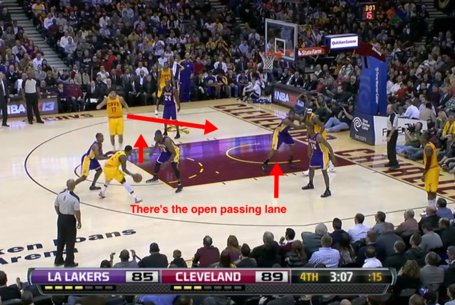 Twenty-year-old point guards aren't supposed to have that advanced understanding of the court. Irving does, and it's just one reason why he's special.

As for Varejao ... I'm still confused about the sentiment that the Cavaliers should deal him. Sure, they aren't winning the title with him now, but could you script a better pick-and-roll partner for Irving right now? If the Cavaliers' priority is to continue to develop Irving, they should only deal the player most responsible for aiding that development if a team truly bowls them over with an offer. I'm talking top-three draft pick, plus multiple young assets. No team, save for maybe the Oklahoma City Thunder using the pick they got from the Houston Rockets in the James Harden trade that originally belonged to the Toronto Raptors, has that kind of trade package to offer.

Another fantastic game between two clubs that are very evenly matched. The Nets came out really fast, but the Knicks stuck to their offensive principles, milked Carmelo Anthony for all he's worth and eventually won when Jason Kidd got away with a veteran maneuver to hit the go-ahead three-pointer. Watch the video.

One could argue that's an offensive foul or a flop, but the reality is that no referee on the planet is going to make that call in that spot. Kidd will accept his flopping warning today because it led to a critical win yesterday.

This was simply a case where the team that had more talent down the stretch was too much for the hard-working, undermanned opponent. The Bulls, without Derrick Rose, can't close out games like the Clippers can with Chris Paul. Paul's floater in the lane with under 30 seconds left was the kind of shot only five players on the planet could have made in that slot. (Rose is one of the other four).

Four Chicago starters played 40 minutes in this one. Tom Thibodeau continues to flip off management for removing his bench mob.

In a weird twist, the Nuggets fell way behind early, caught up late and then put the game away down the stretch. I'm confused, too.

This game set back offense decades, but I'm sure the Wizards don't mind. Nene was outstanding in the second half, and Jordan Crawford hit enough absurd shots to get them the win. Meanwhile, Ryan Anderson went scoreless after scoring 17 in the first half.