NBA scores: Warriors are for real after beating Heat

The Golden State Warriors' win over the Miami Heat is a signal to the rest of the league that they are absolutely for real. How are they doing it? With a more concerted effort defensively.

Share All sharing options for: NBA scores: Warriors are for real after beating Heat

The Warriors have been "for real" all season, but this victory certainly cements their case in the eye of the casual fan. Miami didn't play down to the Warriors and let them hang around and win at the end. This was a Heat team that gave an honest effort and lost because the Warriors were just better on this night.

Two things impressed me most about the Warriors in this game. One, of course, was the beautiful out of bounds play that got Draymond Green the game-winning layup with 0.9 seconds remaining. Here's video of the play.

That was pretty. Mark Jackson began the play with Stephen Curry coming off a baseline screen on the right, with Klay Thompson simultaneously running off a decoy baseline screen on the left. When Curry couldn't get open, Thompson ran along the baseline to the right side and popped out, while Curry ran towards the left corner. Then, and only then, did both Ray Allen and Shane Battier run out on Thompson, leaving Green wide open under the hoop for a layup. Sure, it was a defensive breakdown, but when you give the defense that many things to cover, they're far more likely to lose their concentration.

The second thing: Golden State's much-improved defense. Long a liability, the Warriors' defense has vaulted into the top half of the league even without Andrew Bogut, arguably a top-5 NBA defender. There's no real secret to Golden State's defensive success either. Jackson has just gotten significantly better effort and attention to detail than any of his predecessors. The Warriors' five defenders are, as the cliche goes, on a string at all times.

As an example, look at all the different ways everyone helps out each other on this intricate Miami play in the fourth quarter. 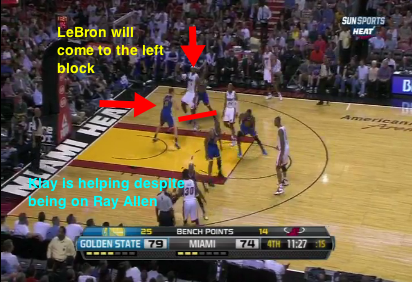 The play calls for James to catch the ball in the post. To prevent the layup, Klay Thompson has hung around in the paint long enough for Green to recover to James. Green quickly gets back and Thompson is able to retreat to the dangerous Allen. 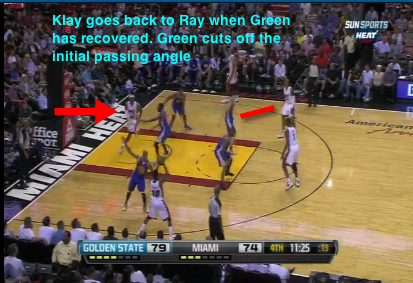 Green's recovery pushed LeBron further out than he wanted. Now, check the top of the key on this play. 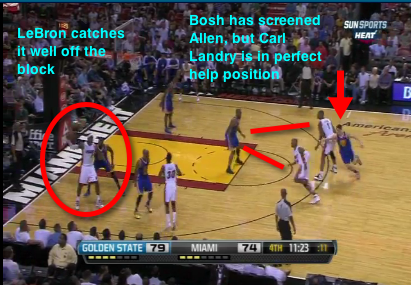 If Landry is an inch to the left, Allen rolls down the lane for a layup. But because he's in the perfect position to momentarily guard two men, Thompson's struggles fighting over Chris Bosh's screens don't cost the Warriors. In addition, look at how Jarrett Jack does just enough to prevent Allen or his man, Norris Cole, from scoring on a backdoor cut. 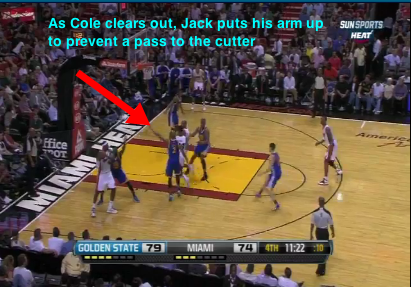 That cuts off the Heat's plan to get Allen a layup, and it also gives Thompson enough time to recover on Allen. 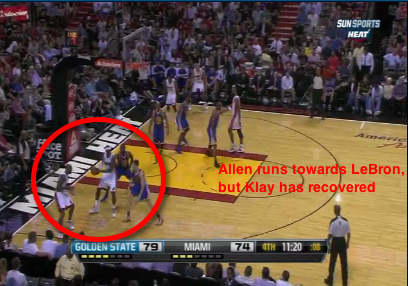 But the job is not done. James in an isolation situation can be lethal, and it's especially important to prevent him from getting into the lane. Watch as Thompson once again helps Green while not straying too far from his own man. 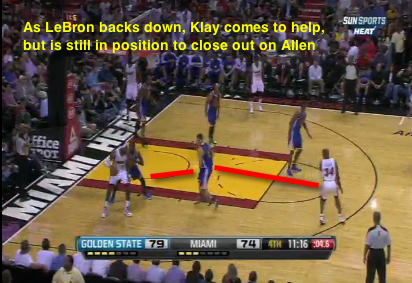 Thompson is not doubling James. He is just a body in the lane so James can't make a power move to his right and accelerate to the hoop. Notice, too, that he's positioned himself directly into the passing lane back out, making it difficult for James to draw Thompson to him and kick to an open Allen. Eventually, with less than three on the shot clock, James' only recourse is to shoot a fadeaway. Once Thompson sees that happening, he retreats back to Allen. 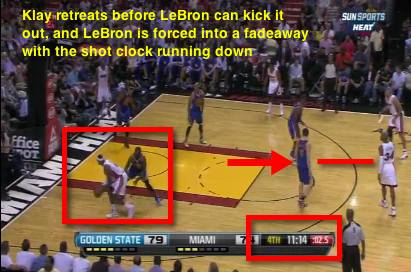 This is one of my favorite defensive possessions of the year because it shows all the ways the Warriors have grown. You have players giving multiple efforts to cut off all of the Heat's options. You have players helping each other and trusting that their help is only needed for a split second before the initial man gives the proper effort to recover. You have incredible attention to detail with Landry's spacing at the top of the key, Green's initial denial of the post-entry pass, Jack's raised arm to cut off a backdoor cut and Thompson's position right in James' passing lane on a potential kick-out to Allen. There aren't any special schemes here. Just good, old-fashioned team defense.

The crazy part? Once/if Bogut comes back, the Warriors' other four defenders won't have to cover nearly as much ground. This team is for real.

A fantastic game that ended with Mo Williams making two very dumb decisions late and getting away with one on the game-winner. On the previous play, Williams and Paul Millsap ran a pick and roll to force the switch, but Williams decided to take the shot himself instead of giving it to Millsap at the free-throw line against Tony Parker. Williams' shot missed, but Millsap rebounded and called timeout, giving Williams one last chance to go all hero-ball on us. Here's how that turned out.

Hey, it worked out great, but I'm guessing Ty Corbin wanted something a little easier.

Paul Flannery pretty much nailed it on this one. Thank god that game is over.

Minnesota led throughout, but then the Nuggets rallied from an 11-point deficit with under two minutes left and had the ball with a chance to take the lead. Thankfully for Timberwolves fans, Crunch-Time Ty Lawson struck again with another mind-boggling turnover, and the Timberwolves held on.

Kevin Love shot 3-17 in his first game since trashing the Timberwolves' management. Probably not how he envisioned that one going.

Bully that the Bulls won, of course, but Joakim Noah is now averaging more than 40 minutes a game. Tom Thibodeau is wearing him out.

Nevertheless, considering the Bulls were in Chicago less than 24 hours before this one, the win was impressive.

A really strange game. The Hornets were on the second night of a back-to-back, yet the Thunder looked like the more sluggish team. At one point, Scott Brooks took out a struggling Russell Westbrook to put in little-used Reggie Jackson, and that stemmed the tide a bit. If this was last season, the Internet may have exploded over the move.

Of course, given how well the Thunder have played recently, they were due for a letdown game.

Goran Dragic has been quietly fantastic in Phoenix this year. Hopefully, he gets some credit after this beautiful move to seal this game.

You think Houston is regretting letting him go to sign Jeremy Lin yet? I think they are.

As for the other side, I think it's time to be a bit concerned about the Grizzlies. They've made a habit of letting bad teams hang around, and it finally cost them against the Suns. Their offense has fallen back to earth after a hot start, and their bench, which was playing over their heads early in the year, has also fallen off. Zach Randolph got zero shots in the fourth quarter of this game, and that can't happen.

Hours after rumors surfaced that the Wizards rejected a trade for him, James Harden dropped 31, most of which came with Bradley Beal defending him. I'm going to guess that Harden took this game a little more seriously than most.

Paul George: 27 points on 18 shots, seven rebounds and only three three-pointers. He's becoming the player the Pacers desperately need him to be if they want to eventually get to the next level. Things will be really interesting once Danny Granger comes back.

The Clippers were tired after beating the Bulls on Tuesday night and it showed, but their bench is just too deep for teams like Charlotte to beat them.

The Nets hardly inspired much confidence with this win over a hapless Raptors squad, but at least Brook Lopez should be back soon. MVP of the game: Courtney Kirkland.

It was a bold strategy by Keith Smart to decide his starting lineup by drawing names out of a hat, but unfortunately, it didn't work.

There will be nights where the lack of offensive talent in Orlando is too much to overcome, even with great coaching and great effort. This was one of those nights.