The San Antonio Spurs got the benefit of some kind whistles during a crucial sequence to top division-rival Memphis. Also, the Heat turned up the screws defensively to rally and beat the Nets.

Share All sharing options for: NBA scores: Spurs get lucky break to seal win over Grizzlies, Heat shut down Nets

In NBA parlance, the San Antonio Spurs may have been the beneficiaries of a make-up call, so to speak. One day after being fined $250,000 for sending their top players home for a national TV game against the Miami Heat, the Spurs got a critical victory over the Memphis Grizzlies, sealed with two late calls in their favor.

The Spurs controlled the overtime period, but the Grizzlies came charging back, cutting the Spurs' lead to two on a three-pointer by Mike Conley. That set up the following situation: 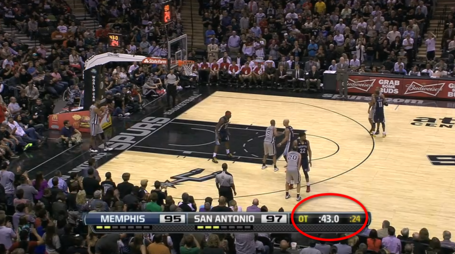 The Spurs inbounded with 43 seconds left. They ran a busted possession that got them nothing and ended like this. 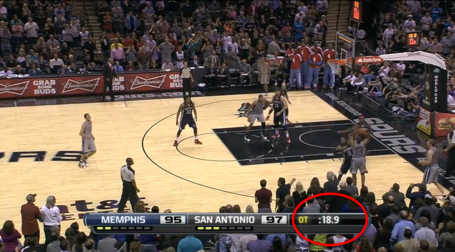 That's Gary Neal in the corner, preparing to fire a desperation shot to beat the shot clock. The problem? As you can see in the bottom right-hand corner, 24.1 seconds had already elapsed. Shot-clock violation, right?

Nope. The action continued as normal, and the play was never reviewed because you can't erase continuous action. To make matters worse, once the Grizzlies got the rebound off Neal's air-ball, they threw the ball away trying to pitch it ahead to Rudy Gay. Except... 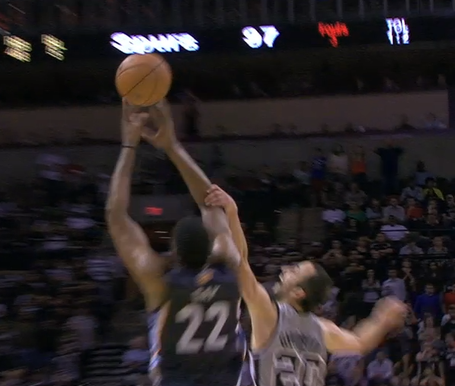 That's Manu Ginobili holding Gay's arm as he tries to catch the pass from Jerryd Bayless. It should have been a foul. Instead, the ball was ruled out of bounds off Gay's fingertips, and that was the end of the Grizzlies' comeback attempt.

Now, granted, these calls didn't cause the Grizzlies to blow a double-digit fourth-quarter lead or fall way behind in the overtime session. The rested Spurs fought tooth and nail to get this win. But the next time you have a friend that says the Spurs never get the benefit of anything from the league, show them those screenshots.

This one was unfair. For two-and-a-half quarters, the Nets played as well as any team in the league, racing to a double-digit lead. They played like they wanted to forget the 30-point beatdown the Heat gave them earlier in the season. But then, the slumbering Heat defense woke up, and the Nets had no chance. Miami held Brooklyn to just 30 points in the entire second half to win going away.

Dwyane Wade scored 34 points, with most of those coming in the first three quarters to keep the Heat within striking distance. Rumors of his demise may have been exaggerated.

One of the best games of the season ended with Nicolas Batum hitting a go-ahead three in the deep corner in the second overtime. To put that absurd shot into perspective, here is what Batum's body looked like right before he released the shot. 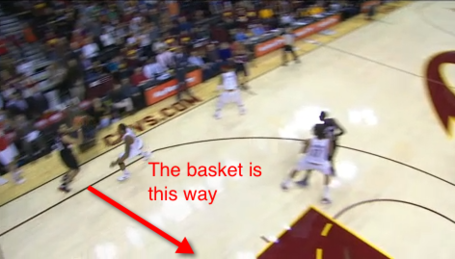 Batum is squared up to shoot on the other basket, and yet he still made the shot. More ridiculously, it was his second absurd game-winner of the game. Batum caught a rebound and flipped it in from 16 feet as time expired in the first overtime, but a review indicated he released the shot after the buzzer sounded. 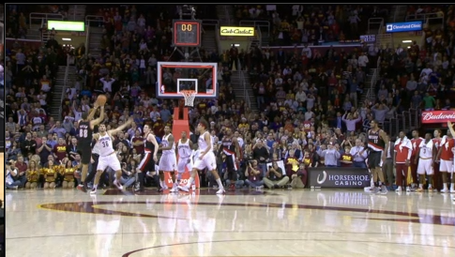 Too bad, because I enjoyed C.J. Miles' reaction to that shot. 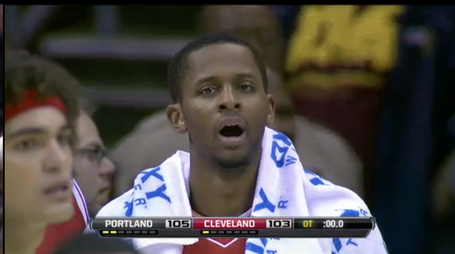 Nobody is enjoying Larry Sanders' breakout season more than Larry Sanders. The third-year big man from VCU had 18 points, 16 rebounds and five blocked shots off the bench, and the Bucks rallied from a 17-0 deficit to top the Celtics down the stretch. Too bad for Boston, because they wasted an actual good game from Jeff Green (18 points on 8-11 shooting). 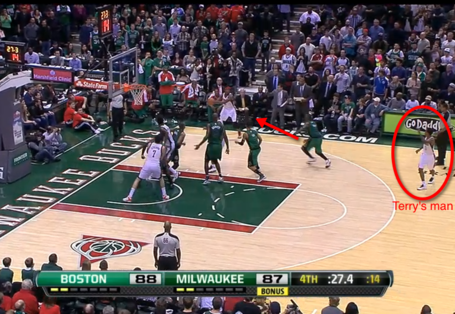 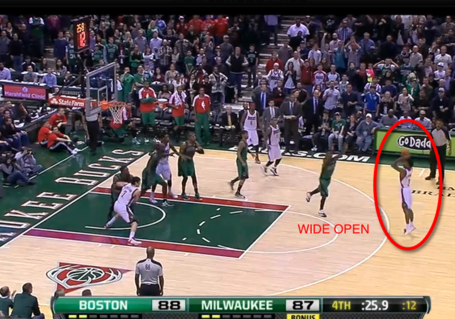 A fun game that unfortunately got obscured by other fun games. The Jazz are now 6-0 at home and 3-9 on the road. Someone needs to investigate the water at Energy Solutions Arena.

One of those classic close games that was ugly as heck. As Liberty Ballers described it:

There's nothing like making a run at the end of a quarter, only to see the other team stem the tide with a half-court shot at the buzzer. The Pacers had cut a double-digit lead down to seven, but Jarrett Jack's 60-foot shot gave the Warriors a 10-point lead heading into the final frame, and they were never seriously threatened after that.

Derek Fisher started at point guard and the Dallas Mavericks still won. This may be a problem, though:

"I don't think so, and we all know that; my teammates, they feel the same way, everybody feels the same way," Collison said prior to Saturday night's game against the Detroit Pistons.

The only important thing that happened in this game was Jimmer Fredette blocking Eric Bledsoe. I think the space-time continuum is broken.

The Thunder have now won their last four games by a combined 100 points. They've played some bad teams, but that's yet another sign that they're doing just fine without James Harden.