NBA scores: The Nets lose again, and Deron Williams is part of the problem

The Nets lost again, and Deron Williams is getting some justified criticism. Also, the Kings and Warriors play a classic out West, and the Thunder needed just two players to beat the Hawks.

Share All sharing options for: NBA scores: The Nets lose again, and Deron Williams is part of the problem

Now, let's talk about the Nets, like many people are. On some level, I'm not inclined to panic about this team's recent struggles. We forget how many new players the team has. More importantly, we forget how many players they have who are used to the plays being structured for them rather than having to work off other stars. The Nets' offense now is a weird amalgam of Jerry Sloan-style Flex action (Williams' old offense), Horns sets (where the two big men initiate the offense from the elbow), Hawks-style baseline screens, guard-guard picks (Joe Johnson's offense), standard high-pick-and-rolls and shuffle cuts to free up Brook Lopez. It's as if they are running many different offensive systems, each tailored to one of their stars.

I'm inclined to believe that element of the Nets' struggles will be solved with time. Already, you see them having some success with several of those set plays. That'll only continue as they learn how to play with each other and unlearn bad habits they developed in losing situations (for all the holdover Nets) or settings where they had free reign to break plays (Johnson). I also think that they'll eventually develop some more trust for each other where they aren't breaking plays to play hero-ball, like they did in the third quarter against the Knicks.

But I also think there are some scary issues. One is the defense, but few actually expected Brooklyn to be good on that end. The more concerning and surprising issues go back to Williams himself. For a supposed elite point guard, Williams has a really poor understanding of pace and personnel. He's supremely talented and versatile, but his decision-making and shot-selection were really poor in that third quarter and have been all season.

One issue Williams has is a tendency to get sloppy in transition. Here's one play in the third quarter where he committed a turnover. 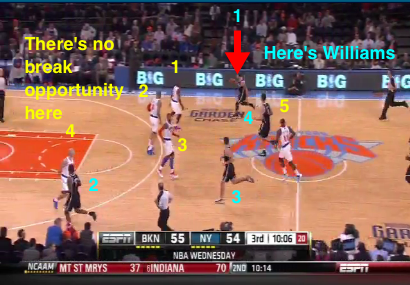 There are a lot of numbers here, so let me explain. This is a situation where the Knicks have missed a shot and the Nets grabbed a defensive rebound. Williams has the ball on the right wing. The yellow numbers refer to the Knicks players who are behind the ball (Ronnie Brewer excepted). The Nets numbers are in order of which guys are furthest into the frountcourt. As you can see, the Knicks have four bodies back to prevent any sort of fast break. The efficient play is to pull this out and run your half-court offense. Instead, Williams tries to drive around Felton and loses the ball out of bounds.

Here's another transition situation where the Nets actually got a good shot, but it wasn't the right play. 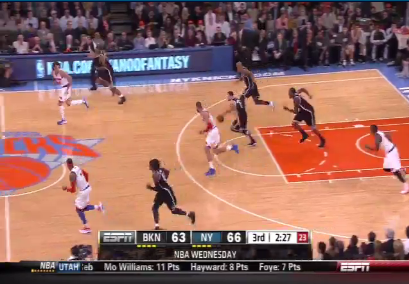 This is what the screen looks like right after a Nets defensive rebound. All five Nets players are still on the wrong side of half-court, while the fifth Knick not pictured is already back. Let's roll the tape a bit further. 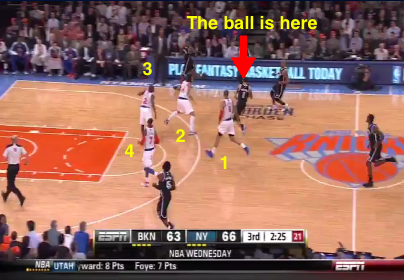 Once again, the Knicks have four players behind the ball. Trying to get a quick shot in this situation is not smart, especially because the tide of the game is starting to turn. Instead, Williams tries to set up the man behind him, Keith Bogans, for an open three. If that were Paul Pierce, Klay Thompson, Stephen Curry or, hell, even Joe Johnson, the logic would make some sense. But it's Keith Bogans. 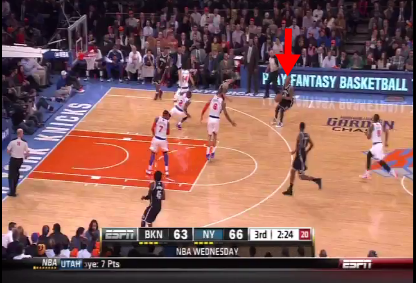 This isn't a bad shot on its surface, because Bogans is a pretty good three-point shooter, but the timing is bad. It's a home-run play, and the Nets' half-court offense is too dangerous on paper to go for too many home-run plays. If Bogans misses, the Nets have no rebounders to grab the carom. Williams simply has to be more patient than to rush for this shot.

Throw in all the poor shots, and the criticism of Williams is deserved. He has all the skills, but has lost his grasp on the sense of timing. In many ways, he's discovering that increased freedom has actually detracted from his game. At this point, Williams has to accept that being reigned in a bit will make him and his team better.

Leave it to their Northern California rivals to bring out the old Golden State Warriors. After working so hard all season to maintain their defensive approach, the Warriors allowed 131 points to an enigmatic Kings team. Yes, there are rare times in an 82-game season when the Kings' talent suddenly clicks. Yes, there are also times in an 82-game season where teams trying to change themselves revert to their old habits. But man, Mark Jackson has to be really mad about how this game turned out.

What a weird box score for the Thunder. Kevin Durant scored 41 points and grabbed 13 rebounds, Russell Westbrook had 27 points and 11 assists ... and nobody else scored more than nine points. Serge Ibaka had just four points (though he did grab 14 rebounds) and Kevin Martin only had six. And yet ... one of the key stretches of the game was early in the second quarter, when the Thunder first built a double-digit lead by going on a 9-2 run. None of those nine points came from Durant or Westbrook.

Of course, it's also true that this game only got interesting when Atlanta's second unit dominated Oklahoma City's at the end of the third and beginning of the fourth. So, who knows.

What's clear: the overwhelming talent of Durant, Westbrook and even Ibaka is too much for many teams, including good ones like the Hawks.

It's taken a while, but the Pacers are streaking. Paul George is becoming even more consistent and, while he's had better games than his 20-point, 11-rebounds, four-blocked-shot effort on Wednesday, he's also strung several of these types of performances together. It's also nice for Pacers fans to see Gerald Green finally wake up from his slumber with 21 points, because they'll need him to help fortify a very poor bench.

As for the Jazz, they were tired. Long night in Brooklyn the previous night, you know.

OK, fine, Paul Pierce. You're not aging. You didn't need to put together a 40-points-on-16-shots performance to prove it.

Houston has made many good defensive teams look silly this season, so I'm not surprised Doug Collins had no words about his team's play after the game.

Of course, as bad as Philadelphia's half-court defense was, its floor balance was even worse. This is an underrated element of good point-guard play. Without Jrue Holiday, the 76ers were taking too many shots out of their offense, which meant that they weren't able to set themselves up to properly retreat in transition. This is what you get when Evan Turner gets hurt and Dorell Wright essentially acts as your point guard.

Meanwhile, it looks like Jeremy Lin and James Harden are starting to find some really good on-court chemistry.

Monta Ellis really didn't have to welcome John Hollinger to Memphis with a 1-14 shooting performance.

When these two teams last played at Staples Center, the Hornets handed the Clippers one of the worst losses any elite team has received this season. Let's just say that didn't happen again.

The TORONTO RAPTORS have won four in a row, and they've done it with Andrea Bargnani and Kyle Lowry on the sidelines. An underrated key: Alan Anderson. The well-traveled wing supplied much-needed shooting in the fourth quarter, scoring 12 of his 16 points in the win.

These two teams came in as the two worst offenses in the NBA. It showed.

The only two good players in this game were Nene and J.J. Redick. Nene is on a minutes limit, so he played less than half the contest. Redick was not.

The Bobcats stink, unless they're playing the Lakers. So, let's instead marvel at this stat.

MKG, LeBron James only NBA players to each have two 25-point, 12-rebound games before the age of 20, per Bobcats.

Most of that came in garbage time, but still.