The Heat took advantage of some Thunder breakdowns down the stretch to win the Christmas Day headliner. Here's a recap of all five games.

This was a close game, if not a particularly well-played one. Both teams traded awkward crunch-time possessions, with neither team scoring for a long stretch late in the fourth quarter. The Thunder's offense seemed inhibited by Russell Westbrook's poor decision-making, while the Heat's offense resembled the "my turn" outfit we saw so many times before they broke through and won the title last year.

In the end, the game was decided because the Heat executed on a critical late-game possession, and the Thunder didn't. Oklahoma City's last offensive possession was a nightmare. Kevin Martin barely got the ball in, Westbrook and Kevin Durant ran into each other on a dribble handoff and both players ended up hoisting wild game-tying three-point attempts that missed badly. That was bad.

But what may have been worse was the Thunder's defense the possession before, where a rotation breakdown allowed Chris Bosh to get a wide-open dunk off a pass from James. What happened? Here's our best guess to decipher it, starting from when James got the ball. 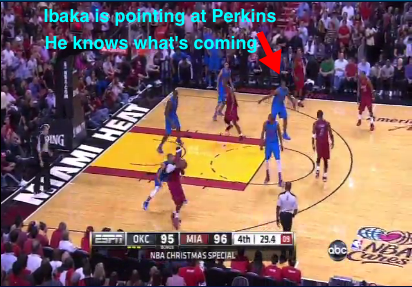 Kendrick Perkins is in the lane, and as evidence by Serge Ibaka's pointing, the idea is for Perkins to play a one-man zone on James to prevent him from getting to the baseline. There's another rotation that needs to happen here to prevent Bosh from getting a layup, but who has to make it? 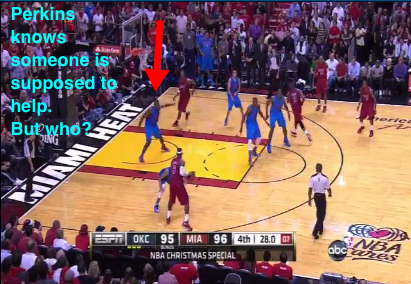 Honestly, it could be anyone. The Heat have three players stationed on the opposite side, and they're all bunched up together. Two Thunder players can easily guard those three Heat players while the third rotates down to Bosh. In the end, none of the three players do, and Bosh gets a layup. 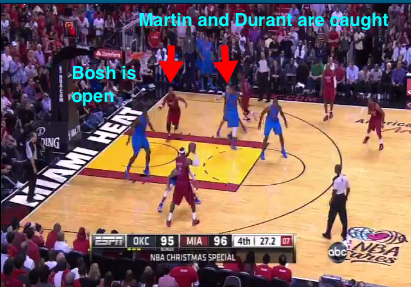 Twitter was quick to blame Perkins for the breakdown, but it appears that he did his job. One of Durant, Martin and Ibaka screwed up here. The question is, which one?

My theory: this wasn't supposed to be the rotation any of them were supposed to make. Before James caught the ball, he ran a pick and roll with Dwyane Wade. Watch how the Thunder defend that. 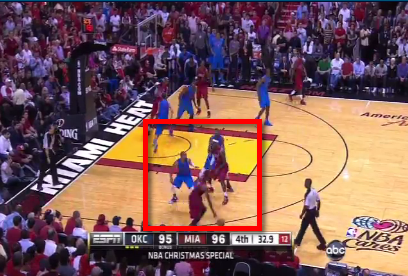 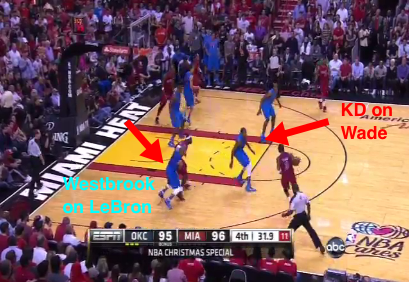 Westbrook and Durant end up switching the pick and roll, and I think that messed a lot of things up. For one thing, Westbrook is no match for James physically, so James could have easily scored in an isolation had Bosh not flashed to the open spot.

But more importantly, judging how the play worked out, it looks like one of Durant and Martin failed to make the rotation that Westbrook was ultimately supposed to make. The Thunder like to use Westbrook's ability to zone on the weakside when designing their defense, and my guess is that was their hope in this play as well. But with Durant now in Westbrook's role in this alignment, the rotation was slow and Bosh got a dunk.

Big-picture, there are a couple lessons from this sequence. For Oklahoma City, this illustrates why they can't play traditionally against Miami. You have big men like Perkins and Ibaka playing in space against the Heat's small lineup, and you've put yourself in a position where a simple Durant/Westbrook switch messes up your weakside rotations. If the Thunder play four wings and Ibaka, like they should, they can compensate with their length. Even if they play Nick Collison over Perkins, they should be more precise in their positioning. It feels like a broken record mentioning this, because it's been the major criticism of coach Scott Brooks for forever, but we'll continue howling about it until the Thunder actually make a change.

For everyone else, this is why teams always need to run actual plays late in games. This sequence was preceded by a weakside screen for Ray Allen and the aforementioned James/Wade pick and roll. The more elaborate the play, the more the defense has to focus on defending. In this case, a switch that happened in one element of the play ended up affecting the next element.

A good, solid win for a Lakers team that needed it. The most significant development was the frequency of Steve Nash/Dwight Howard pick and rolls down the stretch. Normally, that's Kobe Bryant time, but the Lakers correctly understood that the Nash/Howard pick and roll gave them the best chance to win. If the Lakers want to continue to have success, they'll need to keep employing that play late in games.

The Clippers' bench is terrifying right now. Denver is probably the second-deepest team in the West, and the Clippers' bench completely dominated them in the win. There will come a point where the Clippers will need to grind out a win while riding their starters, but the longer they can put that off, the better.

I have no clue what the Nets are trying to accomplish offensively. When they beat the 76ers on Sunday, a lot was made about how they installed elements of Jerry Sloan's old Flex offense to help Deron Williams. Any guesses as to when the Nets ran their first Flex set of the game against the Celtics? The nine-minute mark of the third quarter. How does that happen?

UPDATE: Others have pointed out that I missed the Nets running the Flex set on the second play of the game and a couple times in the second quarter. I still think they did not run it nearly as much as they should have, but I regret the error.

Both Williams and Avery Johnson deserve a ton of blame here. It's nearly January, and the Nets still have no offensive identity.

Houston is an absolute terror in transition. They have great shooters that spot up behind the line, fantastic athletes that can run to the rim if needed and, oh yeah, they have James Harden. You really have no choice but to foul Harden if he gets a head of steam, and even that usually doesn't prevent him from scoring.

It's getting to the point where teams just need to concede the offensive glass when playing Houston. You need all the bodies back on defense that you can muster.