Our countdown of the team that put its fans through the most painful calendar year begins with Nos. 16-13.

Share All sharing options for: 'Could be worse' countdown: Nos. 16-13

Over the next few days, we are counting down the 16 fanbases that suffered the most pain during the 2012 calendar year. For more on how this countdown works, click here. Thursday: teams No. 16-13. 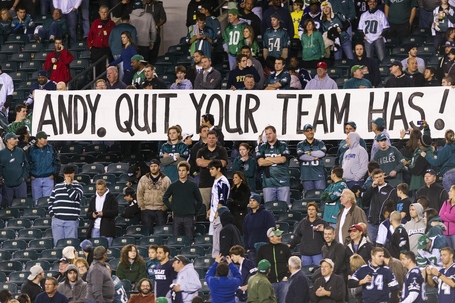 Remember when this was supposed to be the year where the Eagles would be the NFL's Dream Team? OK, maybe that was last year, but at least 2012 was supposed to be better, right? Not so much. The Eagles entered the year hopeful that Michael Vick could hold up for 16 games and confident that top 2011 free-agent acquisition Nnamdi Asomugha would fare better in his second year in a new system.

Instead, Vick couldn't stop turning the ball over, Asomugha was even worse and the team faded badly after a 3-1 start. A decade of excellence under Andy Reid is now on its last legs. Next season's Eagles will likely be in the same spot as other rebuilding football teams, and for a franchise that has been a model for others for so long, that's a deep fall.

The evidence, by Ryan Van Bibber:

Waking up is hard to do.

An Eagles fan describes the difficulty of rooting for their team in 2012.

Ah, the chain reaction. Michael Vick's biggest problem in Philadelphia has been a lack of protection from his offensive line, and not coincidentally, Andy Reid made the call to install O-line coach Juan Castillo as the new defensive coordinator. The defense fell apart, the offensive line turned into block of Swiss cheese and the downfall of Reid's Eagles began. Now, a coaching tenure that includes six division titles, five NFC championship game appearances and one Super Bowl appearance will be remembered as an ultimate failure, and the next time the Eagles will be a relevant contender? 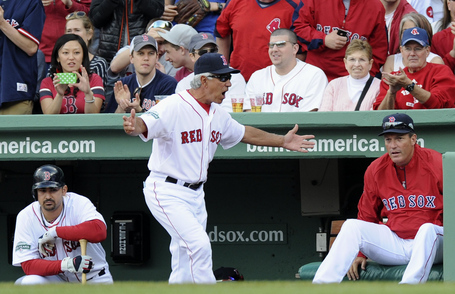 Save your complains about how Red Sox fans are spoiled, because 2012 was an awful year by any team's standards. The Red Sox hired Bobby Valentine and tried to clean up their locker room on the heels of a horrible 2011 collapse, and things just got worse. Valentine wasted no time in alienating every key member of the locker room, and the team fell quickly to mediocrity and then to irrelevance as the season went on.

We may one day look back at the 2012 Red Sox as the outlier for a model franchise, or we may look at it as the year when a model organization started to fall apart once again. Only time will tell. What is clear, though, is that 2012 was not a fun year to be a Red Sox fan.

The evidence, by Rob Neyer

Expert witness: Ben Buchanan of Over The Monster.

A Red Sox fan describes the difficulty of rooting for their team in 2012.

The Red Sox picked up right where they left off after their September collapse. New general manager Ben Cherington made the worst of a bad situation by ruining Daniel Bard with a move to the rotation, and then traded away Josh Reddick and others for two new arms who combined for a 6.41 ERA in their attempt to replace Bard in the pen. The ill-conceived addition of Bobby Valentine pushed an already volatile locker room into open rebellion, and only a payroll-clearing fire sale in August kept the year from being a complete waste as the Sox dropped into the A.L. East cellar. 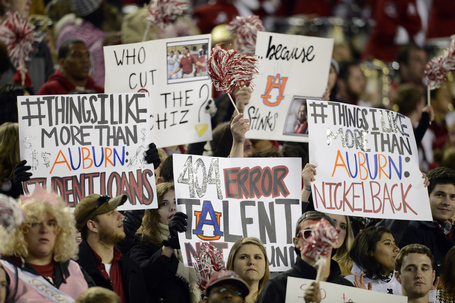 Even the most reasonable Auburn fan figured that 2012 was not going to be an especially great year. If the Tigers clawed their way to eight wins and the Chick Fil-A Bowl, the season probably would have been deemed a success. Instead, things were far worse than that. Two years after winning a national championship, the Tigers won zero SEC games. You'd be hard-pressed to find a swifter collapse of a college football champion.

Worse, Tigers fans have seen their bitter rivals rise once again. Alabama won the 2012 BCS championship with a win over LSU and are heavily favored to repeat in the 2013 BCS title game over Notre Dame. For an Auburn fanbase that has a large inferiority complex as is, those titles sting even more.

The evidence, by Jason Kirk

An Auburn fan describes the difficulty of rooting for their team in 2012.

Why it sucked to cheer for Auburn football in 2012:

Two years after winning a national championship, Auburn fans witnessed the Tigers' worst season in 62 years, as the team finished winless in conference play for the first time since 1950. The defense was abysmal, allowing 420 yards and 28 points per game, and the offense was even worse, gaining 235 yards and scoring 10 points on average against SEC opponents.

As if Auburn sucking wasn't bad enough, arch-rival Alabama won the SEC title and is about to claim its third national championship in four years. Pass the bourbon, please. 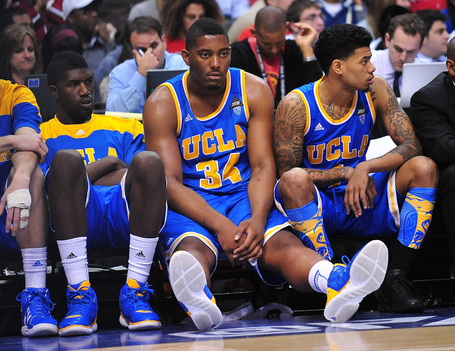 The aura of the marquee program in college basketball had faded by 2012, but this year left absolutely no doubt that it was gone. Much was expected of UCLA on the court this year, but we've instead seen a team that failed to qualify for postseason play in 2011-12 and is well on its way to an equally disappointing year in 2012-13. Worse, the rumors that things were deteriorating inside Ben Howland's program bubbled to the surface, and key pieces such as Josh Smith massively disappointed and eventually transferred.

Things were supposed to improve with the arrival of highly-touted freshman Shabazz Muhammad, but even that didn't go as planned. Muhammad was ruled ineligible in a bizarre NCAA investigation, then underwhelmed once he was finally cleared. Things appear to be turning around for him now, but he clearly hasn't been the immediate program-savior that many expected him to be.

For things to improve in the future, it looks like a major facelift is needed. Perhaps that's what ultimately results from the debris of 2012, but until then, UCLA fans are in a tough place.

The evidence, by Mike Rutherford

A UCLA fan describes the difficulty of rooting for their team in 2012.

Ben Howland is a decent coach who is good at rebuilding a program. But when it comes to maintaining an elite program, he is not much. Howland's mismanagement of personnel, head-scratching recruiting decisions (the Bruins haven't brought in a true points in years) and complete detachment from his players has turned coach John Wooden's program into a dumpster fire. Rumors are swirling that UCLA's incompetent athletic director maybe looking to kick Howland to the curb to save his incompetent behind, but until there is a sense of accountability at the top of UCLA athletics, there appears to be no end to the tragicomedy that is UCLA basketball.