Dirk Nowitzki was nowhere to be found as the Mavericks collapsed late in an overtime loss to the Thunder. Also, the Clippers routed the Celtics for their 15th straight win.

This was a classic case of a really good team sleepwalking through a home game and winning anyway because their opponent is really bad. Mavericks fans probably don't want to hear that about their team, but it's the reality. O.J. Mayo has cooled off after a torrid start and Dirk Nowitzki isn't himself yet. Darren Collison came through with a big game and a ridiculous buzzer beater, but when the Mavericks needed to execute down the stretch, Collison couldn't get them into their sets well.

Though, in defense of Collison and Mayo, it was weird how Nowitzki avoided the ball late in the game. I realize that he's still not fully back from his knee injury, but in rewatching some of these late possessions, some of the issues I initially attributed to the guards may have stemmed from the star player not doing enough to help them out. We as analysts are often too quick to blame the man with the ball and forget that the man without the ball also has a job to get open. Take a look at a couple of the plays.

First, let's look at one in the fourth quarter. The Mavericks are trying to force the Thunder to switch a high pick and roll, which would allow Nowitzki to back the smaller man in at the free-throw line extended. The execution isn't perfect, but Collision manages to force the switch. Except ... 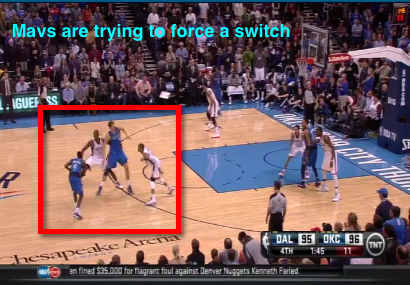 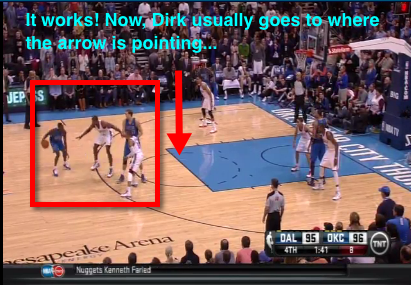 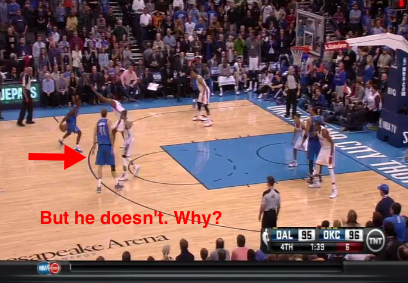 As you can see, Nowitzki never tries to back Russell Westbrook down, forcing Collison to go one-on-one against the lanky Serge Ibaka.

The same scenario repeated itself in overtime. Look at this play. 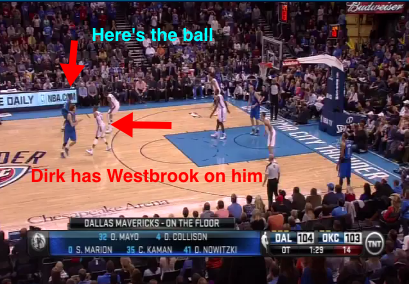 By now, Collison has already forced the switch. There are 14 seconds on the shot clock, so there's plenty of time to get Nowitzki the ball. Problem is, Nowitzki clearly doesn't want it. 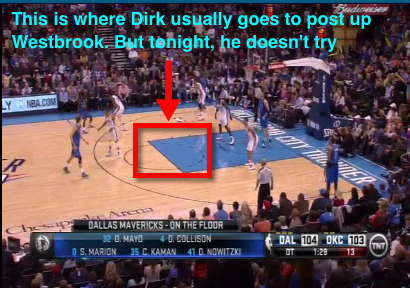 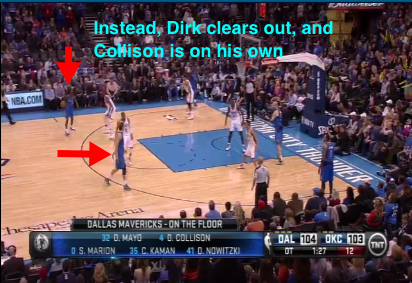 There's Dirk clearing out to the weakside to space the floor. Why? I'm pretty sure Rick Carlisle called these plays to get Nowitzki the ball against the smaller man, not Collison the ball against the taller man. I also don't think Collison waived Nowitzki off, because he's not that dumb. Even if he was, if Nowitzki forced the issue and backed Westbrook down, I'm pretty sure Collison would have relented and gotten him the ball.

It's easy to blame the point guard without much of a reputation, but a star player is a star player for a reason. He has to make life easier for those less talented than him by getting open and forcing said players to get him the ball. It's not like it's any secret who the franchise player is here. Nowitzki usually wants the ball late in games. On this night, he didn't. That's probably the truest indicator that he's not all the way back from his knee injury.

Paul Flannery has more on this game here.