Our countdown of the teams that put their fans through the most painful calendar year continues with Nos. 8-5.

Share All sharing options for: 'Could be worse' countdown: Nos. 8-5

Over the next few days, we are counting down the 16 fanbases that suffered the most pain during the 2012 calendar year. For more on how this countdown works, click here. Saturday: teams 8-5.

I root for this franchise. The motto of those like me who invest so much time in it comes from former coach Flip Saunders. After a particularly difficult loss several years back, he went up for a press conference and declared, "Don't ever think it can get any worse, because it can." Truer words have never been spoken.

Because this is too depressing to recount, let's just get to the evidence.

The evidence, by Mike Prada

A Wizards fan describes the difficulty of rooting for their team in 2012.

The worst part of the Wizards' season? That the season isn't over yet. In 2009, general manager Ernie Grunfeld traded the lottery pick that would become Ricky Rubio in a win-now move for a team that won the draft lottery. Of course, there's more to Grunny's story and new owner Ted Leonsis chose to retain his services in the 2012 off-season. Ernie traded over $20 million worth of cap space for when the ultra-punitive cap measures kick in next season in a win-now move for a team on pace for the best odds to win the draft lottery.

We Wizards fans are quietly terrified that with the pressure of a bottom-three finish mounting, Grunfeld will be itching to pull the trade trigger and we'll have to watch Ernie Grunfeld happen to us. All. Over. Again. 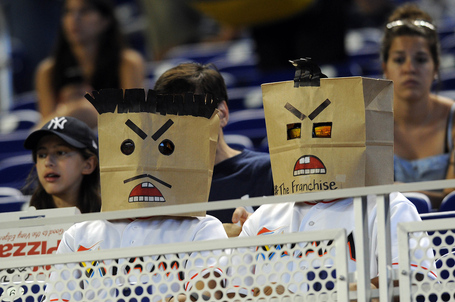 The Marlins have torn their fans a new one before, selling off all major pieces of two championship teams just so the owner could save a few bucks. By now, if you're a Marlins fan, you understand that this organization could very well have done it again.

But still, 2012's con job was more conniving than most. The Marlins ushered in what seemed like a new era, opening up a brand-new stadium in one of the area's more downtrodden burrows. The new facility, much like several in urban areas before it, was supposed to lift up the town by giving them a product everyone could enjoy. Sure, the stadium was financed by the Miami taxpayers, but that's par for the course these days. If the Marlins could actually put together a consistent product that made serious attempts to win for years to come, it all would have been worth it.

Of course, that's not what ended up happening. The Marlins went on a ridiculous spending spree in an attempt to drum up the necessary interest to initially fill the ballpark, but once things started to go south, they sold off every key piece ... again. Once again, Marlins fans were caught in the ruse.

Only this time, they had to foot the bill for an expensive new ballpark, put up with a manager that publicly supported the biggest villain of so many residents and watch a disappointing on-field product.

The evidence, by Rob Neyer

A Marlins fan describes the difficulty of rooting for their team in 2012.

The Miami Marlins have long been considered a yearly disappointment, but the scale of disappointment was often small. In previous years, the Marlins would fail to compete in NL East or fall just short, but they were not expected to do all that well thanks to financial constraints. But the 2012 season was supposed to be different. The team loaded up on pricey free agent pickups, dramatically increased payroll and fielded a team that appeared to be capable of winning a Wild Card spot or division title. However, instead of having a competitive year with playoff aspirations, the Marlins were sunk early and had the most disappointing season in team history given the high expectations.

The year was capped off by the most outlandish fire sale trade in the team's history, a deal that sent shock waves through an already downtrodden fanbase and sent the entirely wrong message about how the team would be run. Not only did the Marlins fail to meet their lofty 2012 expectations, but they ended the year by bailing on their long-term plans and seemingly reverting back to their old ways. That makes the 2012 year a major disappointment on both the management and on-field fronts, and the depressing double-whammy makes it the worst year for a fanbase in 2012.

At a certain point, the downfall of Arkansas football in 2012 was so sad, even fans had to laugh. They entered the year expecting to compete with the very best football teams in all the land for a national title. Then, their coach was fired in one of the more bizarre scandals in NCAA history. Then, they replaced him with a man who was, to be kind, completely under-qualified for the job. Then, they lost to Louisiana-Monroe and fell from the top-10 to unranked.

The evidence, by Jason Kirk

Arkansas: From top-10 to mentioned only in police reports.

An Arkansas football fan describes the difficulty of rooting for their team in 2012.

Arkansas fans never thought we'd see anything surpass the absurdity of the Houston Nutt/Mitch Mustain saga, but Bobby Petrino saw that hurdle, took out his motorcycle and jumped over it like Evil Knievel jumping over a stack of cars. The image of Petrino with scrapes over his face, a Darth Vader neck brace, and a Sugar Bowl cap is ingrained in Razorback lore. People can't mention the on-campus recruiting coordinator position or the Razorback volleyball team without making a Jessica Dorrell joke.

It only became worse when bankrupt John L. Smith was hired for the season, promptly leading Arkansas to two of the worst losses in program history in his first three games, spawning mass hysteria and a lady taping up her nose to look like a pig snout while making motivational Razorback YouTube videos. Our preseason top ten program finished 4-8 and fans spent the last month of Tyler Wilson and Cobi Hamilton's career coming up with crazy coaching search rumors. 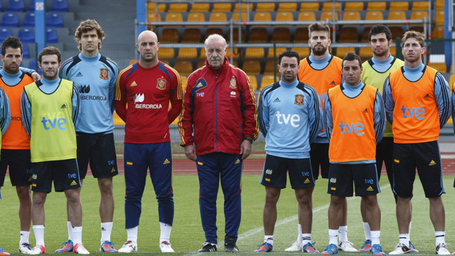 There were many international soccer teams that we could have selected for this countdown, but we settled on Villarreal because they experienced the perfect storm of disappointment. Come into the year with high expectations? Check. Lose one of their best players to injury? Check. Sell off their top star? Check. Get knocked out of their league in heartbreaking fashion? Check. Experience a horrible tragedy? Check. Perhaps the only bad thing that didn't happen to Villarreal this year was a relocation.

The evidence, by Kevin McCauley

A Villarreal CF fan describes the difficulty of rooting for their team in 2012.

Villarreal fell from fourth in La Liga the year before to 18th and relegation to the Spanish second division last season, but that only begins to hint at the agony the Yellow Submarine fanbase suffered.

If games had ended after 80 minutes, we would have been in the top six in la Liga, but we leaked goals in the last minutes of matches to put us in relegation danger as we entered April 2012. Not to worry, though, because Giuseppe Rossi was coming back from his knee injury to help us ... except that he tore up his knee again just before returning. So that ship sailed.

Still, we only needed one point from our last two games. What happened? We lost the first to an injury-time goal and the second to a goal in the last two minutes of regulation. That, combined with an injury-time goal in another match, conspired (I use the term deliberately) to send us down.

The 2012 bad luck still wasn't done. We had to sell some excellent players (doing well in Italy, Spain, and the EPL this season) and cut our budget by over half in the off-season. We hired a coach everyone agreed was the perfect choice to lead us back to the first division -- Manolo Preciado -- but he tragically passed away from a heart attack the day after being introduced as our coach.

In the first half of the Segunda season, we have been underwhelming. We're in the playoff hunt, but far from the juggernaut we hoped we'd be. Rossi still hasn't returned, our new coach hasn't impressed us and we are losing to teams our B team used to beat last year.