The SEC Championship was the game of the year in college football. Sadly, it wasn't close to being the biggest story of the day, let alone the weekend. We've got both the terrific and the tragic in this week's Monday Morning Jones.

Usually, we lead off the Monday Morning Jones with the biggest story of the weekend. But just 48 hours later, that one's still too heavy to start with. But if you've ever thought of hurting yourself, or fear that you might, please bookmark this link now.

Congratulations to the winner of the Game of the Year. Let's be clear on one thing -- the Alabama Crimson Tide isn't exactly the team we saw earlier this season. That's not just because their defense has proven more leaky than expected. The biggest issue was that the Crimson Tide came into the SEC Championship wondering if they would have to burn a redshirt because they had so few healthy receivers. Though A.J. McCarron didn't play his best game, some of that had to do with the fact receivers struggled to get open. A team expected to have options in the run and pass games could be successful if it ran at Georgia over and over, then did it again and dared the Bulldogs to stop it.

Georgia couldn't stop it. With 6:31 left in the third quarter, Bama abandoned the pass. They even spread UGA out to run in a (then) seemingly unnecessary two-point conversion, primarily because they could. They only attempted three passes the rest of the game (plus one pass interference call). The third, a 45-yard touchdown throw to Amari Cooper set up by the 155 rushing yards the Tide racked up in that time, won the game.

Sure, Nick Saban's defenses are the first thing they think of when Alabama's mentioned. But in the Tide's last three games against ranked foes, they've surrendered 420 yards per game. Their defense isn't in the same class as last year's, and isn't even the best in the SEC (Florida didn't give up 400 total yards all season). But only Texas A&M has stopped the Tide from running, and that's why they're still rollin'. 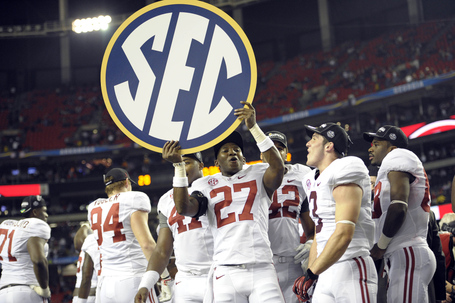 And a little tough love for the loser. Congratulations to the Dawgs for keeping it close, but did you ever think for a second Saturday's matchup at the Georgia Dome was between equally matched teams? In spite of the talk that Georgia has more NFL talent on its defense -- probably true -- and the attempt to make Shawn Williams' declaration his teammates were "soft" into a Tebow moment, Georgia ultimately lost because Alabama was that much more physical than they were. Their great pass defense made Bama one-dimensional, but UGA was powerless to stop the Tide's ground game. Alabama held the ball for 15 more minutes. And, in a game where Alabama made plenty of uncharacteristic mistakes, it was still Georgia who made the biggest one, in the most crucial of moments.

So sure, you can look at a close score and assume Georgia just gave ‘em all they could handle, or you could look deeper and see that Georgia is still a clear step below the upper echelon of the SEC. They probably played their best game of the year. Aaron Murray played as well as he ever has in a game of consequence. Todd Gurley looked like the best Georgia back at least since Garrison Hearst. And Alabama, weakened by injury and its own miscues, was still clearly better prepared and physically superior.

The calls to fire Mark Richt won't restart after this loss. But the reasons they started in the first place ... did they ever go away? Or did a light schedule and good fortune put UGA in the SEC Championship game in spite of being the conference's fifth or sixth best team?

These BCS bowls sure look boring. It's good for those who make money off amateur sports they got the championship game 20 ratings are made of. But the rest of these? Kansas State and Oregon, teams with two totally different spread offenses, could make the Fiesta Bowl interesting, but who's excited about it outside of Kansas? The thought of Louisville's Teddy Bridgewater, a Miami native, facing Florida in the Sugar Bowl is intriguing, but eventually we'll have to watch Florida play offense. And the Orange Bowl, though it has the cuddly Northern Illinois story, caught another matchup that makes it long for the days it got Oklahoma or Nebraska every year. But the big one? Expect the highest ratings for a BCS Championship Game since the greatest college football game ever played, the Rose Bowl of January 2006.

How big was the Steelers' win in Baltimore? Pittsburgh, now 7-5, may have saved its season with Sunday's huge 23-20 win against the Ravens. Charlie Batch, more than capable at age 36, was the game's biggest story. But as was written here last week, the Steelers needed to force turnovers to have a chance, and the team ranked 30th in takeaways going into the game coaxed two. One of them set up the game-tying touchdown.

In Pittsburgh's next four opponents -- San Diego, Dallas, Cincinnati and Cleveland -- three of those look quite winnable no matter the quarterback. The other, against Cincinnati in Week 16, may prove to decide the final Wild Card spot in the AFC. By then, Ben Roethlisberger should be back. So yeah, this win was pretty big.

Will the Bears beat a good team this season? Sunday marked the Bears' third loss in four games, this time falling 23-17 at home to the Seahawks. That was Chicago's seventh game against a team currently .500 or better, and their fourth loss. The three wins? The Colts in Andrew Luck's first game, the Cowboys in Week 4 and the Vikings last week (and how good are those teams, really?). The Bears once looked like a lock for a first-round bye in the NFC playoffs. Now, they're behind the Packers in the NFL North.

Vaunted though their defense might be, they struggle to stop the run, and they did again against Seattle. Their offensive line protected Jay Cutler, but Matt Forte could only manage 66 yards on 21 carries. And while Cutler had one of this best games this season, 10 of his 12 completions to wide receivers -- and 14 of his 26 total attempts -- went to Brandon Marshall. If this were Madden on Rookie, throwing every pass to one receiver and rushing the passer would be a helluva strategy.

I hurt myself. I can't finish the column.

Jim Harbaugh made the right move naming his starter already. Colin Kaepernick wasn't very good in Sunday's 16-13 overtime loss to the Rams, but he wasn't bad. He made young mistakes, like not making sure he avoided a safety when he was flagged for intentional grounding in the end zone in the third quarter. Or his foolish decision to go out of bounds at the Rams' 15 with under two minutes in a tie game rather than staying inbounds and milking the clock. One could argue either mistake cost the 49ers a divisional win. But if Kaepernick is the starting quarterback -- and Harbaugh says he is -- it wasn't a performance that should get him benched. The dimensions that make him an upgrade over Smith -- his speed and arm strength -- were on display again.

He remains the best option for the Niners if they want to win the Super Bowl. But until Harbaugh came out and said Kaepernick was his guy, we'd spend each week wondering what it will take for Smith to retake the job many believe he shouldn't have lost. The game had to end. It's not just too late to go back to Smith. It's too late to pretend that was really an option.

The Jets have a new quarterback controversy. Mark Sanchez threw three interceptions Sunday. He was benched in favor of noted winner ... Greg McElroy, who led the solitary scoring drive that gave the Jets a 7-6 home win over the Cardinals. Now, Rex Ryan doesn't know who will be the Jets quarterback next week. So does this mean, when Tim Tebow's broken ribs are healed, he'll become McElroy's backup? Does Sanchez just go one step down on the depth chart, which makes him the backup quarterback/wildcat quarterback/punt protector?

This is what it's come to. I give up. Any Jets fan who hasn't deserves what they get.

One last thing on Benchgate or whatever we're calling it. It seems insane to say a spat between an embarrassed commissioner and defiant head coach is too important to ignore. But the most important part of the David Stern-Gregg Popovich kerfuffle was lost -- that it seems Stern has, literally, no credibility left.

Obviously, Popovich did this to spite the league and send a message about scheduling as much as rest his players. Tony Parker, Manu Ginobli or Tim Duncan could have taken any game off. Popovich could have staggered when his aging superstars rested. Instead, Pop put those three and Danny Green home on a commercial flight, rather than have them participate in the league's weekly showcase game. A game, by the way, TNT paid a pretty penny to broadcast. And people think the boss was supposed to let it slide when the Spurs' biggest names aren't there for viewers to see?

Of course, Stern made it worse with his snide statement promising punishment, one that most have already forgotten. That the commissioner, once the gold standard at his position in American sports, felt the need to make a petty threat to the Spurs through the media was disheartening. But the worst part for Stern was that fans and media are so conditioned to point out his flaws and hypocrisy that, somehow, Popovich was somehow turned into a hero fighting against the constraints of his meddling boss. No, this was an unprofessional pissing contest, and there wasn't a single winner after all was done.

But the loser was Stern, assuming he had anything left to lose. Fans and media no longer believe or trust what he says, or the reasons he speaks. He's gone from commanding the respect of a college president to being tested by his subordinates like a high school principal. You think 2014 can't come soon enough for us? Imagine how badly Stern must be ready to move on.

The Chiefs have acknowledged Jovan Belcher and Kasandra Perkins' deaths on Sunday. The NFL has only stopped for natural disasters -- sometimes, not even then -- and 9/11, so my initial shock that Chiefs-Panthers was played was quickly replaced by the cynical understanding required to closely follow the NFL. The only real mystery was how, pre-game, the Chiefs would handle the murder of Perkins and suicide of Belcher. The decision was made to have a moment of silence for unnamed victims of domestic violence, perhaps the closest the Chiefs could come to recognizing the death of a member of the organization without giving the appearance that he was being elevated after Belcher's horrific crime.

While I understood the decision, I disagreed with it. If the Chiefs players had to play the game -- had they said they didn't want to play, my guess is the game would still have been played -- in spite of everything they were dealing with, it would have only been fair to acknowledge their grief. No matter how horrible anyone believes Belcher was, there's a reason his locker remained intact at Arrowhead Stadium -- the Chiefs locker room, full of guys who couldn't have processed everything by kickoff, lost one of their own.

While all most of us know is that Belcher was a murderer, they knew the man and, clearly, they miss him. The dead aren't remembered because they were good. They are remembered simply because they are gone. And as awful as the circumstances were, the Chiefs' pain is no less real. Sometimes, we grieve for monsters, too.