There are good reasons to dislike crummy players — they're crummy, that's usually reason enough. But sometimes you just can't stand a player for reasons having nothing to do with his on-field performance. Sometimes it's irrational.

For eight years, Cubs fans grew to hate Jim Edmonds as the All-Star center fielder for the arch-rival Cardinals. Edmonds made circus catches in the outfield, hit a ton against the Cubs (.270/.392/.538 with 32 home runs in 452 career at-bats), and sneered his way around the bases, so much so that Carlos Zambrano almost instigated a brawl by throwing at him during a key 2003 series. 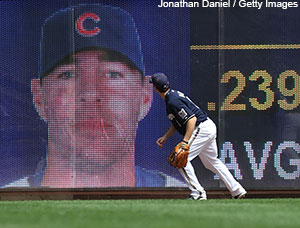 And then the Cubs picked him up in May 2008 after he was let go by the San Diego Padres.

I was one of those yelling the loudest. Edmonds was nearly 38 years old and appeared to be done after hitting .178/.265/.233 for the Padres in 90 at-bats. Some Cubs fans even said they'd never root for him because he was once a Cardinal.

But Edmonds had been slowed by an ankle injury which was just beginning to heal when San Diego let him go. For the Cubs, Edmonds smashed 19 home runs in 250 at-bats, hit .256/.369/.568, played a solid center field, and was a model citizen. Even the most Cardinal-hating Cubs fan was brought around to cheer for him by season's end.

Strange bedfellows indeed: The Cubs won 97 games with Edmonds in center field, their most in 63 years. When they declined to re-sign him as a free agent after the season, they likewise declined to 83 wins in 2009. Maybe they should have kept the good karma.

Reds fans have heaped scorn on at least a lineup's worth of slap-hitters, lead-off players, and aging veterans favored by Dusty Baker over the past few years. But most players that Reds' fans tend to hate are somehow deficient on the field — and some of that vitriol is directed by proxy at Baker. 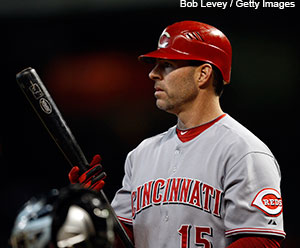 Choosing a player who drew my ire for reasons unrelated to baseball performance is a difficult task, so I think I'll have to cop out and completely dodge the question by saying Jim Edmonds.

Edmonds only played for the Reds at the very tail end of 2010 (before ending his career on a home-run-trot-induced injury). He was a really good player over his career, and he didn't hurt the Reds, other than missing the playoff roster. But I'm still kind of annoyed by him, all out of proportion with his tenure or talent.

It may be stretching the limits of "irrationally," but I'm not sure any player in Brewers history was more hated by the team's fans than Gary Sheffield. Some might not remember that Sheffield, who is better known for his time with the Marlins, Dodgers, and Yankees, started his career in Milwaukee. While with the Brewers, he didn't give much indication that he would become the prodigious hitter he eventually did, hitting .259/.319/.376 over parts of four seasons, including a .771 OPS in 125 games in 1990. But he was young and improving, and he was supposed to develop into a key contributor to the Brewers for years to come. 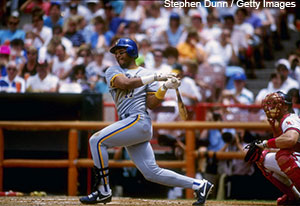 Of course, it was Sheffield's off-the-field act that left so many Wisconsinites with a bitter taste in their mouths. Sheffield was injury-prone but, beyond that, he absolutely hated the team for which he played. Sheffield, upset about being kept at third base while the white Bill Spiers played shortstop, went so far as to call the Brewers organization "racist" and the City of Milwaukee and their team "hell." Later, he would admit to purposely playing poorly while in Milwaukee. Sheffield was traded to the Padres following an injury-marred 1991 season and suddenly became a hitting machine. In return, the Brewers got the underwhelming package of Ricky Bones, Matt Miekse, and Jose Valentin. So, yeah, this might not be quite so irrational.

It's been a long time since I disliked a player irrationally, if only because there are usually enough reasons to be rationally frustrated by your favorite team to go around. When I was younger, though, and a little more hateful, I couldn't stand Tino Martinez well before he turned out to be a below-average first baseman. 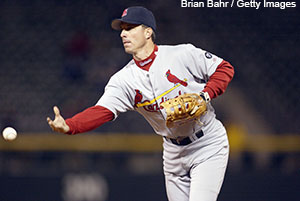 What I couldn't deal with wasn't how he played, or how he acted, or even his go-to grounder to second base; it was the way the Cardinals' broadcasters talked about him. In that sense, it was rational: I knew that 140 times a year, for three hours at a time, I was going to have to listen to an unceasing series of paeans to Tino Martinez's Winning Attitude, Noble Spirit, Team-First Play, and Sexy Facial Features.

The Pirates have had so many players worthy of rational disdain that it's tricky to identify one who got it but didn't deserve it. Personally, I'll take Jack Wilson, who bothered me because other Pirates fans loved his hustling defense, ignoring his frequently awful hitting. 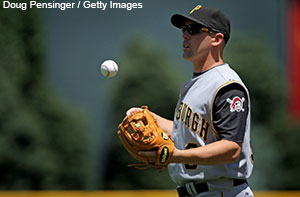 During Wilson's heyday, good advanced statistics to measure defense weren't freely available, but as a clearer picture began to emerge, it turned out that most fans' evaluations of his defense — or, more specifically, its importance — were dead right. Wilson was one of the better defensive shortstops of the aughts, and in those rare seasons when he hit at all, he was tremendously valuable. Sorry, Jack.

The first guy, chronologically, who comes to mind as a target of irrational Astros fan hatred is Derek Bell. Even before "Operation Shutdown," Bell was generally flaky in the outfield and drew a ton of my ire as a result. I was absolutely delighted that time he threw the ball into the Astrodome stands after the second out, because it gave me something else to complain about. 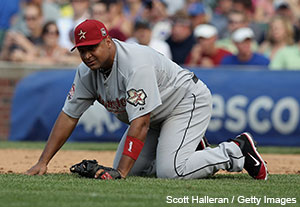 But the player who takes the cake here is easily Carlos Lee. Lee was a decent player for a couple of seasons before his production quickly went downhill, but even before that his contract made him instantly disliked by Astros fans. It was too much money and too many years and, perhaps more importantly, he wasn't Carlos Beltran, whom Houston had tried and failed to sign two winters earlier. Oh, and he also played a corner outfield spot without being an elite, elite hitter.

And oh, boy, did the fan hate grow up around Lee after his play started declining. He was a terrible defender in left field and was a bad base runner. There were absolutely no redeeming qualities to him after he stopped hitting home runs, but he was still so overpaid and there was no way he was leaving the team until the contract was up.

After a while, I was so tired of coming up with fake trade scenarios for Lee that I just accepted he'd be an Astro forever. It was like Stockholm Syndrome but with a bad contract and a worse player. I'm still partially convinced that Lee will be named the next Astros manager and will plug himself in as a pinch hitter every now and then just to annoy me.