The Seismograph: So you want to quit your football team?

Many of us have, at one point, declared, "I am done with this team." Do we really mean it? Let's take a look at some fans and see who stayed away, and who came crawling back.

Share All sharing options for: The Seismograph: So you want to quit your football team?

I have never quit a sports team. For the sake of self-preservation I've scaled back my degree of allegiance, watched fewer games, et cetera, but I've never planted a stake in the ground and announced that I was QUITTING THIS TEAM FOREVER AND EVER NEVER WATCHING THEM AGAIN I'M DONE WITH THIS TEAM EVER FOREVER.

Some of us have. In fact, I've looked through comments sections of team blogs across the SB Nation network, and I've found 14 football fans who have announced their loss of testimony since September. I didn't count those who simply said, "I'm sick of this," or, "I don't know how much more of this team I can watch." I only counted commenters who said, in no uncertain terms, "I am done watching this team," or, "I am done watching this team until ______."

This was my question: did these folks really mean it? Did they actually stop watching, or have they stuck to their guns? Well, there's no way of knowing for sure that they haven't kept watching, but it's easy to look at their more recent activity and see whether they've commented on games in game threads.

Of those 14, I caught six red-handed. Let's first review the exit comments of the eight who, to the best of my knowledge, remained true to their word.

I am done fo 2012. This is not pro football. I will not watch another game this year. So sad

- Chiefs fan at Arrowhead Pride, during a 38-10 loss to the Buccaneers that dropped the Chiefs to 1-5 on the season. Has not posted in a game thread since. (Note: of the 14 fans I found, six were Chiefs fans.)

IM OVER THIS TEAM. I cannot watch this shit anymore

- Chiefs fan at Arrowhead Pride, during the Chiefs' 35-17 loss to the Bills in Week 2. Has not posted in a game thread since.

I will not watch another KC game until Matt Cassel is taken off the start position.

- Another Chiefs fan at Arrowhead Pride during the Bills game. Since then, Brady Quinn has started three games over Matt Cassel. Regardless, this commenter has not returned to a game thread.

As it stands now, I might as well find something else to do except get heartbroken by this team on sundays.

- Eagles fan at Bleeding Green Nation during a 31-6 loss to the Redskins that sent the team to 3-7 on the year. Did not return to BGN's game thread the following week.

I am fking tired of rooting for this team, especially the last ten years. Al really fked this team up the last several years. You can defend him all you want but the record speaks for itself. I'm done.

- Raiders fan at Silver and Black Pride, while watching the Raiders lose to the Broncos, 37-6. This loss dropped Oakland to 1-3. Has not posted a single comment since.

- Jaguars fan at Big Cat Country, as the Jags were routed by the Bears, 41-3, and fell to 1-4 on the season. Has not participated in a game thread since.

I'm not going to watch NFL football next season. Done with being a Jets fan.

- Jets fan at Gang Green Nation, as the Jets fell to the Dolphins, 30-9, and sunk to 3-5. Left three more comments during the game: "We won't score." "Fuck Kyle Wilson." "Fuck Rex Ryan too." Has not commented since.

I am officially out until hoops.

- Colorado fan at The Ralphie Report during a 69-14 loss to Fresno State. Since then, this fan has appeared in basketball game threads, but not a single football game thread.

It should be noted that none of the above fans were new or casual commenters. Each had commented at least 100 times, and some had left many more. Again, it's impossible to say whether they really stopped watching, but it was evident that participation in game threads was a fixture of their game-watching experience. They may well have actually quit watching.

Now for the fun part. Let's take a look at three fans-turned-not-fans-turned-fans, whose names I'm withholding because I'm not trying to give anyone the business over this.

EXHIBIT A: THE CONDITIONAL THREAT.

Allegiance: Kansas City Chiefs.
Date of resignation: October 14th.
Background: Despite high expectations, the Chiefs had started 1-4 on the season, and three of those losses came by three-score margins. Quarterback Matt Cassel couldn't accomplish much out of garbage time, and the fan base was turning against him. 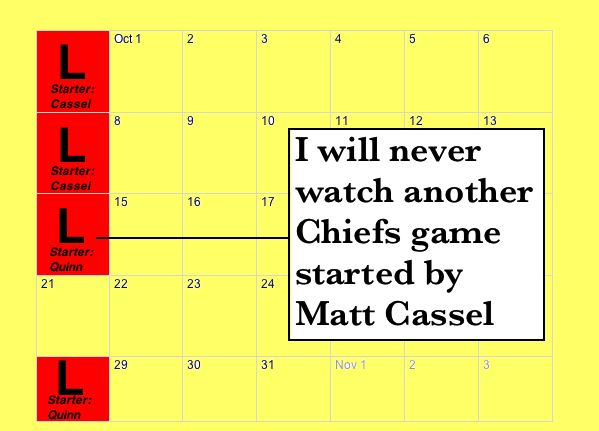 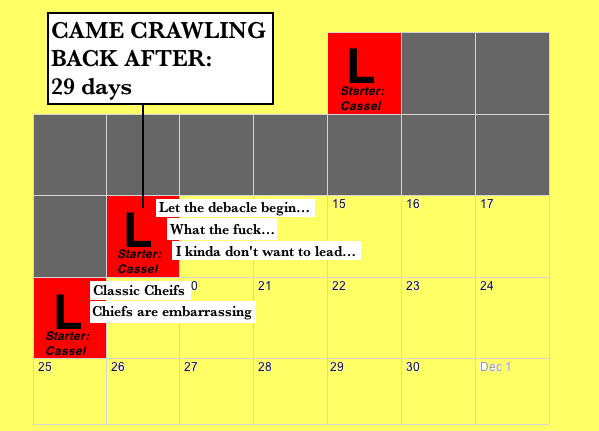 The day this fan pledged not to watch another Cassel-started game was also the day Brady Quinn started in his place. Quinn, to the surprise of nobody who has watched him play in the NFL, wasn't really any better. True to his word, when Cassel started Nov. 1, Exhibit A was completely absent from Arrowhead Pride's game thread.

He failed his second test. On Nov. 12, he crept back into AP's game thread with a simple, "Let the debacle begin." The Chiefs actually did manage to hold a regulation-time lead for the first time all season (!), but eventually fell to the Steelers, 16-13. For reasons unknown, he stuck around the next week to watch the Chiefs get embarrassed by the Bengals, 28-6. Classic Cheifs [sic] indeed, pal. You said it, pal.

Allegiance: Tennessee football.
Date of resignation: October 13th.
Background: Tennessee had managed to pop into the rankings before losing to three ranked opponents, effectively dashing the Vols' 2012 ambitions. Head coach Derek Dooley was on the hot seat (and would eventually be fired a month later). Exhibit B announced his exit during a 31-41 loss to Mississippi State. 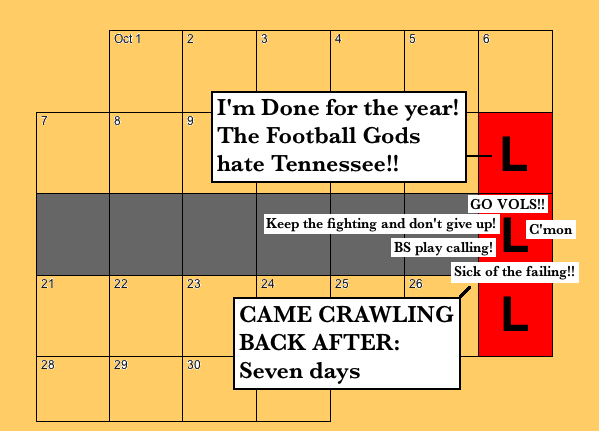 Ah God, this is precious. "Sick of the failing!" he says. "Don't give up!" he says. It's as though his decision to quit 2012 Tennessee football never happened, because in the end, he didn't miss a single game. Not the 44-13 clubbing at the hands of Alabama, nor the heartbreaking 38-35 loss to South Carolina, nor the eventual 41-18 defeat at Vanderbilt.

He left because it was bad, and returned just in time for it to get even worse. But that's just how college ball works, I guess. A school is, more often than not, a piece of a fan's sociopolitical, geographical, and economic identity. Fans might claim to give that up. I'm not so sure that any of them actually do, or can.

Allegiance: Kansas City Chiefs.
Date of resignation: September 16th.
Background: This gentleman, referred to herein as Exhibit C, declared his abstinence from Chiefs football in the middle of Week 2. The Chiefs were in the third quarter of a 35-17 loss to the Bills, and Exhibit C decided he had seen enough. At about 3:11 p.m., he announced that he had turned the TV off. Fourteen minutes later, he declared that he just couldn't do it anymore. 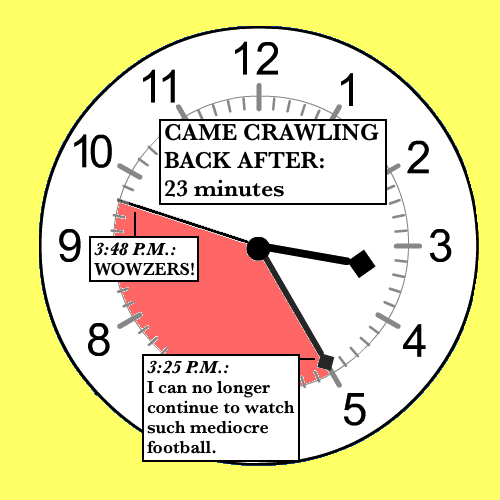 Football fandom is a lifestyle in a way that, for most people, other sports are not. My fall Sundays are governed by football. In a given week, I know when I'll be working, roughly when I'll be sleeping, and when I'll be watching football. Those are the three constants. That would be scary if I cared.

Point being, if I tried to Quit Football, I'd probably be Exhibit C. I couldn't stay away. To term it as a "drug" or "addiction" or something is to sell it short; it's a part of us.

Twenty-three minutes, though. What do you think he did with those 23 minutes? That's a 10-minute run on the treadmill right there. Gotta allot the other 13 minutes toward aimlessly staggering around the house and weeping.