The Fast and the Dubious: Mavericks, Bucks playing up-tempo to no avail

We typically associate up-tempo basketball with good offensive basketball. The Mavericks and Bucks are among the teams reminding us that pace and quality of largely uncorrelated.

Share All sharing options for: The Fast and the Dubious: Mavericks, Bucks playing up-tempo to no avail

As if you needed a reminder that a higher pace and efficient basketball aren't always married, just turn your attention to the 2012-13 Dallas Mavericks and Milwaukee Bucks.

As the map below shows, both are in the top half of the league in pace factor, which is an imperfect but easily calculated measure of how many possessions a team gets through in an average 48-minute game. But both of these teams and six others also sit below the league average mark for offensive efficiency. They are the Fast and the Dubious. 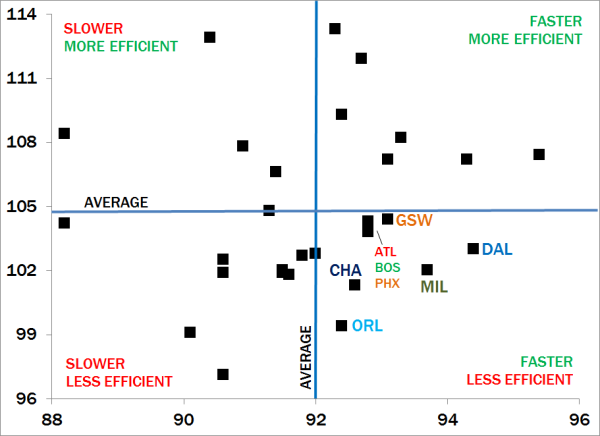 The Mavericks have played at the No. 2 pace this season, behind only Houston. But Dallas has the No. 18 offense in the league. Milwaukee is No. 4 in pace and No. 22 in offensive efficiency. You'd suspect that the Mavericks will slow down now that Darren Collison's role has been reduced, and considering that Dirk Nowitzki - an incredible halfcourt scorer - is coming back soon, the offensive efficiency should fire up. The Bucks are harder to figure out. Their higher pace isn't due to abnormally low offensive rebounding rates or high turnover rates, but because they actually play quickly. It's unfortunate, but the team's two major offensive weapons, Brandon Jennings and Monta Ellis, are just not very efficient.

That's a bad mix. Playing up-tempo creates more possessions in a game. The more possessions that are in a game, the more likely it is that streaks will even out, play will regress to the mean and the expected will happen. It's similar to short playoff series vs. long ones: you were much more likely to have upsets in a one-game playoff or a best-of-five series than a best-of-seven. That's why a strategy of bad teams is to "shrink" the game; fewer possessions increases the chance for an upset.

The more possessions the Bucks have on offense, the more likely their offense will be poor overall for the game...especially if Ellis and Jennings are playing lots of minutes. They are playing 35 and 36 minutes per game, respectively. The next highest Buck is at 26 (Mike Dunleavy). Jennings' individual offensive rating is 103 (two points below league average), owing completely to poor shooting (a True Shooting percentage of .498). Ellis is much worse at .472 and an individual offensive rating of 97. Basically, for every shot the average NBA player takes, you expect to get 1.05 points out of it. For every shot Ellis takes, the Bucks are getting 0.94 points out of it. Tease that out to 20 shots (a normal Ellis game), and that's 21 points for the average scorer and 18.8 for Ellis. It ain't good.

So in Milwaukee, the speed of play and the low efficiency are related because the players pushing the tempo are inefficient. Ellis is a huge challenge for the Bucks and whatever team he ends up with next season (if not the Bucks). He's like the best-looking iffy player ever. The things he can do are stunning to watch. And it's all bad in the box score, at least lately. He's a real enigma.

As for the Mavericks: things will change when Dirk - in whatever form - returns. Both things will probably change: the Mavericks will likely slow down, and they'll be more efficient. The other teams aren't really racing out (though I struggle to understand how the Magic play up-tempo given their roster), and this is more a fact of being than the solution to a great riddle. But the Bucks need to figure out how to get better shots with their flying backcourt.