The rate of 50-point games by the league's best scorers has fallen precipitously in the last few years. Why? How can we change this awful reality?

Share All sharing options for: Searching for the NBA's big game hunters in the post-Kobe Bryant era

There's something extra magical about a 50-point night in the NBA. When the superstars do it, it's a celebration of true greatness and a reminder that immortality awaits. When the ... less renowned players do it, it's a buzz bomb that hard wires names into memory. Where were you when you heard Tony Delk dropped 50 on the Kings? 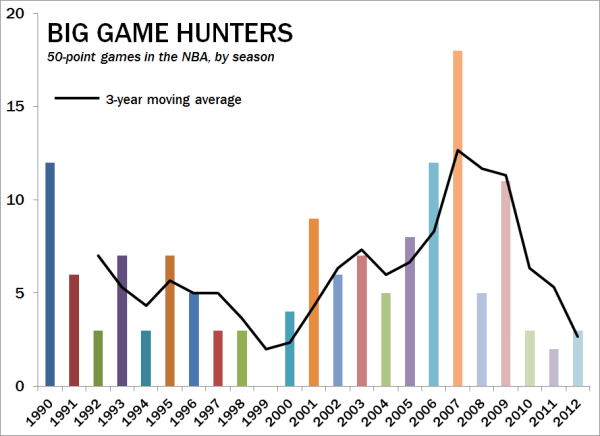 The three-year moving average following last season is at its lowest point in more than a decade. Note that, yes, the 2012 and 1999 seasons were shortened due to lockouts. But the NBA missed only 16 games last season, and still had more 50-point nights (three) than in 2010-11 (two) and the same number as in 2009-10. This has been solidifying over the past three seasons, full or otherwise.

We're off to a slow start this season, as well, with zero 50-point nights to date and just four 40-point games. Kobe Bryant, who this week became the youngest player to hit the 30,000-point milestone, has two of them. He, through a few tweeted thoughts on Kobe's scoring exploits of the past by Noam Schiller, actually got this topic cranking in my head. 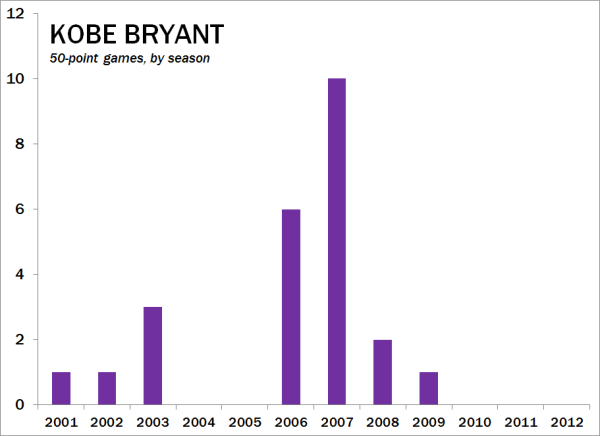 Kobe Bryant, the most willing provider of huge scoring nights in this era, hasn't dropped 50 since February 2, 2009, almost four years ago. It's over. Kobe's big game era is over. (Man, that 2007 run was something else. Remember that three of those were actually 60-point games. The team stunk, but Lord was Kobe something to watch.)

The new breed of scorers just doesn't explode like Kobe. Kevin Durant has three straight scoring titles ... and one career 50-point game. Carmelo Anthony has been his team's top option since 2003-04, and has largely played for up-tempo coaches. He has two career 50-point games. LeBron has nine on his resumé, but just one since signing with Miami. And the non-stars aren't busting out much, either: since the start of the 2008-09 season, just four players who have never been All-Stars -- Jamal Crawford, Kevin Martin, Brandon Jennings and Andre Miller -- have popped off for a 50-point game.

So why don't we see more 50-point games?

* The league numbers are driven by a select few. Even in the seasons with the highest frequency of 50-point games, a few players are responsible. Take 2006-07, the season with the most 50-point games in the past two decades. Of those 18 big games, Kobe had 10 and Gilbert Arenas had three. A number of other big scorers (LeBron, 'Melo, Iverson, Tracy McGrady) were in the league, but that season's huge numbers were driven by Kobe. When a cottage industry depends on basically one proprietor to provide the service, and that provider cuts back, the cottage industry withers. Without Kobe providing huge nights, there's really no one else to fill that void.

* Today's superstars have help. Kobe's biggest seasons came in 2006 and 2007 ... when he had little if any scoring help. Age may be playing a role in Kobe's lack of huge games now, but that wasn't likely the case in his MVP 2008 season or in NBA Finals seasons 2009 or 2010. But what did have an effect is that he got Pau Gasol, another strong scorer to take pressure off. He didn't need to score 50 to give the Lakers a chance. So he didn't. It's hard to score 50, you know. As noted above, LeBron had eight 50-point games in scoring-starved Cleveland and has one in stacked Miami.

* Big men almost never drop 50 these days. Since the 2005-06 season, two big men have had 50-point games: Kevin Love and Dirk Nowitzki. Earlier in the decade, you had guys like Antawn Jamison, Jermaine O'Neal, Tim Duncan, Chris Webber, Jamal Mashburn (!), Shaq and Cliff Robinson (!!) doing it every once in a while. In the '90s, Hakeem Olajuwon, Karl Malone, David Robinson, Alonzo Mourning, Cedric Ceballos and Tom Chambers were tossing up 50-point games. Charles Smith had one! You're not getting any Charles Smith games these days. Part of it is the lack of Admiralian big men who score score score in the paint. Part of it -- related to that big man deficit -- is that it has fully transformed into a perimeter game due to the rise of the three-pointer and the burgeoning stock of quality point guards.

* The well-rounded superstar is the highest ideal. During the Kobe era, being well-rounded was perhaps not as valued as being incredible at what you do. I imagine Durant doing the Kobe-McGrady-Vince Carter era ... and I imagine him taking many more shots, and maybe having a 60-point game under his belt. These days, we opine about completionism in our stars -- LeBron and the post game, Durant and the assists. Coaches do, too, and so we have better players. But fewer big game scorers. It's a net good with a drag on something we enjoy.

Are there any current players who could signal a return to prominence for the 50-point game? Durant is an obvious choice, but it'll take an injury to or trade of Russell Westbrook to make that happen. And vice versa: Westbrook could have a few big nights if Durant misses any time. If Dwyane Wade continues to age more quickly than a Real Housewife of Boca Raton, LeBron's huge nights could return. Point guards rarely hit these scoring levels -- Westbrook, Derrick Rose and Chris Paul have zero 50-point games, while Deron Williams, Tony Parker, Old Man Miller and Jennings have one each -- but Kyrie Irving or Stephen Curry could offer a few. If you're looking for a big man to fill up a hoop, DeMarcus Cousins is young, not shy and prone to exploiting matchups.

But it looks like we'll be waiting on another Kobe to bring the 50-point game back. Keep dreamin', kids.