NBA scores: How the Knicks rained threes on the Heat

How did the New York Knicks score 112 points on the Miami Heat? We break down some of their best offensive sets from a blowout victory on Thursday night.

Share All sharing options for: NBA scores: How the Knicks rained threes on the Heat

Watching the Knicks last night -- and really, all season -- has been a weird, out-of-body experience. They're coached by Mike Woodson, who enabled the most ball-stopping offense of the last several years when he was the head man for the Atlanta Hawks, and yet, they're winning by spreading the floor, moving the ball and shredding teams from downtown. If we didn't know any better, this almost looks like a Mike D'Antoni team.

Even without Carmelo Anthony, that floor spacing and hot three-point shooting terrorized the Miami Heat on Thursday night. There are some obvious caveats here before we jump to any conclusions. The Heat seem to be coasting right now, and their three-point defense is very badly broken. The Knicks, particularly Raymond Felton, also hit some difficult shots they won't normally make. But we've now been treated to a large enough sample to realize that the Knicks' offensive proficiency is not an accident.

Spacing, in particular, has been spectacular. Take a look at this set near the end of the third quarter. 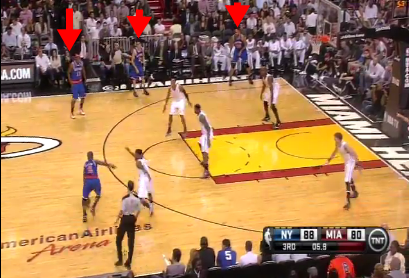 Here, you have three shooters properly spaced on the left side. Felton, who has the ball, eventually draws one of Miami's help defenders stationed at the free-throw line. Watch the chain reaction that results. 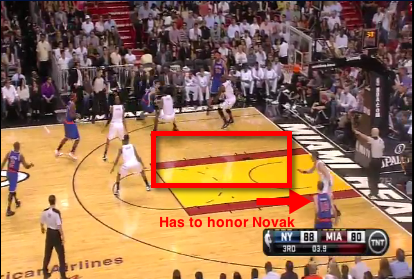 Felton eventually passes to Pablo Prigioni, but because the Heat have to honor all these shooters, Prigioni can easily shot fake, drive by his initial man and get to the rim. Mike Miller has to honor Steve Novak in the left corner, and Prigioni gets a rare layup. Even someone like him can get to the basket when nobody is meeting him there.

The Knicks often like to station multiple shooters on the strong side of the floor to open up lanes on the opposite sides. But they also maintain great spacing in transition. Their wings run to the three-point line rather than to the basket, which opens up plays like this one. 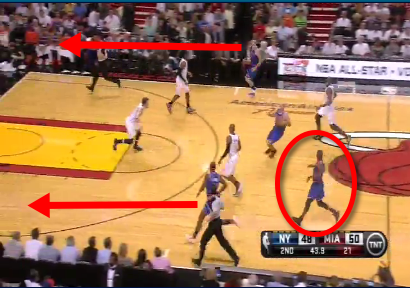 Jason Kidd has the ball, and Ronnie Brewer and Steve Novak are running to the corners. Felton is circled because he's going to stop running once he reaches the three-point line. This opens up a series of passes that allow the Knicks to get a wide-open look even though there are four Heat players back. 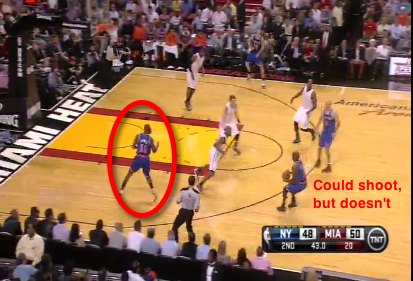 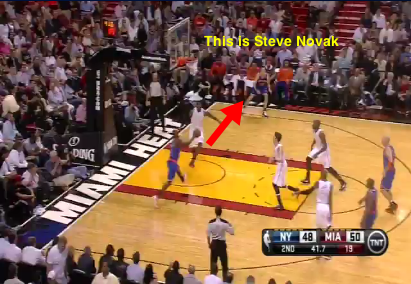 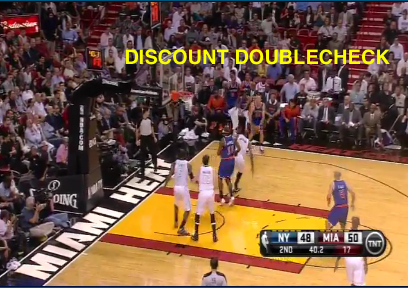 In those ways, Woodson's Knicks look a lot like D'Antoni's Knicks. But Woodson also likes to sprinkle in some intricate offensive sets that he never really displayed in Atlanta. One of his favorite is a triple ball screen involving his point guard, two shooters and his big man. This look forces defenders to scramble to cover so many men at once and usually opens up a shot for somebody. On this play early in the fourth quarter, it got Rasheed Wallace a layup. 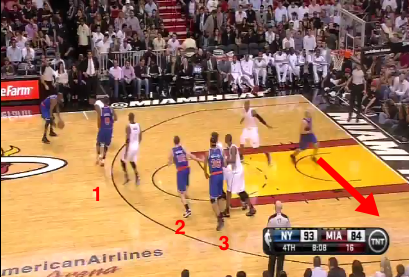 As Smith, Novak and Wallace set the triple ball screen, they all run to their spots. Smith and Novak continue to the three-point line, while Wallace rolls down the lane. Meanwhile, as this is all happening, Kidd is sprinting to the right corner, occupying Ray Allen's attention. Here's what Felton sees once all three screens are completed. 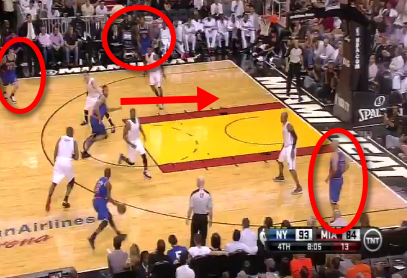 Chris Bosh has come out hard to hedge on Felton, but Felton has found a way to turn the corner. Once that happens, the Heat simply have to deal with too many perimeter shooters to stop Wallace from rolling right down the open lane for a layup. 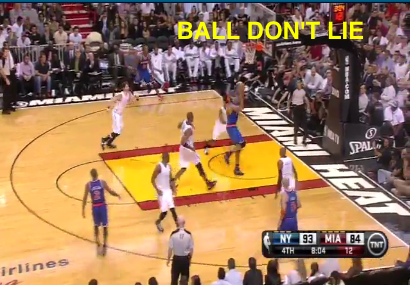 That the Knicks were able to generate so many easy looks without Anthony in the game speaks to their ability to space the floor so well. That's why it will be very interesting to see how things change once Amar'e Stoudemire comes back. Stoudemire has range extending out to 18 feet, but he is not the three-point threat that Novak or even Anthony playing power forward is. Woodson will have his work cut out for him here. He must figure out a way to integrate Stoudemire into the Knicks' offense without sacrificing too much of the amazing spacing that has carried New York to a 14-4 start.

But that day isn't here yet. For now, enjoy the irony of a Knicks team enjoying its best spacing in years after letting go of D'Antoni.

Phoenix is a mess right now. The loss of Channing Frye, combined with the Michael Beasley experiment, has mucked up their spacing and made it difficult for them to play with a lead. Once again, their bench rallied late to make this a game, but a tough jumper by O.J. Mayo put things away for Dallas late. Now, the Suns are looking at yet another lineup change. The Suns need to figure out their rotation, and fast.

Here's more analysis of the Knicks' win over the Heat from Ben Golliver.