Led by his team of nine dogs, Dallas Seavey made his way down a crowded Front Street in Nome, Alaska, to become the champion of the 2012 Iditarod, crossing under the famous "burled arch" -- and the banner reading "End of Iditarod Sled Dog Race" -- some 10 days after he left the ceremonial starter in Anchorage. Seavey, just 25, becomes the youngest champion in the history of the race, which celebrated its 40th running this year.

Ally Zirkle, who led for much of the first half of the race, was expected to finish second, followed closely by Ramey Smyth, who came all the way back from 30th place to finish third. Zirkle left Safety, the final checkpoint before Nome, 69 minutes after Seavey.

Seavey, son of 2004 winner Mitch Seavey, and grandson of an Iditarod pioneer, took control of the race as it made its way toward the Norton Sound, relying on his strategy he employed through the trail -- rest early and often, and use that stored speed to run away from everyone over the final few days, and that's exactly what he did. Seavey was even frequently seen running alongside his sled, allowing his dogs to push even faster. His athletic background certainly helped -- Seavey is a former state high school wrestling champion at 130 pounds and a former national champion at 125 pounds. 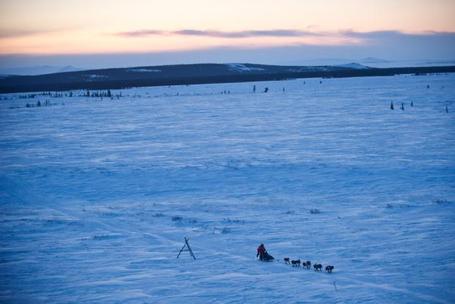