It's not uncommon for baseball players to perform better at home than on the road. But Angel Stadium might, under certain circumstances, give Jered Weaver a particular edge.

Like any good Mariners fan, I read a lot of stuff that's written about the Mariners. Most of it I don't need to have read, since little of it tells me anything I didn't already know, but that possibility that there's something in there keeps me reading. Tuesday, I read an article about the Mariners written by Peter Gammons. I'm not always wild about national journalists, but I find that Gammons is often worth my time. In columns, just as on Twitter, except for different reasons.

Gammons wrote about Eric Wedge and the Mariners' coming wave of young pitching talent. Nothing super new. But then after that section, he tucked in something interesting. Quote:

A number of Mariners players held their own game: Which of the Angels' starters would you least like to face?

The poll ended with Jerome Williams and Jered Weaver in a dead heat.

"Except," added another player, "when it's daylight in Anaheim, and Weaver is throwing out of the rockpile background."

This caught my attention.

This is about Jered Weaver allegedly benefiting from the rockpile background during the day. In case you aren't familiar with Angel Stadium, here's an image, from this source: 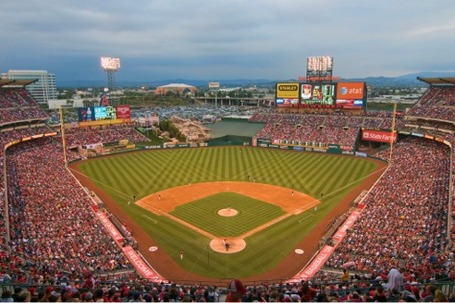 Intuitively, we can see how that could be a distraction. The rockpile is off-center, but not by a lot. It's somewhat lightly colored, and presumably reflective to some degree. Weaver is a very lanky guy with long arms and an over-the-top delivery. 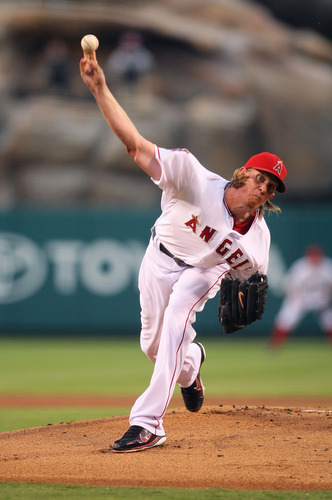 But we can't investigate by intuition. I went through Weaver's career game logs and identified 16 home starts made in the day time. One was at 3:30pm, and all the others were at or around 1:00pm. I assumed that the weather was always nice, the sun always bright.

That left 68 other home starts, almost all of which started around 7:00pm. The sample sizes here are different, but I think we have enough to make a comparison. When I put the numbers next to each other, my eyes opened wide. The numbers back up the anonymous Mariners player, and then some.

Now, remember: 16 starts, and 113 innings. We have a pretty small sample when it comes to Jered Weaver home matinees. But the difference here is striking. His ERA in the day is half what it is at night. More meaningfully, his home runs are down, and his strikeouts are way up. The strikeout-rate increase is supported by a contact-rate decrease. What these numbers strongly suggest is that, indeed, batters have a hard time picking up the ball against Jered Weaver when the afternoon sun is shining and the rockpile looms behind him.

Because of the rockpile's off-center location, I'd guess that lefties have a harder time with it than righties. While lefties make up a minority of the baseball population, Weaver has faced 52 percent lefties for his career. If the rockpile helps to neutralize them during the day, Weaver's ERA should plummet.

In conclusion, we have nothing conclusive. It's possible this is all just sample-size variation. It's also possible that other pitchers show similar patterns, although at first glance, career Angel Ervin Santana does not. This is something that could stand to be studied more.

But while we don't have a conclusion, we do have compelling evidence. It looks like Jered Weaver benefits to a significant degree from that rockpile in the afternoon. This isn't me asserting that he's overrated or trying to knock him down a peg - that doesn't interest me. I do think it was probably a good idea, though, for him to re-sign with the Angels for five years. He makes the Angels better, and, in a way, the Angels make him better, too.