Should You Fire Your Coach Midseason? A Statistical Breakdown

Pro sports teams aren't afraid to fire their coaches or managers in the middle of the season. Often times, this is simply done to send a message. But does it actually make the team better? Here, we look at the stats and find out.

Share All sharing options for: Should You Fire Your Coach Midseason? A Statistical Breakdown

Politicians are voted out of office, CEOs are booted out at the behest of nervous shareholders, and the manager of Gadzooks gets demoted after failing to move the SNAPE KILLS TWILIGHT T-shirts or whatever, so it shouldn't surprise us that head coaches of pro sports teams get fired on a regular basis.

Isn't this very nature of leadership strange, though? Your coach is your unquestioned superior. He decides what the team looks like, who starts, who sits, and which plays are run. He is the Supreme Leader. And yet, his job is far less secure than yours, and it's likely that you will remain on the team longer than he will -- even if you and your teammates carry more of the blame for losing than he does.

Sometimes, executive management grows so impatient that it fires a coach in the middle of a season. At a base level, I've always found this difficult to understand, because: a) clearly, if management is making a personnel change at head coach, it believes the head coach position to be important, and b) in most cases, management is hastily filling the role with an offensive coordinator or third base coach who has never served in such a role.

I understand that the decision to fire a coach mid-season is often a public relations move, made to broadcast the message to players and fans that executive management is not satisfied with losing. But to treat this coach, who manages the team both strategically and emotionally, as a pawn in a PR game? It's weird.

I got curious, so I decided to try and find out whether, from a win/loss perspective, firing a head coach halfway through the season is a good idea. First, I counted up all the mid-season firings this century. 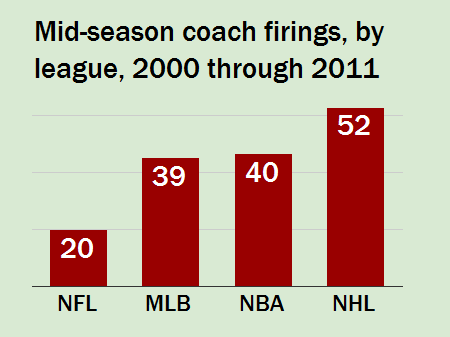 I was careful not to count coaches who we know voluntarily resigned, such as Lou Piniella and Rudy Tomjanovich. Of course, sometimes "resigned" really means "forced out," so there were a few gray areas to sort out -- for example, I decided to include Stan Van Gundy, who technically resigned from the Heat, because some in the know suggest that he was indeed forced out by Pat Riley.

Here's a sport-by-sport rundown. I looked at, among other things, how the teams' winning percentages improved or declined after their coaches were fired. Most were a wash, as the numbers didn't vary in a significant way, or the change was made too early or late in the season for the numbers to say anything meaningful. A few, though, deviated enough for me to be able to call them "good firings" or "bad firings" strictly from an immediate win-loss perspective. 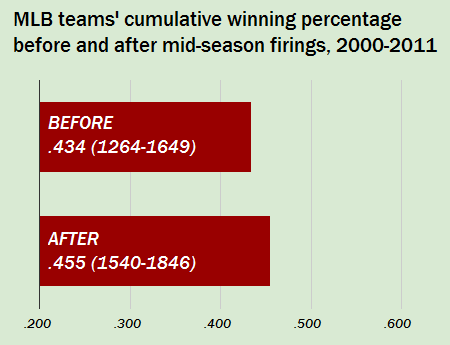 Baseball teams have, on the whole, benefited from their decisions to can their coaches mid-season. The difference in winning percentage is only .021, which, over the course of an entire season, means about 3.4 games. If the team's making the switch halfway through the season, of course, that's only one or two games. If you're in a tight playoff race, that's huge. If you're sitting around .450, like most of these teams were, that isn't nearly as significant.

So usually, a mid-season firing doesn't affect a team negatively in the win-loss department, and the team gets to make a PR statement. Not bad.

Best mid-season firing: After Clint Hurdle staggered to an 18-28 start in 2009, the Rockies dumped him in favor of Jim Tracy, who went 74-42 and led them to the playoffs.

Worst mid-season firing: Jimy Williams had his 2001 Red Sox well over .500, but thanks to an August slump and a rough relationship with general manager Dan Duquette, Boston fired him and replaced him with Joe Kerrigan. After inheriting a 65-53 record, Kerrigan's Red Sox went 17-26 and fell out of the playoff race. 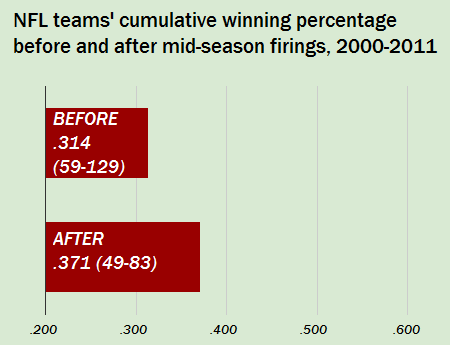 Mid-season firings are relatively uncommon in the NFL. If an NFL team fires its head coach, it's a pretty sure bet that it wasn't going to the playoffs anyway, but on average, teams did win just a little bit more often. That might mean a difference between 4-12 and 6-10. That difference matters to fans.

Best mid-season firing: Wade Phillips enjoyed three winning seasons in Dallas, but the Cowboys started 1-7 in his fourth, and the Cowboys had no real choice but to fire him. Jason Garrett took the reins and went 5-3 the rest of the way to salvage some measure of respect for the team.

Worst mid-season firing: Honestly, almost no mid-season firings I found could be described as "bad firings," because by and large, the teams finished about as badly as they started. However, in 2000, Norv Turner led the Redskins to a 6-2 start before they dropped four of their next five. At 7-6, the Redskins dropped Turner in favor of Terry Robiskie. The team dropped two of its last three games and missed the playoffs. 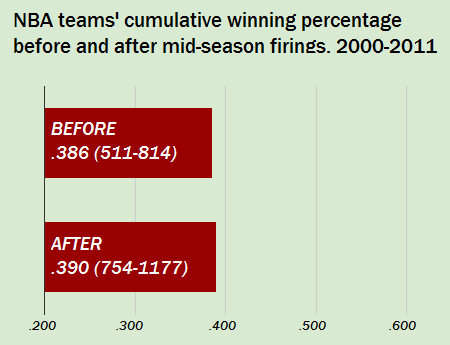 That "good firings" number is important. On the whole, as you can see, a mid-season firing has had virtually zero impact on an NBA team's win-loss record. The thing is, I did find 19 "good firings," which should indicate to you that the bad firings must have been really bad firings. In several cases, would-be playoff teams sunk like rocks as soon as their coaches were fired.

Best mid-season firing: In just two years, Jeff Bzdelik turned the Nuggets from a perennial loser into a playoff team. He started his third year with a 13-15 record, at which point he lost his job. The move probably seemed premature to some fans, especially after the team dropped 10 of its next 14 under interim coach Michael Cooper. However, the Nuggets then landed veteran coach George Karl, who led Denver to a 32-8 record the rest of the way.

Worst mid-season firing: With a 20-20 record, the 2006-07 Timberwolves were showing significant improvement, but the team fired head coach Dwane Casey in only his second season. Randy Wittman took over and the team immediately sunk in the standings, going 12-30 the rest of the way. Wittman retained the head coaching job in 2007-08 and went 22-60. Strangely enough, he managed to keep his job into the 2008-09 season, and was finally fired after a 4-15 start. 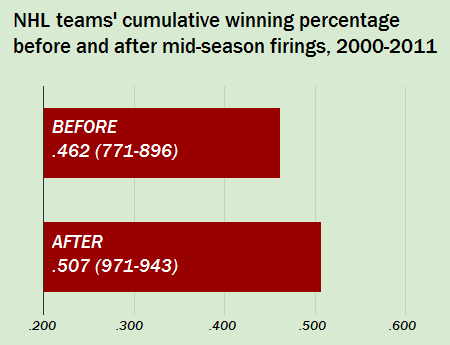 Well, dang. Look at that. NHL teams are more willing to can their coaches mid-season than those in other leagues, and as it turns out, it looks like they're better at it, too. Of the 52 teams I counted, 15 actually ended up reaching the playoffs -- far more than I can say of MLB (four teams) or the NFL (zero). Of course, that's thanks in part to the NHL's inclusive playoff format, but said format simply underscores the importance between finishing at .475 and finishing at .525.

Best mid-season firing: Through two years and change under head coach Glen Hanlon, the Capitals were cellar-dwellers, and after a 6-14-1 start to the 2007-08 season, he was fired. Bruce Boudreau took the captain's chair, led the Caps to a 37-17-7 record the rest of the way, and transformed the team into a perennial playoff contender.

Worst mid-season firing: In 2004, the Phoenix Coyotes started 20-24-15-3 under Bobby Francis, at which point they fired him in favor of Rick Bowness. The Coyotes then took a nosedive, going 2-12-3-3 the rest of the way. 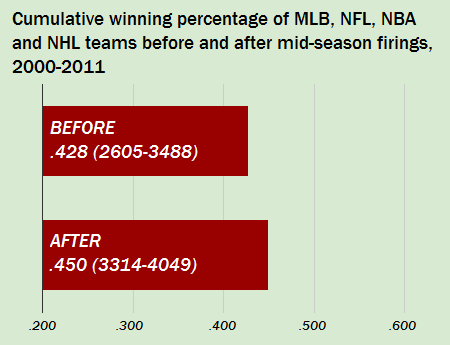 So there you go. After lumping together the numbers from every sport, we have an especially large sample size, and the data indicates that, by and large, teams are just a little better after firing a coach.

The difference between .428 and .450 almost never means anything if you're gunning for the playoffs, but it does mean something if you're trying to send a message to your players and fans, or if you're getting your affairs in order for the long-term future. There is, of course, such a thing as a terrible mid-season firing. But if you're making the decision with a level head, in terms of both short-term and long-term stability, it's probably a win-win.

So yeah, every team should fire every coach immediately. Go! NOW!