Earlier, I started this playbook series by looking at Brown Right F Short 2 Jet Flanker Drive. This was the play that Steve Mariucci of NFL Network displayed to Robert Griffin III at the scouting combine. I want to try and demonstrate what a rookie quarterback has to go through when transitioning from a college spread, to a west coast offense in the NFL. In this post, I thought I'd look a little deeper at the play Green Right Strong Slot Spider 2 Y Banana. If you watched Jon Gruden's QB Camp withAndrew Luck recently, you might be familiar with the phrase "Spider 2 Y Banana". Luck does a fantastic job explaining it (watch a quick clip here), but I thought I'd break it down a little simpler for us every day fans.

This is the kind of play the west coast offense was built around; short, high percentage passes which can take the place of running plays. So lets see what the full play looks like drawn up. 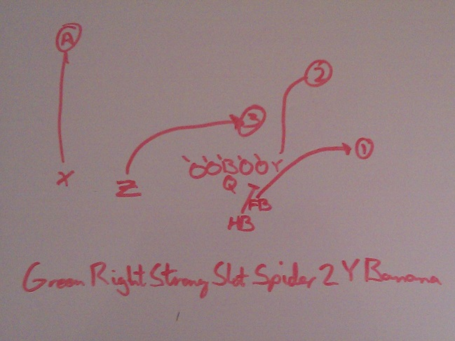 More after the jump.

This play is called from the regular or base personnel group, which contains two backs, two receivers and a tight end. The initial part of the play call is the formation. "Green Right Strong Slot" is a variation from a base "Green Right" formation. 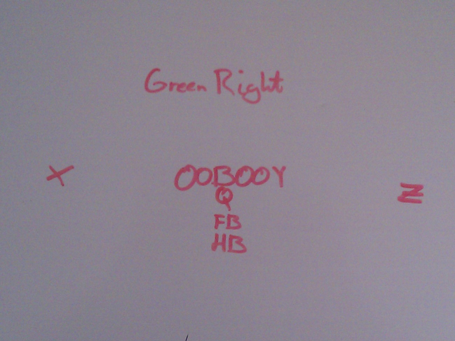 As you can see, the basic Green Right formation is quite different from the one called in the play. The 'Z' receiver is split out wide, while the fullback is not off-set. The word "Strong" in the play call changes the position of the fullback to make him off-set, as you'll see in this next picture. 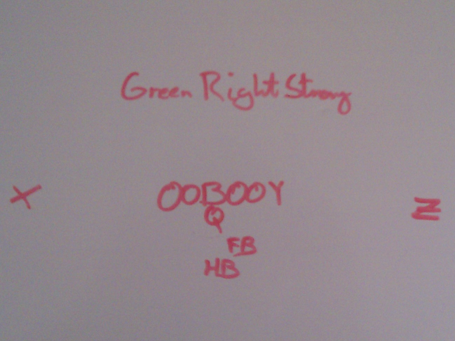 Now the fullback is off-set, we are close to the formation desired in the play call. However, there is still the issue of the Z receiver. The next word in the call is "Slot". This tells the Z receiver to line up in the slot, rather than out wide. So now the formation looks like this. 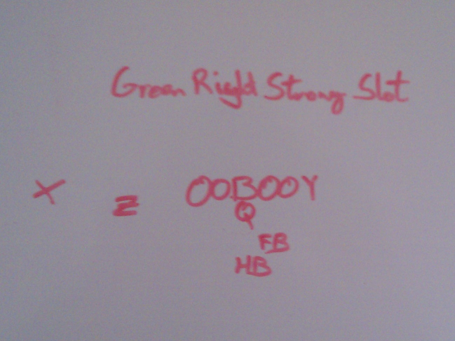 Then we have the route combination, "Y Banana". This obviously tells the Y receiver to run a route that is the shape of a banana (as you can see in the first picture). The Z receiver is going to run a shallow cross, while the X receiver is running a comeback alert route, meaning if the quarterback likes the match up, he can alert it pre-snap and make it the primary read.

But it's the backs that make this play. The off-set fullback is going to try to make the play look like a strong power run, but then slip the defender and run into the flat. The running back is going to then cut block the defender that the fullback would normally have blocked. The majority of the time, the linebacker assigned to cover the back coming out of the backfield will usually be focusing on the running back. This allows the fullback a free run into the flat, where he is wide open for an easy completion. That makes the fullback the primary read on this play. On the occasion the linebacker has read the play well, the tight end running the banana becomes the second read. But as the only intermediate route on that side of the field, he will usually have a safety over the top. So the third read is the Z receivers shallow cross, or the "under" as Luck and Gruden call it. If the fullback is covered, he leaves a gap in behind him where the Z receiver is running into, which allows for another fairly easy completion.