The new U.S. Men and Women's soccer uniforms are not by definition as bad as they could be. That nadir came in 1994 when the hypercolor dishcloth uniform appeared, scarred the eyes of the thousands watching, and then disappeared into a happy oblivion. The jerseys were also edible, and came with a free Sega Genesis game and a Jolt! Cola coupon. No one knows why, remembers why, or cares.

This year's model is after the jump. You will recognize it from America's favorite book series ever about a myopic drifter. 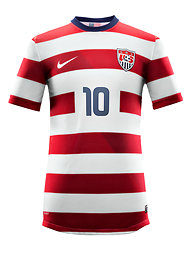 FOUND YOU, WALDO. First reaction: this is an Under Armour jersey for manorexic gondoliers who fold their shirts on the diagonal. The sash is historical enough -- a reference to the 1950 World Cup team -- but the red stripes look far too much like a latitudinal version of Paraguay's uniforms.

The nod to the Brony movement, though, is certainly novel. 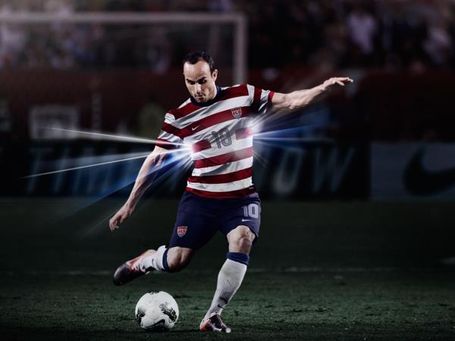 If friendship is magic, Landon Donovan is a buddy-sorcerer of astonishing powers here. Look at all that magic coming out of his rib cage: it's like he ate barbecue made of fairy dust and uranium, and then beat a gondolier unconscious and stole his clothing. Maradona was thrown out of the 1990 World Cup for that, so please consider yourself warned, Landon.

Landon's geiger-counter-shredding ribcage is merely odd. Hope Solo, in contrast, actually gets to wear a sports bra made of plutonium in this uniform. 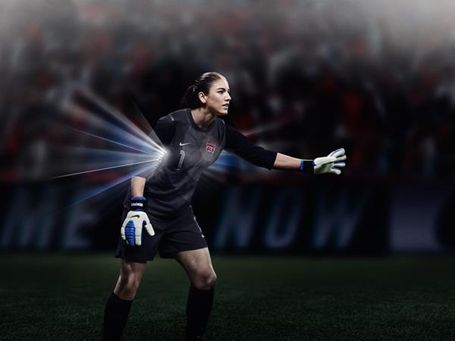 Maradona did this, too, with no ill effects in 1994. He wears one to this day. Miss Solo should be fine if Maradona is considered normal, and representative of how a typical human would react to chemical exposure. That being said, everyone involved with this uniform should probably seek medical attention immediately.