A Closer Look At Bartolo Colon Throwing Strikes And Only Strikes

Share All sharing options for: A Closer Look At Bartolo Colon Throwing Strikes And Only Strikes

Wednesday made for something of an unbelievable night of Major League Baseball. I watched Chone Figgins hit a home run, and then a minute or two later, I watched Ichiro hit a home run. Cliff Lee needed 102 pitches to throw ten shutout innings against the Giants, and the Phillies still lost. Matt Cain followed a near-perfect game with nine more shutout innings. The Padres scored four runs. The Twins won a game in New York, and not against the Mets. The most incredible thing that happened, though, happened in Anaheim, where Bartolo Colon threw 38 consecutive strikes.

He threw 38 consecutive strikes. You presumably already knew that, but now stop and think about it. Don't just read about it. Read the first sentence of this paragraph again, then close your eyes, lean back, and consider it. I've thought about writing articles before when Jonathan Sanchez throws three consecutive strikes. Between the first pitch of the fifth inning and the eighth pitch of the eighth inning, Bartolo Colon didn't throw a ball. He actually threw 38 balls, but all of them went for strikes.

Colon didn't know what kind of run he was on at the time. And perhaps most unfortunate for Colon is that the most impressive thing we've learned from Colon's achievement is that the previous consecutive-strike record, at least in recent history, belonged to knuckleballer Tim Wakefield. Immediately you want to forget about Colon and think about Wakefield. How did that happen? What were the circumstances? Was it unusually windy? Was it unusually calm? Did Wakefield just throw a bunch of consecutive fastballs and allow a bunch of consecutive line drives?

But this is about Colon, because I think his streak is worthy of further discussion. Over at FanGraphs, Dave Cameron calculates the odds of such a streak - by Colon - being approximately one in some millions. So, it was an unlikely thing. And below, I'm going to show you two charts: one of Colon's pitch locations outside of the streak, and one of Colon's pitch locations during the streak.

First, outside of the streak. Here are all of Colon's pitches, excluding the 38 consecutive strikes. I cannot stress enough that the strike-zone box is an approximation. Do not take the strike-zone box as gospel. It is there only to give a better understanding of where the pitches went. 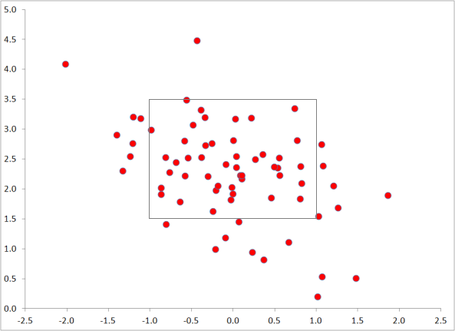 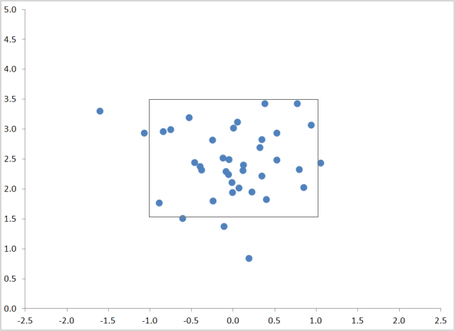 Thirty-eight consecutive strikes do not necessarily mean 38 consecutive pitches in the strike zone, but Colon threw most of those strikes within the strike zone. That pitch around -1.6 on the x-axis - 1.6 feet from the center of the plate, inside on a righty - was this 0-and-2 pitch to Erick Aybar: 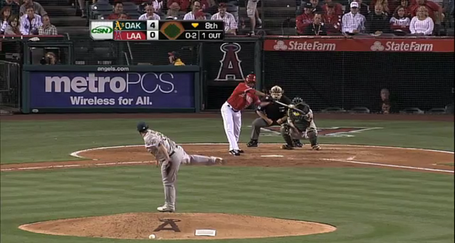 It was a running fastball, and Aybar had to protect in an 0-and-2 count. He fouled the pitch off. Meanwhile, that pitch around 0.8 on the y-axis was this 1-and-2 pitch to Maicer Izturis: 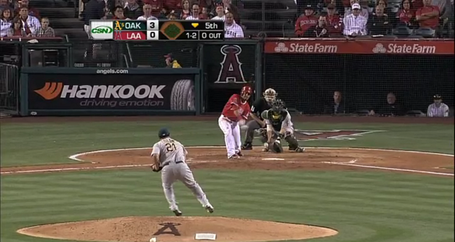 It was a low slider - the only slider Colon threw during the streak - and, again, Izturis had to protect in a two-strike count. He grounded the ball in play. This was Colon's fourth pitch of the streak, so at this point, Colon didn't even really have a streak.

When you think of Bartolo Colon, you might not automatically think of a guy who pounds the zone. You probably think about pounds, because people make fat jokes, but ... well I don't know what the collective impression of Bartolo Colon is. But since the beginning of 2011, he's thrown nearly 55 percent of his pitches in the zone. That's 12th-best in baseball, out of 150 pitchers with at least 100 innings. Nobody ever expects a guy to throw 38 consecutive strikes, or even half as many consecutive strikes, but it figures it would be a guy like this. Or Cliff Lee. Did Cliff Lee throw any balls at all in his ten innings Wednesday night? Has anyone checked? I feel like we all kind of take Cliff Lee for granted.

Anyway, Bartolo Colon did something amazing. It's amazing that Bartolo Colon is back and pitching well in the first place, given what he went through, but to do this? We don't have enough data to know if Colon set an all-time record, but he set at least a modern-day record, and it might be one of them unbreakable records. Good luck, pitchers. By which I mean good luck, Cliff Lee. Because let's be honest, the only guy with a chance is Cliff Lee.