Death At The Ballpark

An interview with Molly Lawless, author of the new graphic novel Hit By Pitch: Ray Chapman, Carl Mays and the Fatal Fastball.

Share All sharing options for: Death At The Ballpark

Molly Lawless is a cartoonist and illustrator from Boston, and the creator of Frog & Owl, one of the great comic strips of our day. An avid fan of pre-World War II baseball, she recently wrote and illustrated her first graphic novel, Hit By Pitch: Ray Chapman, Carl Mays and the Fatal Fastball, published by McFarland. Earlier this week I sat down ... in a room by myself, thousands of miles away, and transmitted questions to her via the enormous network of computers known as the Internet. She was gracious enough to answer them.

When did you first hear the story of Chapman and Mays?

My dad had this old baseball encyclopedia that I used to read over and over when I was a kid. It was incredibly exhaustive, with footnotes denoting everything you could think of that could possibly happen over the course of a season, one of which was the (obviously rare) instance of an active player's death. So that's how I learned that a guy named Ray Chapman had died after being hit by a pitch. I knew the basics of the story but it wasn't until I read Mike Sowell's The Pitch That Killed a few years ago that I really became obsessed with it.

What's the biggest misconception people have about the Chapman/Mays story?

Most people think that a spitball killed Chapman, and that his death led to the banning of the spitball and other "trick pitches" -- the reality is that the spitball was already being phased out, starting that season. A couple of pitchers per team were grandfathered in and allowed to throw the spitter in 1920, but Carl Mays wasn't one of them, and there's no evidence that the ball that hit Chapman was doctored. Mays was accused of messing with the ball at various points in his career which isn't surprising -- his delivery was unusual and hard to track -- but he was probably no more guilty of this than anyone else at the time.

Was the pitch that killed Chapman a beanball (as Wikipedia says)? That is, did Mays intend to hit Chapman?

We'll never know for sure. Mays had a reputation as a headhunter before this even happened, which made it all too easy for people to assume he hit Chapman on purpose. Then again, Chapman crowded the plate and seemed to be preparing to bunt. If Mays meant to brush him back I'm sure he expected Chapman to at least try to get out of the way, and eyewitness accounts indicate he didn't -- visibility was poor, the ball was dirty, and for whatever reason, Chapman never moved.

You seem to sympathize with Mays by the end of the book. Is that a fair reading? Did your feelings about Mays change while you were researching the book?

Definitely. It seems like a standard good guy vs. bad guy story at first -- poor, popular Ray Chapman meets a tragic end at the hand of this weirdo Carl Mays who no one ever liked anyway -- but it's much more complicated than that. Working on this book really humanized him for me. According to virtually all accounts, Mays was really difficult, not an easy guy to like or sympathize with personally -- but he had to live with that pitch for the rest of his (long) life, and I wouldn't wish that on anyone. 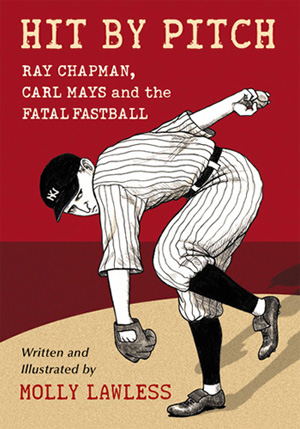 How would you describe your drawing style? Who are your influences as an artist?

I guess I'd describe my style as cartoony realism? Is that a thing? As far as my influences go, Charles Schulz, Daniel Clowes, Norman Rockwell, and Maurice Sendak are the big ones. I know, pretty standard, but I love them.

There's so much texture and detail in your drawings. How long does it take to illustrate a panel?

It really varies widely. I hope that's not a total cop out of an answer. Some of the most detailed ones can take the least amount of time, depending on how specific my idea of the image was before committing it to paper. It also depends on what reference images or research I need to refer to, whether it's something or someone I've drawn before, et cetera.

What's next? Another baseball book? A sequel to Frog & Owl?

I am very slowly working my way towards amassing enough strips for a Frog & Owl sequel, yes! My next baseball project will be a book of my Great Moments In Baseball comics, which is a series I started a while ago and will be getting back to soon. They're one-page treatments of events like Merkle's Boner and Wally Pipp's alleged headache.

I can't wait. Thanks very much for doing this.