Video Games Of Old: Debating The Very Worst Intro Of All Time

Last week, we examined the very best intro sequences from sports video games of years past. Now, it's time to take our medicine and sort through the very worst. Man. The 20th century was horrible.

Share All sharing options for: Video Games Of Old: Debating The Very Worst Intro Of All Time

Welcome to our second installment of Video Games Of Old. Last time, we visited and debated the very greatest intro sequences from sports video games of yesteryear. Well, this time around, we're examining the very worst of all time.

Video game intros are important, especially if it's a sports game. You need something to get you super-stoked. These, for one reason or another, did not do that. At the bottom, feel free to cast your vote for the worst. And if I happened to miss one that was even worse, by all means, let us know in the comments. But before we get into it, here's me giving you a video primer on the worst intro sequences:

And now, further explanation of each nominee ...

uh, we're playing Nintendo, we're kind of busy, what do you want

"We finally figured out how to make a snappy intro sequence!"

ok, so, why are they dancing

"Because they're basketball players!"

how much time did you guys spend on that

actually don't, i will probably be busy being an old-ass man riding dinosaurs on a holodeck because it will be the year 2054

RBI Baseball 4 is my favorite baseball game of all time. I can play it today and have just as much fun as I did when I was 10 years old.

But 10-year-old me and present-day me agree on something else: this intro is totally clownshoes.

Your first clue that the people who produced this intro sequence did not give two quarters of a damn: there's no sound. Even the worst, most cheaply-made Nintendo games had music of some sort. Play "Chopsticks." I don't care. Something.

And I feel that this warrants some deconstruction:

Whew. Thanks for indulging me, y'all. I asked those questions nearly 20 years ago AND I AM STILL ASKING THEM.

God, the Dreamcast was awesome. The graphics were incredible for the time, and a lot of the games actually look pretty decent over a decade later. The console had a built-in modem, so you could play online. The controllers had little screens on them, so you could call plays without your opponent screen-looking.

It was revolutionary, and so was NFL 2K. But its opening sequence -- specifically, the narration -- was the worst.

As we roll the calendar over to the big 2000, people are raising questions about what the next millennium will have in store.

Y2K happened and everybody died. Sorry guys. This sentence is being inadvertently typed by a two-pound cockroach walking across a keyboarlnglrleaklnvd,s,,snoi

In a game where millions of viewers, and thousands of fans, watch a battlefield of 100 yards, for 60 minutes,

Aw shit, are we supposed to be writing this down?

Eh, whatever, I'm checking out. I'll just copy off Schmo in homeroom tomorrow. Gonna just play Snake on my TI-83 until class is over.

fight for the right to one. Single. Ball.

I mean, that's ... that's the number of footballs I was expecting. It's like the Sega project leads had a meeting, and one of them stood up and said, "You know how many footballs we're going to have in this game? ONE." and everyone else in the room high-fived, except for the one scowling guy who forwarded the "six footballs and a wheelbarrow full of potatoes" proposal.

It's a shame this game didn't take off. I feel like it could have launched a franchise and spawned other titles such as Anthony Mason's Technical Foul Outpost and Craig Ehlo's Free Throw Hamlet. But Slam City with Scottie Pippen, like many Sega CD titles, was a God-awful, not-fun video game.

Also, like many Sega CD titles, it seemed like the developer was more interested in a SUPER XTREME opening sequence than making the actual game fun to play. HEALTH ADVISORY: this is one of the most 1990s things you will ever see.

Slam City, the city, thrives on a dunk-driven economy and is basically this giant graffiti-ed Hooverville where the sport of basketball is reduced to yelling, shoving each other, and wrestling around for a loose ball while making grunting noises. There's also a duo performing a Vaudeville dance act that absolutely nobody is watching. 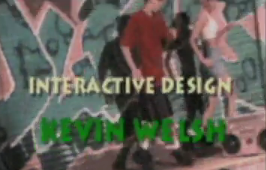 P.S. there's a strange meta-twist to this. I started the above video 26 seconds in so you wouldn't have to see it, but if you click through to YouTube and watch the whole thing, it features the very worst, most annoying intro to a YouTube video I've ever seen. Check it out (don't check it out)!

The year: 1998 (p.s. this game was released in 1998, so this makes a lot of sense). The place: Atlanta, Ga. -- or, from the looks of it, an undeveloped area outside of Atlanta that has been zoned for future development of an outlying suburb where nobody should live. I know Towne Lake when I see it. I do not know what this billboard is advertising.

Probably yogurt. Moving on: this truck is carrying a freight full of OMINOUS to its intended destination, when suddenly it comes across Sting, standin' in the middle of the road, wielding a pruning saw (?), just kinda chilin' out near a couple of hobo barrels. Swear to God, y'all, I think every single video game between like 1996 and 2002 had hobo barrels scattered around in it.

So upon seeing this, the truck screeches to a halt. Sting stands motionless. There is a long, nerve-racking pause. And then: 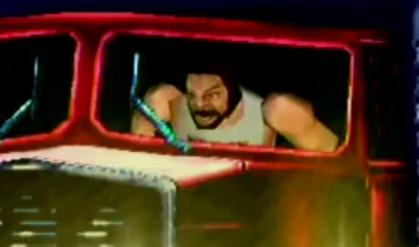 Okay, got that? A truck driver sees a guy hanging out in the middle of the road and is surprised. That should provide all the back-story you need. Time for wrestling! Hope you brought your wrestles!

VOTE! And for more, check out our roundup of the greatest intro sequences of all time.